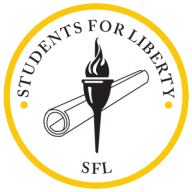 Students For Liberty (SFL) is an international libertarian non-profit organization (with origins in the United States whose stated mission is "to educate, develop, and empower the next generation of leaders of liberty". Formed in 2008 after a meeting at which students shared ideas and experiences about classical liberal student groups, SFL has since grown into a full organization with various programs and a network of affiliated student groups.

LearnLiberty.org
A project of Students for Liberty (formerly of the Institute for Humane Studies), also known as SFL Academy, with a worldwide faculty of over 300 experts

Learn Liberty is your resource for exploring the ideas of a free society. We tackle big questions about what makes society free or prosperous and how we can improve the world we live in.
Related Topic: Liberty
StudentsForLiberty.org - Students for Liberty
Website sections include: programs and events, virtual reading groups, literature and blogs

Wolf von Laer: ... Students for Liberty is a worldwide active organization that focuses on empowering the next generation of leaders of liberty. What does that mean? So, we are really reaching out to students here in the United States and across the world who are interested in classical Libertarian thoughts ... And once we identify these people, we're going to train them more in how to do advocacy. How to be a good Libertarian, but also how to reach out to others and organize events. So, just last year alone, we had 98 conferences all around the world with 20,000 attendees. And we do this with a $3.9 million budget ...
Related Topics: Brazil, France, Georgia, Libertarianism, Ron Paul

The introductory paragraph uses material from the Wikipedia article "Students for Liberty" as of 16 Jul 2018, which is released under the Creative Commons Attribution-Share-Alike License 3.0.