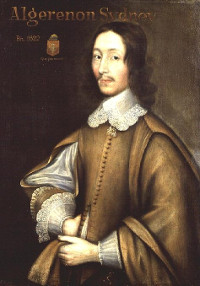 Algernon Sidney or Sydney (14 or 15 January 1623 – 7 December 1683) was an English politician and member of the middle part of the Long Parliament. A republican political theorist, colonel and commissioner of the trial of King Charles I of England, he opposed the king's execution. Sidney was later charged with plotting against Charles II, in part based on his most famous work, Discourses Concerning Government, used by the prosecution as a witness at his trial. He was executed for treason. After his death, Sidney was revered as a "Whig patriot–hero and martyr".

Algernon Sidney was a statesman and philosopher. Sidney is best known for conspiring to rebel against Charles II of England and for his subsequent beheading for his participation in activities against the king. However, his primary significance lies in the political theory he offered in his book Discourses Concerning Government, published posthumously, which was of tremendous influence in the American colonies. ... According to one study, Sidney's Discourses Concerning Government was the third most common political book in colonial libraries, behind only John Trenchard and Thomas Gordon's Cato's Letters and John Locke's Two Treatises of Government.

Algernon Sidney (1622-1683) was a radical English republican political theorist who challenged Filmer’s theory of the divine right of kings. He was executed for treason in 1683.
Freedom Fighters » Algernon Sidney
Quotation and links to selected online resources by and about Sidney

Algernon Sidney: A Father of the Declaration of Independence, by Dave Kopel, The Washington Post, 3 Jul 2016
After a short biography, discusses the main themes made by Sidney in Discourses Concerning Government, written in response to Robert Filmer's Patriarcha, which defended the divine right of kings

Sidney fought bravely with the parliamentary forces during the English Civil War of 1642-1646, and lived in exile in France after the Restoration of the Stuart monarchy in 1660. Starting in 1681, when fears over the Stuarts' totalitarian ambitions grew intense, Sidney, who had returned to England, worked assiduously to organize the overthrow of the Stuarts. In 1683, Sidney was arrested for treason. He was convicted in a trial that was later regarded as a travesty of justice, not allowed to see the indictment against him. Executed on Dec. 7, 1683, Sidney was venerated by the Americans as one of the greatest martyrs of liberty.
Related Topic: Right to Keep and Bear Arms
Algernon Sidney: Forgotten Founding Father, by Chris Baker, The Freeman, Oct 1997
Biographical essay discussing also Sidney's political theories and his influence in the American colonies

Algernon Sidney (also Sydney) was an English martyr for republican government. He was executed in 1683 for allegedly conspiring to kill King Charles II; his political writings were used as "evidence" against him. His uncompromising spirit inspired both the Glorious Revolution of 1688 and the American Revolution of 1776 ... American slavery abolitionists like William Lloyd Garrison borrowed another line: "That which is not just, is not Law; and that which is not Law, ought not to be obeyed." Samuel Adams gave Algernon Sidney the most accurate label of all—"patriot." In a nation of liberty-loving people, he can be nothing less.
Related Topics: Government, Hugo Grotius, John Locke
The Growth of Libertarian Thought, by Murray N. Rothbard, Conceived in Liberty
Volume II, Part II "Intercolonial Developments", Chapter 33: Starts by considering the influence of English writers Sidney and Locke and then considers Trenchard and Gordon's Cato's Letters

Algernon Sidney was one of the leading theorists of the Republican movement in seventeenth-century England. ... Revolution to Sidney was not an evil but the people's great weapon for the overthrow of tyranny ... There was nothing sacred about governments, which on the contrary should be changed as required.
Related Topic: John Locke
Popular Sovereignty: A Biography of Algernon Sidney, by Jim Powell, The Triumph of Liberty, 4 Jul 2000
Biographical essay

The influential English agitator and thinker Algernon Sidney championed popular sovereignty back when kings ruled the earth. For years, he stirred opposition to the English king Charles II, for which he was hunted by assassins. He spoke out against slavery in the British West Indies. There were two attempts on his life, and he suffered an ultimate tragedy—beheading. He became the most famous English martyr for liberty.His major work, Discourses Concerning Government, appeared in 1698, 15 years after his execution, and it did much to develop the case for liberty that was to inspire Americans and sweep the world.
Related Topics: Law, John Locke, Massachusetts

Discourses Concerning Government, 1698
Partial contents: To depend upon the will of a man is slavery - God leaves to man the choice of forms in Government - That 'tis natural for Nations to govern, or to choose Governors - Government is not instituted for the good of the Governor
Related Topic: Government

The introductory paragraph uses material from the Wikipedia article "Algernon Sidney" as of 5 Jun 2018, which is released under the Creative Commons Attribution-Share-Alike License 3.0.