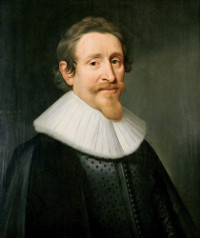 Hugo Grotius (10 April 1583 – 28 August 1645), also known as Huig de Groot or Hugo de Groot, was a Dutch jurist. Along with the earlier works of Francisco de Vitoria and Alberico Gentili, Grotius laid the foundations for international law, based on natural law. A teenage intellectual prodigy, he was imprisoned for his involvement in the intra-Calvinist disputes of the Dutch Republic, but escaped hidden in a chest of books. He wrote most of his major works in exile in France.

One of the pioneering natural rights theorists of the late 16th and early 17th centuries, Grotius defined natural law as a perceptive judgement in which things are good or bad by their own nature. This was a break from Calvinist ideals, in that God was no longer the only source of ethical qualities. These things that are by themselves good are associated with the nature of man. ... Grotius' conception of the nature of natural law is set forth in his works De Jure Praedae (Commentary on the Law of Prize and Booty) and De Jure Belli ac Pacis (On the Law of War and Peace).

Hugo Grotius (1583-1645) was a Dutch scholar and jurist whose legal masterpiece, De Jure Belli ac Pacis (On the law of war and peace) (1625), contributed significantly to the formation of international law as a distinct discipline. In addition to that work, Grotius wrote a number of literary pieces of lasting merit, including Sacra (a collection of Latin poems) and the drama Christus Patiens. Like Erasmus, Grotius sought to end the religious schism and urged the papacy to reconcile with the Protestant faiths.

As an adolescent, Sidney traveled with his father to Denmark, France, and Rome. In Paris, he met the Dutch-born diplomat and political theorist Hugo Grotius, who was representing Sweden at the French court ... A more accurate title for the Discourses [Concerning Government] might be History of Liberty. Throughout the book are references to the works of Hugo Grotius, Livy, Niccolò Machiavelli, Cornelius Tacitus, Plutarch, Plato, and Aristotle. Sidney was most impressed by the Bible, Livy's History of Rome, and Grotius's The Law of War and Peace.
Related Topics: Government, John Locke, Algernon Sidney
America's Two Just Wars: 1775 and 1861, by Murray N. Rothbard, The Costs of War, May 1994
Based on a talk given at the Mises Institute's Costs of War conference, published in The Costs of War: America's Pyrrhic Victories, John V. Denson (editor)

Much of 'classical international law' theory, developed by ... the Dutch Protestant Scholastic Grotius and by 18th- and 19th-century jurists, was an explanation of the criteria for a just war. ... Hugo Grotius and conservative natural lawyers believed that the delegation of sovereignty, once transferred, was irrevocable, so that sovereignty must reside permanently in the king.
Related Topics: American Revolutionary War, American War Between the States, Somalia, War
Natural Law and Peace: A Biography of Hugo Grotius, by Jim Powell, The Triumph of Liberty, 4 Jul 2000
Biographical essay

All his life, Grotius displayed an extraordinary passion for knowledge. He was considered a child prodigy. He achieved impressive things as a young man. He managed to continue learning when he was in prison. His most famous work, De Jure Belli ac Pacis [The Law of War and Peace] was written when he was an impoverished refugee, and it cited about 120 ancient authors (Cicero was his favorite). Grotius' learning helped him make friends among Catholics and Protestants, although Catholics and Protestants were killing each other.
Related Topics: Law, Netherlands, Rights, War

On The Law Of War And Peace, 1625
Partial contents: On War and Right - Inquiry Into the Lawfulness of War - Defense of Person and Property - On the Unjust Causes of War - The Causes of Undertaking War for Others - What is Lawful in War - Respecting Those Who are Neutral in War
Related Topic: War

22nd March 1621: Hugo Grotius escapes prison by hiding in a book chest, 21 Mar 2016
Relates the story of how Grotius managed to escape from life imprisonment, as well as a few other details of his life

Grotius is known as one of the founding fathers of international law for his written work in such masterpieces as 'On the Law of War and Peace' and 'The Freedom of the Seas' that applied natural law to international politics. Even as a teenager his intellectual ability had been noted by King Henry IV of France who referred to him as the 'miracle of Holland'.

The introductory paragraph uses material from the Wikipedia article "Hugo Grotius" as of 11 Jul 2018, which is released under the Creative Commons Attribution-Share-Alike License 3.0.