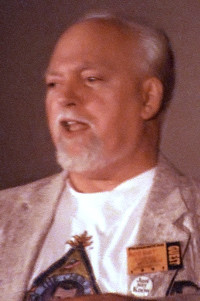 A college newspaper called him a 'sage, a prophet, a psychologist, a guru, a futurist, a guerilla ontologist, an adept, and a postmodernist.' An audiotape company called him a 'visionary, poet, futurist, and libertarian philosopher.' And a movie reviewer called him a 'raconteur, gadfly, libertarian, conspiracist, stand-up comedian, poet, prankster, mystic, and madman.' Take your pick; they may all be true.
Robert Anton Wilson - Libertarianism.org
Short profile and links to essays, videos and other resources about Wilson

Dr. Robert Anton Wilson was the author (along with Robert Shea) of the popular Illuminatus! trilogy, which won the Prometheus Hall of Fame award for science fiction in 1986. His other books have found great acclaim as well, many of them achieving 'cult classic' status. Wilson has been described at various times throughout his life as a novelist, philosopher, psychologist, essayist, editor, playwright, poet, futurist, civil libertarian and agnostic mystic.

Check Your History, by B. K. Marcus, 11 Mar 2014
Discusses the leftist meme "check your privilege" (criticized in another article by Sarah Skwire) and offers a second, historical point based on the etymology of the word "privilege"

My own path out of the default leftism I grew up with ... did not begin with Ayn Rand or Murray Rothbard. Of greater influence was Robert Anton Wilson's Illuminatus! trilogy. In a scene ... we find our anarchist hero Hagbard Celine ... undercover at a Council on Foreign Relations banquet. The topic of conversation is Mortimer Adler's claim that 'we and the Communists share the same Great Tradition ... and we must join together against the one force that really does threaten civilization—anarchism!' Our hero interrupts the ensuing conversation ...
Related Topic: The State
Illuminated Manuscripts: The legacy of Robert Anton Wilson, by Jesse Walker, 16 Jan 2007
Short memorial essay, noting the paucity of attention to Wilson's death in the mainstream press contrasted to the multiple tributes on the internet

The novelist, satirist, journalist, and philosopher Robert Anton Wilson passed away last Thursday, just a week shy of his 75th birthday. When he was alive he sometimes complained—or maybe it was a boast—that his books were never reviewed in The New York Times. The paper of record did pay its respects when he died, though, with a brief piece about his life and work. It wasn't entirely accurate, but the author of Illuminatus! would have enjoyed that. ... Given his enormous influence on pop culture, from Lost to Laura Croft, you might have expected Wilson's death to get more attention in the mainstream press.
Live From Chapel Perilous: We're living in Robert Anton Wilson's world, by Jesse Walker, Reason, Dec 2003
Contrasts Thomas Pynchon's Gravity's Rainbow and Wilson's (and Robert Shea's) Illuminatus! and argues that Wilson has had a much larger cultural influence than Pynchon

Robert Anton Wilson is the unacknowledged elephant in our cultural living room: a direct and indirect influence on popular books, movies, TV shows, music, games, comics, and commentary. ... Wilson is a primary source for the ironic style of conspiracism, a sensibility that treats alleged cabals not as intrigues to be exposed or lies to be debunked but as a bizarre mutant mythos to be mined for laughs, metaphors, and social insights. ... Somewhere between absolute belief and absolute incredulity, he tells us, the universe contains a maybe. To which anyone who follows the news these days can reply: No doubt.
Robert Anton Wilson, by Jeff Riggenbach, 15 Aug 2011
Biographical essay, including a lengthy digression on the thought of Ralph Borsodi, founder of the publisher of a magazine co-edited by Wilson in the early 1960's; transcript of "The Libertarian Tradition" podcast of 4 Aug 2011

Robert Anton Wilson was born January 18, 1932 in Brooklyn ... From Brooklyn Tech he went, in 1952, after a couple of years of working and saving his money, to the Polytechnic Institute of Brooklyn ... As the early sixties became the midsixties, he moved on to Ralph Ginzburg's Fact back in New York, and then to Hugh Hefner's Playboy in Chicago. He stayed there seven years ... The biggest success of his subsequent freelance career was Illuminatus!, a three-volume satirical novel written in collaboration with fellow late-sixties Playboy editor Robert Shea.
Related Topics: Libertarian Futurist Society, Libertarian Party, Benjamin Tucker

The introductory paragraph uses material from the Wikipedia article "Robert Anton Wilson" as of 19 Jul 2018, which is released under the Creative Commons Attribution-Share-Alike License 3.0.