Patrick McGoohan - Hero of the Day 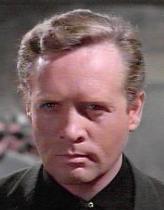 English actor Patrick McGoohan gained stardom in the early 60s as John Drake in the spy series "Danger Man" (released in the United States as "Secret Agent," and probably best remembered in the U.S. for the theme music by Johnny Rivers). He has won two Emmy Awards for his memorable guest appearances on "Columbo."

Throughout his career, McGoohan has held fast to his political, social, and religious convictions, much to the detriment of his professional career. For instance, because of his religious beliefs, McGoohan has refused to perform romantic scenes. (While Objectivists may not find the reasons behind this refusal to be very palatable, at least he stuck to his guns.) McGoohan also more than once turned down the role of James Bond on moral grounds, and he has declined many traditional "leading man" roles.

But what really recommends McGoohan to the attention of individualists is his masterpiece of social commentary, the British cult series "The Prisoner" (1967-68). The premise of this series was that a British secret agent (presumably John Drake, though the character was never named) who resigns his posts has been kidnapped and taken to a surrealistic prison camp called The Village.

The Village, based on an actual camp run by the British government in Scotland during World War II, is a place where people are brought to have their knowledge protected or extracted. Inmates include scientists who had worked on top secret projects, former secret agents, etc. Every inmate is assigned a number (McGoohan's character is Number 6), and each lives by the Village mottoes: "A Still Tongue Makes A Happy Life" and "Questions Are A Burden For Others; Answers A Prison For Oneself."

The Village is managed by Number 2, on behalf of the unseen Number 1. Number 2 is a different person in every episode. He represents temporal, political authority, while Number 1 is the real power behind The Village. Among the inmates are undercover agents of Number 2, actual prisoners who have defected to the side of Number 2, and those whose wills have been broken by their keepers.

Each episode of "The Prisoner" involves an attempt by "the new Number 2" to break Number 6. The methods employed include brainwashing, mind-altering drugs, and even the court of public opinion (i.e. the other inmates of The Village). Through it all, Number 6 holds true to the declaration uttered at the beginning of each episode: "I am not a number, I am a Free Man!"

McGoohan conceived the series and wrote and/or directed several episodes, either under his own name or a pseudonym. Those associated with the series, however, have said that McGoohan actually wrote, re-wrote, re-shot, edited, and/or re-edited virtually every episode. The series was very much McGoohan's own vision, and interviews with McGoohan make clear that the philosophy of individualism articulated in the series was his own as well.

The series lasted only 17 episodes, in 1967 and 1968. Although McGoohan was the highest-paid TV actor in Britain at that time, he quickly alienated viewers, and the series was abruptly cancelled. The final episode, in which the identity of Number 1 is finally revealed, allegedly led angry viewers to make death threats against McGoohan, as a result of which he relocated to Los Angeles.

Many of the concepts introduced in "The Prisoner" were science fiction in 1967. Today, they are everyday occurrences. Number 2 has access to files regarding every aspect of the lives of the inmates of The Village, and his agents maintain constant surveillance of the inmates through the use of hidden cameras and microphones. The population of The Village is controlled through the manipulation of the media, and most of Number 6's fellow inmates are all too willing to turn against him for his "unmutual" or "undemocratic" beliefs. Those who speak out against Number 2's authority may find themselves in "rehabilitation" or "therapy," or may find themselves attacked in the local press. In depicting the society that he feared we were becoming, McGoohan presented an accurate report of America under Clinton-Gore.

McGoohan is a pillar of integrity and, through "The Prisoner," a champion of individual rights. "The Prisoner" is the story of one man's war against society, the individual's constant struggle to maintain integrity and freedom in the face of "democratic" opposition.