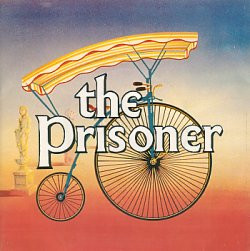 The Prisoner is a 17-episode British TV series first broadcast in Canada beginning on 6 September 1967, then in the UK on 29 September 1967 and in the US on 1 June 1968. It stars and was co-created by Patrick McGoohan, and combines spy fiction with elements of science fiction, allegory and psychological drama.

DoniaCorp's "The Prisoner" Page - Ordering the Episodes, by Theresa Donia
Examines various orders for the episodes, including logical, chronological and psychological, and offers her own recommended viewing sequence
From The Pen Of Chris Gregory - The Prisoner Episode By Episode, by Chris Gregory, 9 Sep 2009
Extended summaries of each episode, intended as companion to Be Seeing You: Decoding "The Prisoner"
Patrick McGoohan - Hero of the Day, by Erik Snow, The Daily Objectivist, 2000

The Village is managed by Number 2, on behalf of the unseen Number 1. Number 2 is a different person in every episode. He represents temporal, political authority, while Number 1 is the real power behind The Village. ... Each episode of 'The Prisoner' involves an attempt by 'the new Number 2' to break Number 6. The methods employed include brainwashing, mind-altering drugs, and even the court of public opinion (i.e. the other inmates of The Village). Through it all, Number 6 holds true to the declaration uttered at the beginning of each episode: 'I am not a number, I am a Free Man!'
Related Topics: Patrick McGoohan, Science Fiction
The Troyer Interview, by Patrick McGoohan, Warner Troyer, Mar 1977
Transcript of interview originally broadcast on TVOntario, the public TV network which had shown "The Prisoner" series in Canada

McGoohan: ... I had sat down and I wrote a 40-page, sort of, history of the Village, the sort of telephones they used, the sewerage system, what they ate, the transport, the boundaries ...
Troyer: What about the philosophy, the rationale of the Village? What did you tell them about that? Its raison-d'etre, not its mechanics...
McGoohan: (very deliberately) It was a place that is trying to destroy the individual by every means possible; trying to break his spirit, so that he accepts that he is No. 6 and will live there happily as No. 6 for ever after. And this is the one rebel that they can't break.

Be Seeing You: Decoding "The Prisoner"
by Chris Gregory, 1997

The introductory paragraph uses material from the Wikipedia article "The Prisoner" as of 15 Oct 2018, which is released under the Creative Commons Attribution-Share-Alike License 3.0.