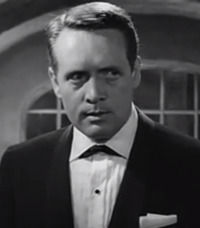 Patrick Joseph McGoohan (19 March 1928 – 13 January 2009) was an American-born Irish actor, writer and director who was brought up in Ireland and England. He began his career in Great Britain in the 1950s, and relocated to the United States in the 1970s. His career-defining roles were in the British 1960s television series Danger Man (US: Secret Agent) and the surreal psychological drama The Prisoner, which he co-created.

Patrick McGoohan, the patron saint of DoniaCorp, passed away on January 13, 2009 at the age of 80. We scrambled to put up an RIP notice and a guestbook to invite people to share their memories of Mr. McGoohan. ... If we wanted a fitting tribute for Mr. McGoohan, we should give it a nice home.
Related Topic: The Prisoner

Patrick Joseph McGoohan was born at 4:31 a.m. on March 19th, 1928 in Astoria, Long Island, New York. His father, Thomas McGoohan was an Irish farmer who had married Rose Fitzpatrick in the 1920's. ... A local youth club was putting on an amateur production and McGoohan got his first role. ... McGoohan was ready to end his role as John Drake after a total of 86 episodes, culminating in two one-hour specials filmed for the first time in colour. After some discussion, he was given the go ahead by Lew Grade to produce a new ITC series in colour called The Prisoner.

Though born in America, Irish actor Patrick McGoohan rose to become the number-one British TV star in the 1950s to 1960s era. His parents moved to Ireland when he was very young and McGoohan acquired a neutral accent that sounds at home in British or American dialogue. ...
Actor (63 credits) ... 2002 ... 1954
Producer (2 credits)
Director (6 credits)
Writer (2 credits)

Patrick McGoohan - Hero of the Day, by Erik Snow, The Daily Objectivist, 2000

English actor Patrick McGoohan gained stardom in the early 60s as John Drake in the spy series 'Danger Man' (released in the United States as 'Secret Agent' ...). He has won two Emmy Awards for his memorable guest appearances on 'Columbo.' ... But what really recommends McGoohan to the attention of individualists is his masterpiece of social commentary, the British cult series 'The Prisoner' (1967-68). The premise of this series was that a British secret agent (presumably John Drake, though the character was never named) who resigns his posts has been kidnapped and taken to a surrealistic prison camp called The Village.
Related Topics: The Prisoner, Science Fiction

The Troyer Interview, by Patrick McGoohan, Warner Troyer, Mar 1977
Transcript of interview originally broadcast on TVOntario, the public TV network which had shown "The Prisoner" series in Canada

I'm very gratified because, when it came out originally, in England, there were a lot of haters of it. A love/hate relationship ... Already there was a small cult. Now there's a much bigger one over there. In fact, when the last episode came out in England, it had one of the largest viewing audiences, they tell me, ever over there, because everyone wanted to know who No. 1 was, because they thought it would be a 'James Bond' type of No. 1. When they did finally see it, there was a near-riot and I was going to be lynched. And I had to go into hiding in the mountains for two weeks, until things calmed down. That's really true!
Related Topic: The Prisoner

The introductory paragraph uses material from the Wikipedia article "Patrick McGoohan" as of 26 May 2018, which is released under the Creative Commons Attribution-Share-Alike License 3.0.