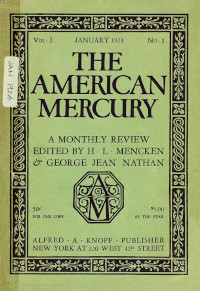 The American Mercury was an American magazine published from 1924 to 1981. It was founded as the brainchild of H. L. Mencken and drama critic George Jean Nathan. The magazine featured writing by some of the most important writers in the United States through the 1920s and 1930s. After a change in ownership in the 1940s, the magazine attracted conservative writers. A second change in ownership a decade later turned the magazine into a virulently antisemitic publication. It was published monthly in New York City. The magazine went out of business in 1981, having spent the last 25 years of its existence in decline and controversy.

Within a few years after its initial January 1924 issue, the Mercury would prove the most popular new magazine of the decade and one of the most influential magazines then in existence in the United States. The editors of the Mercury promised in the first issue to provide 'civilized entertainment,' to 'lay chief stress at all times upon American ideas, American problems, and American personalities,' and to 'attempt a realistic presentation of the whole gaudy, gorgeous, American scene.'

H.L. Mencken: The Soul Behind the Sass, by Thomas Hazlett, Reason, Dec 1987
Review of the second edition of Disturber of the Peace: The Life of H.L. Mencken by William Manchester

Mencken's deluge was awesome, as was its equal and opposite reaction, which reached virtual apoplexy after his founding of the outspoken and notorious American Mercury in 1923–24. 'It is difficult to describe ... the great wrath the Mercury inspired,' Manchester writes. 'A massive chorus of Rotarians, preachers, American Legion leaders, and college professors seemed to have organized itself for Mencken's private amusement; he had but to say the magic words and the chorus responded in a spluttering, hysterical hymn of vituperation. ...'
Related Topics: Evolution, H. L. Mencken
H. L. Mencken, America's Wittiest Defender of Liberty, by Jim Powell, The Freeman, Sep 1995
Biographical essay, highlighting Mencken's tenure at the Baltimore Sun, the books he authored, the founding and his work at the American Mercury monthly and his brief relationship with Sara Haardt

The introductory paragraph uses material from the Wikipedia article "American Mercury" as of 28 Aug 2018, which is released under the Creative Commons Attribution-Share-Alike License 3.0.