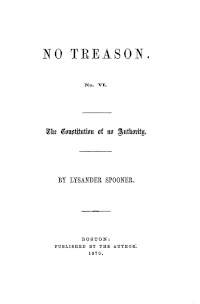 No Treason is a series of numbered essays written and published by Lysander Spooner between 1867 and 1870. No Treason: No. 1 (1867) deals with the implications of government by consent. No Treason: No. II: The Constitution (1867) examines the preamble of the United States Constitution and the definition of "treason" given in Article III. The better known No Treason: No. VI: The Constitution of No Authority was published in 1870, noting it was "in advance of" the third through fifth issues (which ended up not being published afterwards). No. VI argues that the Constitution cannot have authority or impose obligations on people currently living in the United States and discusses arguments about voting or the payment of taxes, denying those acts imply voluntary consent.

Lysander & Limited Government, by Fred Miller, Reason, May 1976
Argues that Spooner, although critical of the government instituted by the U.S. Constitution, was in favor of a legitimate, limited government, i.e., one that is voluntarily financed

"No Treason #6" is referred to, in hushed tones, as though it were a definitive treatise of anarchocapitalism. In fact, careful reading reveals that [it] is far from an argument for anarchism ... [A] popular Lysander Spooner poster ... begins, "For this reason, whoever desires liberty, should understand these facts ..." The poster only lists the first two of six such facts ... But the fact relevant here is the last: "That no government, so called, can reasonably be trusted for a moment, or reasonably be supposed to have honest purposes in view, any longer than it depends wholly upon voluntary support".
Related Topics: American War Between the States, United States Constitution, Government, Limited Government, Lysander Spooner, The State, Voting
Lysander Spooner on the National Debt, by Sheldon Richman, Future of Freedom, Jan 2014
Revised version of "The Goal Is Freedom" column of 27 Sep 2013; analyzes Spooner's severe criticisms of the arguments given for the legitimacy of the United States' public debt

My query ... assumes that Congress operates in a context of legitimacy ... It so happens that in section XVII of his 1870 essay, "The Constitution of No Authority" (Number 6 in his No Treason series), Spooner took up the question of government debt with his signature fresh look. As you might imagine, he left nothing standing. "On general principles of law and reason," Spooner wrote, "debts contracted in the name of 'the United States,' or of 'the people of the United States,' are of no validity." ... Earlier in the essay, Spooner handily disposed of the claim that voting or paying taxes implies consent.
Related Topics: Lysander Spooner, The State
Lysander Spooner, Part 2, by Wendy McElroy, Freedom Daily, Nov 2005
Lengthy biographical and bibliographical essay; this second part is from 1852 to Spooner's death, examining An Essay on the Trial by Jury, the No Treason essays and his subsequent influence

Until the Civil War, Spooner had labored to integrate the principles of the Constitution with those of natural law. No Treason ... rejected the idea that anyone was obliged to respect the Constitution ... The first No Treason—subtitled The Suppression of the Rebellion Finally Disposes of the Pretence That the United States Government Rests on Consent—was intended as the first of six pamphlets. But only two more appeared: No. II: The Constitution (1867), and No. VI: The Constitution of No Authority (1870). In introducing VI, Spooner noted that Nos. III, IV, and V did not exist but he did not explain their absence.
Related Topics: American War Between the States, United States Constitution, Government, Intellectual Property Laws, Liberty, Magna Carta, Lysander Spooner, Right to Trial by Jury, Benjamin Tucker, Voting