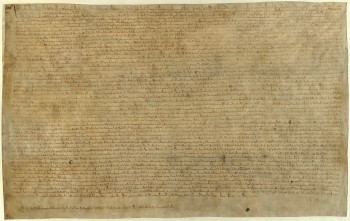 Magna Carta Libertatum (Medieval Latin for "the Great Charter of the Liberties"), commonly called Magna Carta (also Magna Charta; "Great Charter"), is a charter of rights agreed to by King John of England at Runnymede, near Windsor, on 15 June 1215. First drafted by the Archbishop of Canterbury to make peace between the unpopular King and a group of rebel barons, it promised the protection of church rights, protection for the barons from illegal imprisonment, access to swift justice and limitations on feudal payments to the Crown, to be implemented through a council of 25 barons. Neither side stood behind their commitments, and the charter was annulled by Pope Innocent III, leading to the First Barons' War. After John's death, the regency government of his young son, Henry III, reissued the document in 1216, stripped of some of its more radical content, in an unsuccessful bid to build political support for their cause. At the end of the war in 1217, it formed part of the peace treaty agreed at Lambeth, where the document acquired the name Magna Carta, to distinguish it from the smaller Charter of the Forest which was issued at the same time. Short of funds, Henry reissued the charter again in 1225 in exchange for a grant of new taxes. His son, Edward I, repeated the exercise in 1297, this time confirming it as part of England's statute law.

An Arrow against all Tyrants, by Richard Overton, 12 Oct 1646
Letter addressed to "Mr Henry Marten, a member of the House of Commons", after two months in Newgate Prison having been arrested for publishing "An Alarum to the House of Lords"

For the first, namely the exorbitances of the Lords: they are to such an height aspired, that contrary to all precedents, the free commoners of England are imprisoned, fined and condemned by them (their incompetent, illegal, unequal, improper judges) against the express letter of Magna Carta chapter 29 (so often urged and used): that no free man of England "shall be passed upon, tried, or condemned, but by the lawful judgement of his equals, or by the law of the land", which, as says Sir Edward Coke in his exposition of Magna Carta, p. 28, last line, is "per pares, by his peers, that is, by his equals".
Related Topics: Individual Liberty, Freedom of Religion, Self-ownership, Right to Trial by Jury
The Bill of Rights: Due Process of Law, by Jacob G. Hornberger, Freedom Daily, Nov 2004
Describes the origins of due process in the Magna Carta, the basic requirements of "notice" and "hearing", other guarantees (e.g., assistance of counsel, trial by jury of peers), habeas corpus and comments on the current state of affairs

Due process of law actually stretches back to the year 1215, when the great barons of England extracted an admission from their king ... Included among the restrictions on power to which King John acceded in the Magna Carta ... was a prohibition against the exercise of arbitrary seizure of people or their property ...: "No free man shall be seized or imprisoned, or stripped of his rights or possessions, or outlawed or exiled, or deprived of his standing in any other way, nor will we proceed with force against him, or send others to do so, except by the lawful judgement of his equals or by the law of the land."
Related Topics: Government, Writ of Habeas Corpus, Due Process of Law, Right to Trial by Jury
The Bill of Rights: The Rights of the Accused, by Jacob G. Hornberger, Freedom Daily, Feb 2005
Discusses the various clauses of the Sixth Amendment, with the rationales behind them and citing relevant court decisions

The importance of this right was emphasized by the U.S. Supreme Court in Klopfer v. North Carolina (1967): "We hold here that the right to a speedy trial is as fundamental as any of the rights secured by the Sixth Amendment. That right has its roots at the very foundation of our English law heritage. Its first articulation in modern jurisprudence appears to have been made in Magna Carta (1215), wherein it was written, 'We will sell to no man, we will not deny or defer to any man either justice or right'; but evidence of recognition of the right to speedy justice in even earlier times is found in the Assize of Clarendon (1166)."
Related Topics: Law, Terrorism, Right to Trial by Jury
Civil Liberty and the State: The Writ of Habeas Corpus, by Richard Ebeling, Freedom Daily, Apr 2002
Highlights of English and American history on the writ of habeas corpus, in particular the 17th century conflict between Charles I and Edward Coke

In English history, the barons had extracted the principle of due process of law from King John, in 1215, in the Magna Carta. Clause 39 of the Magna Carta guaranteed,

No free man may be taken or imprisoned, or ousted of his lands, or outlawed, or banished, or hurt in any way; nor will we [the king] go against him, nor send our officers against him, save by lawful judgment of his peers or by the law of the land.

In other words, under the principles of due process of law ("the law of the land") no free man could be put in prison and held there without legal justification.
Related Topics: Edward Coke, United States Constitution, England, Writ of Habeas Corpus, Petition of Right, Property
The Great Writ Then and Now, by Wendy McElroy, The Freeman, Nov 2009
Chronicles the history of the writ of habeas corpus from the Magna Carta through the American Civil War to Guantanamo Bay and "enemy combatants"

... the concept [of habeas corpus] is generally assumed to have been part of the common-law tradition at the time of Magna Carta. Signed in 1215 by King John, Article 39 states: "No freeman shall be taken, or imprisoned, or disseized, or outlawed, or exiled, or in any way harmed—nor will we go upon or send upon him—save by the lawful judgment of his peers or by the law." ... Magna Carta assumed political and legal prominence ... when it was reinterpreted ... by ... Sir Edward Coke ... The reinterpretation ... had a profound impact on the American colonies, the charters for which were drafted during this period.
Related Topics: American War Between the States, George W. Bush, Edward Coke, United States Constitution, Writ of Habeas Corpus, Jacob G. Hornberger, Inalienable Rights, No Quartering of Soldiers
An Independent Judiciary, by Jim Powell, The Triumph of Liberty, 4 Jul 2000
Lengthy biographical essay of Edward Coke; first chapter of section 9, "Protecting Liberty"

James [I] needed money, so he summoned Parliament in 1610, but reluctant members drew up a petition of grievances. Coke declared, "I must fly to Magna Carta and entreat explanation of his Majesty. Magna Carta is called ... The Charter of Liberty because it maketh freeman. When the King says he cannot allow our liberties of right, this strikes at the root." James fumed against Parliament, saying "I am surprised that my ancestors should ever have permitted such an institution to come into existence."
Related Topics: Standing Army, Edward Coke, Founding Fathers, Law, Occupational Licensing, Petition of Right, Protection Against Cruel and Unusual Punishments, Freedom of Religion, Right to Trial by Jury
Islam and the Discovery of Freedom, by George Leef, The Freeman, Sep 1998
Review of Islam and the Discovery of Freedom (1997) by Imad-Ad-Dean Ahmad, which is based on Rose Wilder Lane's The Discovery of Freedom (1943), with an introduction and scholarly commentary by Ahmad

Lane also argues that the West was exposed to the ideas of liberty that would in time lead to its ascendancy through contacts with Muslim traders and scholars. She notes that Spanish Catholics ... would not give up the liberty they had enjoyed under Islamic rule ... They demanded and got documents guaranteeing their freedoms. Ahmad adds that Magna Carta, to which Westerners trace the beginnings of the idea of limited government, resulted from pressure by English nobles who had returned from the Crusades, where they had learned that the Muslim leader Saladin was bound by the law the same as any other citizen.
Related Topics: Educational Freedom, Government, Rose Wilder Lane
Lysander Spooner, Part 2, by Wendy McElroy, Freedom Daily, Nov 2005
Lengthy biographical and bibliographical essay; this second part is from 1852 to Spooner's death, examining An Essay on the Trial by Jury, the No Treason essays and his subsequent influence

Thus Trial by Jury draws heavily on the Magna Carta, an early 13th-century document ... which acted as a charter of liberties through which the English nobility protected itself against the power of the Crown. The document is widely viewed as a milestone in the evolution of human liberty ... Spooner stated, "That the trial by jury is all that has been claimed for it ... is proved both by the history and the language of the Great Charter of English Liberties, to which we are to look for a true definition of the trial by jury, and of which the guaranty for that trial is the vital, and most memorable, part."
Related Topics: American War Between the States, United States Constitution, Government, Intellectual Property Laws, Liberty, No Treason, Lysander Spooner, Right to Trial by Jury, Benjamin Tucker, Voting
The Rights of the Colonists: The Report of the Committee of Correspondence to the Boston Town Meeting, by Samuel Adams, 20 Nov 1772
First of three reports of the Massachusetts Comittee of Correspondence, authored by Adams, presented to a town meeting by James Otis and later republished by Benjamin Franklin

Magna Charta itself is in substance but a constrained declaration or proclamation and promulgation in the name of the King, Lords, and Commons, of the sense the latter had of their original, inherent, indefeasible natural rights, as also those of free citizens equally perdurable with the other. That great author, that great jurist, and even that court writer, Mr. Justice Blackstone, holds that this recognition was justly obtained of King John, sword in hand. And peradventure it must be one day, sword in hand, again rescued and preserved from total destruction and oblivion.
Related Topics: John Locke, Freedom of Religion, Rights

The introductory paragraph uses material from the Wikipedia article "Magna Carta" as of 21 Sep 2018, which is released under the Creative Commons Attribution-Share-Alike License 3.0.