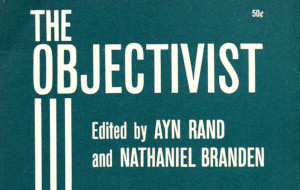 Objectivist: 1962-1976
by Robert Hessen, The Conservative Press in Twentieth-Century America, 1999

Ayn Rand created the Objectivist Newsletter, the first of her three periodicals, in 1962. In the inaugural issue, she began by denouncing conservatism ... It only would make sense to classify her as a conservative if the term is used loosely to signify opposition to twentieth-century statism. ... Based on the explosive growth of interest in Objectivism, Rand and Branden decided to launch a journal of ideas devoted to applying her philosophy to the problems and issues of contemporary American culture.

Ayn Rand (1905–1982), by Cato Institute, Mar 2003
One of the "Three Women Who Launched a Movement" articles, celebrating during Women's History Month the 60th anniversary of the publication of The Fountainhead (as well as Rose Wilder Lane and Isabel Paterson books published in the same year)

For the next ten years, [Rand] promoted her philosophy through her nonfiction writings—including The Virtue of Selfishness, Capitalism: The Unknown Ideal, and For the New Intellectual—her newsletter, The Objectivist, her column for the Los Angeles Times, and the Nathaniel Branden Institute ... until ... 1968. Rand would continue to publish The Objectivist, later renamed The Ayn Rand Letter, and lecture on college campuses.
Related Topics: Capitalism, Roy Childs, Communism, Libertarianism, Objectivism, Ayn Rand, Rush

The introductory paragraph uses material from the Wikipedia article "Objectivist periodicals" as of 5 Dec 2017, which is released under the Creative Commons Attribution-Share-Alike License 3.0.