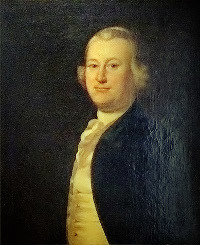 James Otis Jr. (5 February 1725 – 23 May 1783) was a lawyer in colonial Massachusetts, a member of the Massachusetts provincial assembly, and an early advocate of the Patriot views against British policy that led to the American Revolution. His catchphrase "Taxation without representation is tyranny" became the basic Patriot position.

James Otis - Online Library of Liberty
Includes portrait, short biography and links to various of Otis's works and link to a selected quotation

James Otis (1725–83) was a lawyer in Massachusetts and a member of the Massachusetts Legislature. In the mid-1760s he wrote a number of important pamphlets in favor of American independence and is said to have coined the revolutionary phrase 'no taxation without representation'. He resigned his position as advocate general of the Vice Admiralty Court to protest the issuance of writs of assistance by the Massachusetts superior court and was an early supporter of the Stamp Act Congress. He is supposed to have suffered a blow to the head by a customs official in 1769 which led to his going insane.

American Political Writing, 1760-1789, by William MacDonald, The Cambridge History of American Literature, 1917
Book I, Chapter VIII, Section 2; two paragraphs, describing Otis' involvement in opposing the reissuance of writs of assistance and his acts and writings while on the provincial House of Representatives

James Otis the younger, for ten years past one of the leaders of the Massachusetts bar, and lately advocate-general, who, unable to support the application for the writs, had resigned his office, made the leading argument for the petitioners. ... Elected a member of the House of Representatives, he presently led an attack upon Governor Bernard for fitting out an armed vessel without the approval of the House ... late in 1762 published his first political pamphlet, A Vindication of the Conduct of the House of Representatives of the Province of the Massachusetts-Bay ...
The Bill of Rights: Searches and Seizures, by Jacob Hornberger, Future of Freedom, Oct 2004
Discusses general warrants (and the British case of Entick v Carrington) and writs of assistance in colonial America as precedents for the framing of the Fourth Amendment and the latter's imporance in the present

One of the most famous and eloquent denunciations of writs of assistance was issued by colonist James Otis, who wrote in 1761, "It appears to me the worst instrument of arbitrary power, the most destructive of English liberty and the fundamental principles of law, that ever was found in an English law-book ... Every one with this writ may be a tyrant; if this commission be legal, a tyrant in a legal manner, also, may control, imprison, or murder any one within the realm ... a person with this writ, in the daytime, may enter all houses, shops, etc., at will, and command all to assist him ..."
Related Topics: American Revolutionary War, United States Constitution, Iraq War, Right Against Unreasonable Searches and Seizures
James Otis - Hero of the Day, The Daily Objectivist, 2000
Introduction to and excerpt of a speech given in February 1761 before the Superior Court, Province of Massachusetts Bay, challenging writs of assistance on behalf of a group of Boston merchants

James Otis (1725-1783) was an early champion of the rights of the American colonials against the occupying force of Great Britain, some of whose activities resembled those of today's DEA or BATF or INS. Both his deeds and his argumentation helped lay the groundwork for the more spectacular Revolutionary events of the late 1760s and 1770s that we remember a little better. 'Writs of assistance' were general warrants that assisted the British in searching for smuggled goods anywhere and everywhere—no specific warrant necessary. (The colonials were nothing if not smugglers.)
Related Topic: Right Against Unreasonable Searches and Seizures
John Adams, by John Fiske, The Presidents of the United States, 1789-1914, 1914
Biographical sketch; includes picture of Adams (painting by Gilbert Stuart), photograph of houses where he was born; facsimile of a letter with his signature, and a section on his wife Abigail

When James Otis in 1761 delivered his memorable argument against writs of assistance, John Adams was present in the court-room, and the fiery eloquence of Otis wrought a wonderful effect upon him. As his son afterward said, 'it was like the oath of Hamilcar administered to Hannibal.' In his old age John Adams wrote, with reference to this scene, 'Every man of an immense crowded audience appeared to me to go away, as I did, ready to take arms against writs of assistance. Then and there was the first scene of the first act of opposition to the arbitrary claims of Great Britain. Then and there the child Independence was born.'
Related Topics: John Adams, United States Declaration of Independence, John Jay, Thomas Jefferson, Freedom of Speech, George Washington

The introductory paragraph uses material from the Wikipedia article "James Otis Jr." as of 9 Apr 2018, which is released under the Creative Commons Attribution-Share-Alike License 3.0.