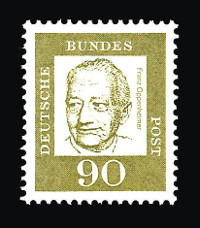 Franz Oppenheimer (30 March 1864 – 30 September 1943) was a German sociologist and political economist, who published also in the area of the fundamental sociology of the state.

Franz Oppenheimer, a German sociologist, practiced as a physician in Berlin for many years, after which he took up the study of economics while supporting himself by writing articles ... Oppenheimer was influential in shaping modern libertarian thought through his book Der Staat (The State, 1914) ... This treatise offers a detailed description of the origins of the state, which Oppenheimer claimed began in conquest. According to Oppenheimer, "the State grew from the subjection of one group of men by another. Its basic justification, its raison d’être, was and is the economic exploitation of those subjugated."
Related Topics: Albert Jay Nock, Society, The State

Franz Oppenheimer :: Liberaler Sozialismus
Mostly in German, but several items in English, Spanish, French and other languages; includes bibliography, articles and books by and about Oppenheimer, in original and translation, short biographies and photographs

Franz Oppenheimer Bibliographie, by Werner Kruck, 13 Mar 2006
In German, includes over 50 monographs and more than 300 essays; based on Felicia Fuss' "A Bibliography of Franz Oppenheimer", American Journal of Economics and Sociology, 1946-1947; additional input from the author and from Franz Ritzmann

Nock absorbed the ideas of German sociologist Franz Oppenheimer, whose radical book Der Staat was published in 1908. An English translation, The State, appeared in 1915. Oppenheimer had noted that there were only two fundamental ways of acquiring wealth—work and robbery. He declared that government was based on robbery ... [B]etween 1931 and 1933 [Nock] delivered a series of lectures which focused on the struggle for liberty. He subsequently massaged the lecture texts into his great radical polemic Our Enemy, the State. He drew from ideas of Franz Oppenheimer, who had written about the violent origins of the state.
Related Topics: Frank Chodorov, Economic Freedom, Compulsory Education, The Freeman, The Freeman, Henry George, Germany, Thomas Jefferson, Learning, H. L. Mencken, Albert Jay Nock, Franklin D. Roosevelt, The State, Woodrow Wilson, World War I
The Anatomy of the State, by Murray N. Rothbard, Rampart Journal of Individualist Thought, Jun 1965
Examines several attributes of the State, including how it maintains and grows itself and how it deals with other States

The great German sociologist Franz Oppenheimer pointed out that there are two mutually exclusive ways of acquiring wealth; one, the above way of production and exchange, he called the "economic means." The other way is simpler in that it does not require productivity; it is the way of seizure of another's goods or services by the use of force and violence. This is the method of one-sided confiscation, of theft of the property of others. This is the method which Oppenheimer termed "the political means" to wealth ... The State, in the words of Oppenheimer, is the "organization of the political means" ...
Related Topics: United States Bill of Rights, United States Constitution, H. L. Mencken, Albert Jay Nock, Property, The State, War
The Case for the Barbarous Relic, by Lew Rockwell, Mises Daily, 21 Mar 2006
Argues for a return to the gold standard by reviewing U.S. political, economic and monetary history

Never has Franz Oppenheimer's view of the state been more clearly on display: it is there to dominate, exploit, and protect itself against any challenges to its power. It clings to power like Gollum holding the ring. And that power is deployed, not for the ostensible purpose of protecting people but for protecting the state and its interests. When Oppenheimer theorized in 1908 that this was the true nature of the state, he was shouted down and pilloried for denying the doctrine of government as a social compact. Today his claims read like a description of the day's political news.
Related Topics: George W. Bush, Federal Reserve System, Gold Standard, Government, Warren G. Harding, Inflation, Thomas Jefferson, Ludwig von Mises, Money, Murray N. Rothbard, Socialism
An Empire Built of Paper, by Lew Rockwell, The American Conservative, 27 Mar 2006
A review of Empire of Debt: The Rise of an Epic Financial Crisis (2006) by William Bonner and Addison Wiggin

Never has sociologist Franz Oppenheimer's view of the state been more clearly on display: it is there to dominate, exploit, and protect itself against any challenges to its power. It clings to power like Gollum holding the ring. And that power is deployed not for the purpose of protecting people but for protecting the state and its interests. When Oppenheimer theorized in 1908 that this was the true nature of the state, he was shouted down and pilloried for denying the doctrine of government as a social compact. Now his claims read like a description of the day’s political news.
Related Topics: George W. Bush, Federal Reserve System, John T. Flynn, Warren G. Harding, Imperialism, Money, Woodrow Wilson
Frédéric Bastiat: Two Hundred Years On, by Joseph R. Stromberg, 2001
Extensive survey of Bastiat's life and writings

One of the few writers who had any thing good to say of Bastiat was Franz Oppenheimer, the German sociologist and state theorist. He wrote that "Bastiat clearly distinguishes between 'production' and 'spoliation' (as John Rae [did] between production and acquisition) and names as the chief forms of spoliation: war, slavery, theocracy, and monopoly." Further, Bastiat "even defines monopoly entirely correctly as my only predecessor known to me: it carries force into competition and thereby falsifies the correct relation between services received and services earned."
Related Topics: Frédéric Bastiat, Economics, Ethics, Free Trade, Occupational Licensing, Property Rights, Murray N. Rothbard, Socialism, Society, The State
Revisiting a Libertarian Classic: Nock's Our Enemy, the State, by Sheldon Richman, Freedom Daily, Mar 2006
Examines some of the major themes of Nock's Our Enemy, the State (1935)

Nock begins by drawing the contrast between what he called social power and state power. Here he reflects the influence of the classical-liberal sociologist Franz Oppenheimer, whose earlier book, The State, distinguished the only two ways to obtain wealth: the economic means and the political means. As Oppenheimer wrote,

There are two fundamentally opposed means whereby man, requiring sustenance, is impelled to obtain the necessary means for satisfying his desires. These are work and robbery, one's own labor [the "economic means"] and the forcible appropriation of the labor of others [the "political means"] ...

Libertarian ideas about human politics go back even to prehistory, to the creation of the state itself. Although theories of the origins of the state are merely implicit in most libertarian writers, the German anthropologist Franz Oppenheimer described its origin in The State as being in blood and conquest, the result of conquerors trying to live off others' efforts through taxation and the provision of "protection." Oppenheimer distinguished between the "political" means of acquiring wealth—taking it—and the "economic" means—production and exchange.
Related Topics: Frédéric Bastiat, United States Declaration of Independence, England, Greece, The Law, Libertarianism, Gustave de Molinari, Herbert Spencer, Lysander Spooner, William Graham Sumner

The introductory paragraph uses material from the Wikipedia article "Franz Oppenheimer" as of 5 Aug 2018, which is released under the Creative Commons Attribution-Share-Alike License 3.0.