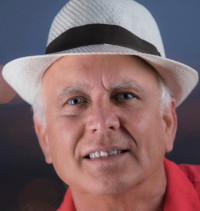 Ken Schoolland is an Associate Professor of Economics at at Hawai‘i Pacific University. He is the author of The Sdventures of Jonathan Gullible: A Free Market Odyssey (1988), which has been published in over 50 languages. He was formerly President and is currently VP for International Relations of Liberty International.

Ken Schoolland - Hero of the Day, The Daily Objectivist, 2000

Ken Schoolland has probably done more to advance the ideas of liberty than any other person in Hawaii. Schoolland, a director for the International Society for Individual Liberty, is the author of The Adventures of Jonathan Gullible: A Free Market Odyssey. It is the satirical tale of a young man—Jonathan—shipwrecked on an island with a government bureaucracy run amok. ... he teaches Economics and Political Science at Hawaii Pacific University. Without imposing his views, his lectures do show the careful listener how government regulation hurts both consumers and producers.

My earliest political memory is of a rally at the Arizona State Fairgrounds where Herbert I Led Three Lives Philbrick was speaking about his life as a double agent for the FBI. His story of espionage in the Cold War was chilling and I could see from my Mom's attitude that this was to be taken seriously ... My most memorable moment came when my dear friend Geo Olsson, introduced [Jonathan Gullible] to Milton Friedman, my single greatest inspiration. In reading through this, I would have to say that the books and films were all great. But the friends and family were by far the greatest influences on my personal libertarian odyssey.
Related Topics: Alaska, Milton Friedman, Hawaii, Libertarianism, Liberty International, Ayn Rand