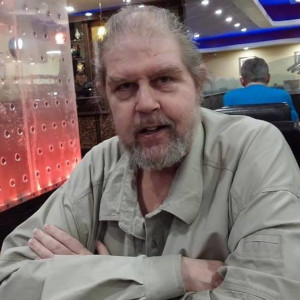 The World According to J. Neil Schulman
Personal website, section of pulpless.com (Schulman's publishing company); includes links to his books, movies, blog and other related sites

About J. Neil Schulman
Lengthy autobiographical page, including information about his books, movies, and related media

J. NEIL SCHULMAN is a novelist, journalist, screenwriter, filmmaker, publisher, radio personality, composer, actor, and unemployed prophet. He's the author of twenty-one books (including break-outs, audiobooks, and a graphic novel) and including two award-winning novels, Alongside Night and The Rainbow Cadenza, short fiction, nonfiction, and screenwritings ... He adapted and directed Alongside Night as a 2014 feature film ... The novel's movie edition of his classic Prometheus-Hall-of-Fame novel — lauded by Anthony Burgess, Milton Friedman, and Ron Paul — has been joined by a graphic novel ...
Advocates for Self-Government - Libertarian Education: J. Neil Schulman - Libertarian
Includes picture, biographical summary and quote

J. Neil Schulman is the author of two award-winning science fiction novels, as well as libertarian non-fiction, short fiction, and screenplays. His 1979 novel Alongside Night was praised by the likes of Anthony Burgess, Milton Friedman, Poul Anderson, and Dr. Thomas Szasz (who said it "ought to be ... the Atlas Shrugged of the '80's") and in 1989 was entered into the Prometheus Society Hall of Fame for outstanding science fiction. His 1984 novel The Rainbow Cadenza won the Prometheus Award for that year, and was praised by science fiction giant Robert Heinlein, Nathaniel Brandon, and Colin Wilson.
Related Topic: Right to Keep and Bear Arms

Robert A. Heinlein's Soaring Spirit of Liberty, by Jim Powell, The Freeman, Jul 1997
Biographical essay, including multiple quotes from fellow authors and significant excerpts from Heinlein's novels and stories

Author J. Neil Schulman spoke for many when he confided that "If Robert Heinlein hadn't written the books he wrote, and I hadn't read them, I doubt very much that I would have had the intellectual background necessary to climb out of the hole I was in between the ages of fifteen and eighteen. He wrote about futures that were worth living for. He wrote about talented people who felt life was worth living and made it worth living, no matter what the breaks that fell their way. His characters never had an easy time of it, but they persevered."
Related Topics: Achievement, Anarchism, Right to Keep and Bear Arms, Entrepreneurship, Robert A. Heinlein, Libertarianism, Liberty, Money, The Moon is a Harsh Mistress, No Free Lunch, Science Fiction, Socialism, Taxation

Dubya and Dubai, Rational Review, 22 Feb 2006
Commentary on the Dubai Ports World deal and related maneuvers by the Bush administration

Here's what I think is going on with the Dubai Ports World deal to operate five American ports. United States Secretary of State Condoleezza Rice is in the Middle East right now ... I am extremely unhappy with President Bush and his major cabinet secretaries for their ham-handedness, their "father knows best" arrogance toward the American people, and their unwillingness to admit that there are serious risks to our national security no matter how carefully they think our bureaucracies at the State Department, the Commerce Department, the Homeland Security Department and the CIA have vetted this deal.
Related Topics: George W. Bush, Dubai, United Arab Emirates
Why this libertarian is voting to re-elect George W. Bush, 21 Oct 2004
Explains Schulman's rationale for casting a vote for Bush in the 2004 presidential election

I've called myself a libertarian since January 10, 1971, when my mother, a diehard New York Sunday Times crossword-doer, said to me, "Hey your favorite author's picture is in the Times Magazine." I rushed over and sure enough there was Robert A. Heinlein's picture illustrating an article entitled "The New Right Credo—Libertarianism" ... Bush is not the best of all libertarian candidates in some theoretical contest where actually having to be president doesn't count, but compared to John F. Kerry, George W. Bush is without question the more libertarian of the two presidents we will end up with.
Related Topics: Michael Badnarik, George W. Bush, Robert A. Heinlein, Libertarian Party, Voting

The introductory paragraph uses material from the Wikipedia article "J. Neil Schulman" as of 17 Mar 2020, which is released under the Creative Commons Attribution-Share-Alike License 3.0.