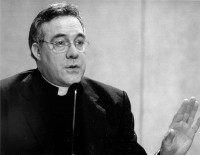 Rev. Robert A. Sirico received his Master of Divinity degree from the Catholic University of America following undergraduate study at the University of Southern California and the University of London. During his studies and early ministry, he experienced a growing concern over the lack of training religious studies students receive in fundamental economic principles, leaving them poorly equipped to understand and address today's social problems. As a result of these concerns, Fr. Sirico co-founded the Acton Institute with Kris Alan Mauren in 1990.

Father Robert Sirico: Power Broker on the Rise, by Bill Berkowitz, AlterNet, 3 Jul 2001
Discusses the Acton Institute, pointing out its major donors, and Sirico's involvement in various activities such as welfare reform, the environment and globalization, and his association with conservative groups

Who is Father Robert Sirico and why are so many conservatives saying such nice things about him? During the last 18 months, Father Sirico advised President George W. Bush on "charitable choice" and the future of welfare reform; responded to a call from the Vatican and edited a book delineating the Catholic Church's teachings on social justice issues; launched a right-wing religious environmental coalition; sponsored a conference on globalization at the Vatican ... Father Sirico has a colorful though rarely publicized background ... After embracing libertarianism, he turned to the Catholic Church.
Related Topic: Acton Institute

Morality and Social Security, Future of Freedom, Dec 1999
Discusses the effect of the U.S. Social Security program from an ethical and social standpoint

It is widely acknowledged by people of all economic and political persuasions that something will have to be to be done about Social Security in the coming years. Some want to shore up the system through higher taxes and other reforms. Others want to convert it to a private-oriented pension system ... Nowhere is this more true than in the area of Social Security. Having a clearer understanding of the social, economic, and cultural costs of the program will take us a long way toward imagining a clearer path for the future, one that is more compatible with our moral ideals of family, community, and self reliance.
Related Topics: Government, Social Security Tax
Religion and Freedom, Future of Freedom, Dec 1993
Examines the premise that the state is justified as a means to promote or even coerce morality, the role of attaining liberty and the historical roots of "church and state"

It never ceases to amaze me to discover the number of people who see a blatant contradiction between the notions of religion and those of liberty ... The late F.A. Hayek... warned ... that the failure of religion to come to grips with the moral foundations of the liberal ... society would imperil civilization ... the Christian attitude toward temporal authority was formed in the crucible of persecution, which makes it all the more remarkable that it emerged with such balance and nuance (racks not usually being the place of considered repose for dispassionate reflection), and continues as such to the present day.
Related Topics: Ethics, Liberty, Freedom of Religion, Rights
A Tribute to Edmund A. Opitz, The Freeman, Oct 1993
Remarks made at the dinner in honor of Opitz' retirement from the Foundation for Economic Education, on 13 Dec 1992

It is customary on occasions such as this to begin by stating what an honor it is to have been asked to speak, and the challenge with which I find myself confronted is how to express to you my deep sense of privilege without it sounding in any way perfunctory. ... I am, in a sense, an heir to his legacy, and it is with an overwhelming sense of gratitude to Almighty God that I am aware of being merely one of Ed's intellectual descendants, though luckier than the others, because it is I who have the honor of giving voice to what I feel sure each of them would say. Ed, in my person, your children rise up to call you blessed.
Related Topics: Ludwig von Mises, Edmund A. Opitz, Freedom of Religion, Socialism

The introductory paragraph uses material from the Wikipedia article "Robert Sirico" as of 6 Jun 2018, which is released under the Creative Commons Attribution-Share-Alike License 3.0.