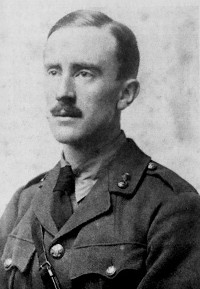 John Ronald Reuel Tolkien, CBE FRSL (3 January 1892 – 2 September 1973) was an English writer, poet, philologist and university professor who is best known as the author of the classic high fantasy works The Hobbit, The Lord of the Rings and The Silmarillion.

Freedom vs. Liberty, by Joseph R. Stromberg, 10 Jul 2001
Delves into the etymology and semantics of the English words "freedom" and "liberty"

If we wish to speak of the ruler, we have a choice of "regal" (Latin), "royal" (French [from] Latin), "imperial" (Latin), or "kingly" (Old English). Owing partly to the efforts of pro-Saxon 19th-century English writers, we now have resort to the English core vocabulary ("native" or Anglo-Saxon) when we write in elevated style. Tolkien's works, for example, show a much lower presence of French/Latin words than would be met with elsewhere.
Related Topics: Ama-gi, Liberty, Society

The introductory paragraph uses material from the Wikipedia article "J. R. R. Tolkien" as of 22 Jun 2018, which is released under the Creative Commons Attribution-Share-Alike License 3.0.