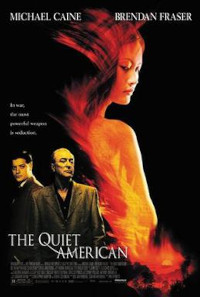 The Quiet American is a 2002 film adaptation of Graham Greene's bestselling novel The Quiet American. It was directed by Phillip Noyce and starred Michael Caine, Brendan Fraser and Do Thi Hai Yen. The 2002 version of The Quiet American, in contrast to the earlier 1958 film version, depicted Greene's original ending and treatment of the principal American character, Pyle. Like the novel, the film illustrates Pyle's moral culpability in arranging terrorist actions aimed at the French colonial government and the Viet Minh. Going beyond Greene's original work, the film used a montage ending with superimposed images of American soldiers from the intervening decades of the Vietnam War.

An older British reporter vies with a young U.S. doctor for the affections of a beautiful Vietnamese woman.

** The Quiet American [2002 version] – the adaptation of Graham Greene’s novel deals with the behind-the-scenes manipulations that led to America’s involvement in the Vietnam war. Don’t waste your time with the 1958 version, which treats Greene’s novel as a murder mystery, not a political intrigue.
Related Topics: All Quiet on the Western Front, The Americanization of Emily, Dr. Strangelove, Gallipoli, The Mouse that Roared, Paths of Glory, Shenandoah, Wag the Dog, War Films

After several decades, Graham Greene's novel about the early days (1952) of American involvement in Vietnam is finally given a proper film adaptation. ... we might wonder if it is 'American' to intervene militarily across the globe and sponsor terrorist attacks on civilians in the name of a greater good. This film, telling a story still relevant 50 years after the novel was published, demonstrates that we are still wondering.

The introductory paragraph uses material from the Wikipedia article "The Quiet American (2002 film)" as of 9 Jun 2018, which is released under the Creative Commons Attribution-Share-Alike License 3.0.