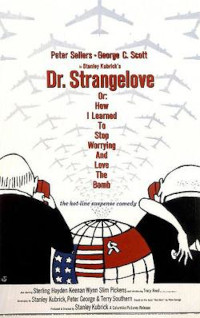 Dr. Strangelove or: How I Learned to Stop Worrying and Love the Bomb, more commonly known as Dr. Strangelove, is a 1964 political satire black comedy film that satirizes the Cold War fears of a nuclear conflict between the Soviet Union and the United States. The film was directed, produced and co-written by Stanley Kubrick, stars Peter Sellers and George C. Scott, and features Sterling Hayden, Keenan Wynn and Slim Pickens. Production took place in the United Kingdom. The film is loosely based on Peter George's thriller novel Red Alert (1958).

Dr. Strangelove or: How I Learned to Stop Worrying and Love the Bomb (1964) - IMDb

** Dr. Strangelove – another Peter Sellers offering that involves an Air Force general who decides to start a war with the Soviet Union. As with The Mouse That Roared, Sellers plays a number of roles. A film that ages well with time.
Related Topics: All Quiet on the Western Front, The Americanization of Emily, Gallipoli, The Mouse that Roared, Paths of Glory, The Quiet American, Shenandoah, Wag the Dog, War Films
Memorializing the Horrors of War with 10 Must-See War Films, by John W. Whitehead, 27 May 2016
Comments on the events of Hiroshima and Nagasaki and on more recent wars, then suggests ten films that focus on "the nasty business of war"; ends by contrasting Obama's and Martin Luther King's Nobel Peace Prize speeches

One of the great films of all time, Stanley Kubrick's Dr. Strangelove burst onto the cinematic landscape and cast a cynical eye on the entire business of war. Strange and surreal, this film is packed full of amazing images and great performances. Peter Sellers should have walked off with the Oscar for best actor (but he didn't). Sterling Hayden and George C. Scott are excellent in support.
Related Topics: Military Industrial Complex, Paths of Glory, The Third Man, War, War Films

Dr. Strangelove or How I Stopped Worrying and Learned to Love the Bomb (1964), by Stephen W. Carson

Stanley Kubrick brilliantly realized that a subject as appalling and unimaginable as global thermonuclear war needed to be dealt with in the form of satire. ... In the guise of a comedy, this film is a powerful meditation on the nonchalance with which our 'leaders' are ready to sacrifice millions of lives in their games of global power politics.

The introductory paragraph uses material from the Wikipedia article "Dr. Strangelove" as of 9 Oct 2018, which is released under the Creative Commons Attribution-Share-Alike License 3.0.