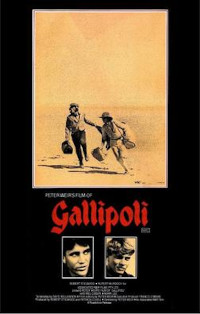 Gallipoli is a 1981 Australian war drama film directed by Peter Weir and produced by Patricia Lovell and Robert Stigwood, starring Mel Gibson and Mark Lee, about several rural Western Australian young men who enlist in the Australian Army during the First World War. They are sent to the peninsula of Gallipoli in the Ottoman Empire (in modern-day Turkey), where they take part in the Gallipoli Campaign. During the course of the movie, the young men slowly lose their innocence about the purpose of war. The climax of the movie occurs on the Anzac battlefield at Gallipoli and depicts the futile attack at the Battle of the Nek on 7 August 1915. It modifies events for dramatic purposes and contains a number of significant historical inaccuracies.

** Gallipoli – a film by one of my favorite directors, Peter Weir. It takes place in World War I, and does a moving job of showing the disillusionment of young men caught up in the ersatz 'glory' of war.
Related Topics: All Quiet on the Western Front, The Americanization of Emily, Dr. Strangelove, The Mouse that Roared, Paths of Glory, The Quiet American, Shenandoah, Wag the Dog, War Films

Hundreds of thousands of young men really were sent into near suicidal trench warfare attacks in World War I—no wonder that more than half of the troops mobilized during the war by the various combatants were either killed or wounded. Artistically, this is generally regarded as a great film, and so it is. ... Recommend this one to the young military enthusiast.

The introductory paragraph uses material from the Wikipedia article "Gallipoli (1981 film)" as of 17 Oct 2018, which is released under the Creative Commons Attribution-Share-Alike License 3.0.