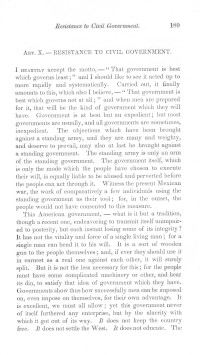 "Resistance to Civil Government" is an essay by Henry David Thoreau. It was first published in Æsthetic Papers (1849) and was based on an earlier lecture given at the Concord Lyceum. The essay was republished in 1866, after Thoreau's death, in the anthology A Yankee in Canada, with Anti-Slavery and Reform Papers, where it was titled "Civil Disobedience", which is now the more commonly known title.

Henry David Thoreau and "Civil Disobedience," Part 1, by Wendy McElroy, Freedom Daily, Mar 2005
After some background and biographical material, describes the event (Thoreau's imprisonment) that led to writing "Civil Disobedience" and Thoreau's reaction to those who paid the tax on his behalf, his jailers, his neighbors and Ralph Waldo Emerson

"Civil Disobedience" ... was first rendered as a lecture at the Concord Meeting Hall. In 1849, it was published under the title "Resistance to Civil Government" in the ... Boston Aesthetic Papers ... After Thoreau's death, his sister Sophia prepared his uncollected works for posthumous publication ... The political essays ... appeared [in] "A Yankee in Canada with Anti-Slavery and Reform Papers" (1866). It included "Civil Disobedience" ... In 1890, Henry Salt published a collection of Thoreau's political essays, including "Civil Disobedience." The book profoundly influenced a young lawyer in South Africa ... Mohandas K. Gandhi.
Related Topics: Law, Nonviolent resistance, Personal Responsibility, The State, Henry David Thoreau, Voting
"If 1,000 Men Were Not to Pay Their Tax Bills This Year…", by Carl Watner, Reason, Sep 1983
Discusses the 1846 incident that led Thoreau to spend a night in jail for refusing to pay a poll tax and the influence of his friends Bronson Alcott and Charles Lane as well as those Thoreau influenced later

... since Thoreau did not promptly pay up, Staples hauled him off to jail ... Three and a half years before, on January 17, 1843, Staples had arrested Thoreau's friend, Bronson Alcott, on a similar charge. ... Based on his experience in jail and the examples of Alcott and Lane, Thoreau presented a lecture to the Concord lyceum in 1848 titled 'The Relation of the Individual to the State.' This was the basis of an article published in 1849 that later became known as his essay 'Civil Disobedience.' Thoreau's main point was that men and women should obey the higher law of their own consciences when it clashed with legislated law.
Related Topics: Nonviolent resistance, Taxation, Henry David Thoreau
Thoreau, Henry David (1817-1862), by Jeff Riggenbach, The Encyclopedia of Libertarianism, 15 Aug 2008
Biographical essay

Thoreau was the author of perhaps the most radical and influential essay in the history of American political philosophy, "Civil Disobedience." This series of reflections on a night Thoreau spent in the Concord, Massachusetts, jail for tax resistance proclaimed "that government is best which governs not at all" and urged its readers to "withdraw their support, both in person and property" from governments that make and enforce unjust laws. The essay had a profound impact on two of the 20th century's greatest political activists—Mohandas K. Gandhi and Martin Luther King, Jr.
Related Topics: Henry David Thoreau, Government