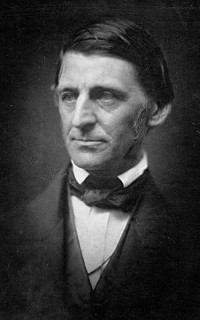 Ralph Waldo Emerson (25 May 1803 – 27 April 1882) was an American essayist, lecturer, philosopher and poet who led the transcendentalist movement of the mid-19th century. He was seen as a champion of individualism and a prescient critic of the countervailing pressures of society, and he disseminated his thoughts through dozens of published essays and more than 1,500 public lectures across the United States.

Ralph Waldo Emerson, a Massachusetts native, was one of the founders of Transcendentalism, a philosophical, literary, and cultural movement that stressed spiritual oneness with nature, reliance on inner experience, and rejection of social conformity ... Emerson insisted that a human life should be guided more by inner development than by traditions, institutions, or social expectations ... Emerson long opposed slavery, the mistreatment of American Indians, and the denial of the suffrage to women, yet he disliked political involvement and felt that social reform must begin with the reform of the individual.
Related Topics: American War Between the States, Government

Emerson had moved to Concord from Boston in 1834, when Thoreau was at Harvard. Virtually from the moment they first met in 1837, Emerson took a strong interest in the younger man, encouraging his writing, helping to arrange opportunities for publication, generally serving as a teacher and mentor ... Yet where had Thoreau picked up such radical ideas in the first place? Wasn't it, at least in part, from Emerson himself? It was Emerson, after all, who wrote in 1833, when Thoreau was a teenage student at Harvard, that "a man contains all that is needful to his government within himself."
Related Topics: Anarchism, Government, Massachusetts, Henry David Thoreau, United States
Henry David Thoreau and "Civil Disobedience," Part 1, by Wendy McElroy, Freedom Daily, Mar 2005
After some background and biographical material, describes the event (Thoreau's imprisonment) that led to writing "Civil Disobedience" and Thoreau's reaction to those who paid the tax on his behalf, his jailers, his neighbors and Ralph Waldo Emerson

In 1834, while Thoreau was a student at Harvard, the leading Transcendentalist moved into a substantial house at the outskirts of Concord, thus converting the village into the heart of this influential movement. That man was Emerson. There has never been rigorous agreement on the definition of Transcendentalism, partly because Emerson refused to be systematic; but there are broad areas of agreement among Transcendentalists ... Despite their differences, Thoreau was deeply influenced by Emerson, whom he met in 1837 through a mutual friend. Four years later, Thoreau moved into the Emerson home ...
Related Topics: Children, Ethics, Law, Life, Resistance to Civil Government, The State, Taxation, Henry David Thoreau
The Life of Benjamin R. Tucker: Disclosed by Himself In the Principality of Monaco At the age of 74, by Benjamin Tucker
Transcribed by Wendy McElroy from Tucker's manuscript; covers mostly the period from his birth to his late teens

Most notable, however, among these New Bedford platform memories was my hearing, not at the Lyceum, but in the Unitarian Chapel, of Ralph Waldo Emerson. He alone among those mentioned was a real world figure, transcending his generation; and, moreover, a specifically Anarchistic force, though, at the moment, my own thought was not sufficiently developed to appreciate this. Later, one of his sayings became one of my watchwords: 'It can never make any difference to a hero what the laws are.'
Related Topics: Atheism, Josiah Warren
Ralph Waldo Emerson - Hero of the Day, The Daily Objectivist, 2000
Includes excerpt from "Self-Reliance"

... Russell Hanneken, tells TDO that critics of Ralph Waldo Emerson (1803-1882) should 'lay off.' 'When I was in high school, "Self-Reliance" gave voice to feelings I didn't know how to express, and got me interested in philosophy,' says Russ. He commends to our attention the following passage from Emerson's essay. 'Whoso would be a man, must be a nonconformist. He who would gather immortal palms must not be hindered by the name of goodness, but must explore if it be goodness. Nothing is at last sacred but the integrity of your own mind. Absolve you to yourself, and you shall have the suffrage of the world. ...'

The introductory paragraph uses material from the Wikipedia article "Ralph Waldo Emerson" as of 4 Aug 2018, which is released under the Creative Commons Attribution-Share-Alike License 3.0.