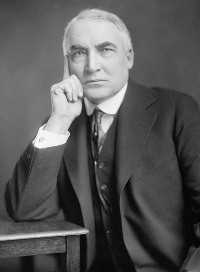 Warren Gamaliel Harding (2 November 1865 – 2 August 1923) was the 29th president of the United States from 4 March 1921, until his death in 1923. At the time of his death, Harding was one of the most popular presidents, but the subsequent exposure of scandals that took place under his administration such as Teapot Dome eroded his popular regard, as did revelations of an affair by Nan Britton, one of his mistresses. In historical rankings of the U.S. Presidents, Harding is often rated among the worst.

Meanwhile, in America, the new president, Warren Harding, solemnly promised in his inaugural speech that the United States would seek 'no part in directing the destinies of the world.' This was a period of isolationism during which immigration was restricted, tariffs were raised, and domestic politics were emphasized.
Related Topics: Israel, Middle East, Woodrow Wilson
The Case for the Barbarous Relic, by Lew Rockwell, Mises Daily, 21 Mar 2006
Argues for a return to the gold standard by reviewing U.S. political, economic and monetary history

Compare the actions of Warren G. Harding with those of Herbert Hoover. In 1921, the United States expe-rienced a major economic downturn ... Unemployment reached 11.7%, even as high as 15%, and output crashed ... There was no shortage of advice given to the Harding administration ... The secretary of commerce, Herbert Hoover, wanted a massive public works program ... In the end, however, before these plans could be implemented, the economy began to rebound. By 1922, unemployment was back down to reasonable levels, output was expanding ... This was laissez faire at work.
Related Topics: George W. Bush, Federal Reserve System, Gold Standard, Government, Inflation, Thomas Jefferson, Ludwig von Mises, Money, Franz Oppenheimer, Murray Rothbard, Socialism
An Empire Built of Paper, by Lew Rockwell, The American Conservative, 27 Mar 2006
A review of Empire of Debt: The Rise of an Epic Financial Crisis (2006) by William Bonner and Addison Wiggin

In the midst of my favorite chapter, "Woodrow Crosses the Rubicon," the authors pause to repudiate the great killer-presidents and to praise instead men like Warren G. Harding. He was pro-peace, and he pardoned the antiwar hero Eugene Debs, who had been jailed and his health destroyed by Wilson for criticizing conscription. Further, they note that there is no Harding Law, no Harding Building in D.C., no war he started, and no government program he launched.
Related Topics: George W. Bush, Federal Reserve System, John T. Flynn, Imperialism, Money, Franz Oppenheimer, Woodrow Wilson
How Much Do You Know About Liberty? (a quiz), The Freeman, Jun 1996
A 20-question quiz (with answers) on various topics related to liberty in the history of the United States

8. When was the last time an American president responded to a depression by cutting government taxes and spending—and what were the results? ... Amidst the deep depression of 1920, President Warren Harding ordered 40 percent spending cuts. This depression was over by July 1921, and the great boom of the 1920s got underway. National income grew from an estimated $59.4 billion to $87.2 billion between 1921 and 1929. Record numbers of Americans bought their own homes. Annual sales of radios soared from about $10 million in 1920 to $411 million in 1929.
Related Topics: United States Bill of Rights, Bureaucracy, Compulsory Education, Entrepreneurship, Farming, Federal Reserve System, Free Trade, Government, Labor, Liberty, Abraham Lincoln, Monopoly, Prohibition, Franklin D. Roosevelt, Taxation, Right to Trial by Jury, War
The Daily Bell - Founding Fathers
Definitions and history of the term "Founding Fathers"

Warren G. Harding, the newspaper publisher and Republican Senator from Ohio, was the first person to use the phrase 'Founding Fathers.' Harding used it in his keynote address to the 1916 Republican Convention and several times after that in speeches before his election. He used it once again in his 1921 inaugural address to the nation when he became President.
Related Topics: Founding Fathers, United States Constitution

The introductory paragraph uses material from the Wikipedia article "Warren G. Harding" as of 30 May 2018, which is released under the Creative Commons Attribution-Share-Alike License 3.0.