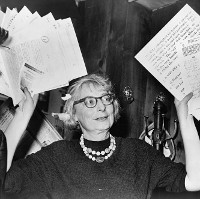 Jane Jacobs OC OOnt (née Butzner; 4 May 1916 – 25 April 2006) was an American-Canadian journalist, author and activist best known for her influence on urban studies, sociology and economics. Her book The Death and Life of Great American Cities (1961) argued that urban renewal did not respect the needs of city-dwellers. It also introduced the sociological concepts "eyes on the street" and "social capital".

Jane Jacobs, a pioneering urbanologist, social theorist, and activist, is best known for The Death and Life of Great American Cities, published in 1961. Her stated objective was to overthrow the rationalistic urban design theories and heavy-handed practices of the day, best illustrated by the 'radiant-city' concept of the architect Le Corbusier and the municipal mega-development policies of the urban planner Robert Moses. To Jacobs, a living city cannot conform to a single rational or aesthetic ideal because it poses a 'problem of organized complexity' that emerges from the free interaction of millions of individuals.
Related Topic: Government

4 May 1916, Jane Butzner, in Scranton, Pennsylvania

There's Jane Jacobs the scholar, whose books (especially The Death and Life of Great American Cities) undermined the ideas of planners who either hated the city or thought they could mold it into a grand monument without regard for how the people who lived in it preferred to live their lives. And then there's Jane Jacobs the activist, who went to the barricades to keep people like Robert Moses from ripping out the heart of the particular cities she lived in. Few others did as much to defend the lives people forged for themselves against the static visions planning elites love to impose.
Related Topics: Norman Borlaug, Milton Friedman, Barry Goldwater, Friedrich Hayek, Robert A. Heinlein, Richard Nixon, Ron Paul, Ayn Rand, Julian Simon, Thomas Szasz, Rose Wilder Lane
Jane Jacobs: The Spontaneity of Cities, by Sheldon Richman, Future of Freedom, Jul 2006
Memorial commentary, in particular about Jacob's books against urban planning and about her activism

She was truly a remarkable woman. With no more than a high-school diploma, but also a keen eye for what other people miss and the ability to turn a phrase, she single-handedly demolished orthodox urban planning in the United States. To the "planner knows best" advocates she responded, People living their everyday lives know better. In other words, The Plan should not be allowed to overrule people's own plans. Jacobs saw and clearly described what The Plan had wrought: segregation of residences from commercial activity, sterile housing projects, dangerous streets, dull communities, lifeless cities.
Related Topic: New York City

The introductory paragraph uses material from the Wikipedia article "Jane Jacobs" as of 11 Jun 2018, which is released under the Creative Commons Attribution-Share-Alike License 3.0.