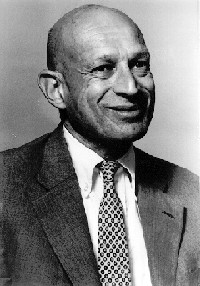 "Julian Simon was one of the most underappreciated economists of the 20th century. ... Although Simon wrote on an unusually wide range of topics—including statistical methods and mental depression—Simon's greatest contribution to economics is his refinement of the idea that humans are 'the ultimate resource.' Simon argued there are no resources without human creativity to figure out how to use them and human effort to actually do so. ... Population researcher Paul Ehrlich found Simon's optimism about population growth to be so absurd that he famously accepted a bet offered by Simon in 1980."
Related Topic: Economic Resources

"Julian Simon (1932-1998) used scientific methods to demonstrate that free people can achieve unlimited material progress. ... As early as 1965, he had done some research showing that population growth had positive effects ... Simon's most important book, The Ultimate Resource, was published in 1981. He cited plenty of historical experience to show that the human mind is the most important resource, because resourceful people keep finding ways to extract natural resources more efficiently, to economize in their use of resources, to find substitutes when things run out, and so on."

"In books such as The Ultimate Resource and The State of Humanity, the late 'Doomslayer' patiently and exhaustively collected the data proving that neo-Malthusians such as Paul Ehrlich and Lester Brown were blowing smoke about environmental degradation and overpopulation. More impressive still: This oracle of optimism suffered from depression much of his adult life."
Related Topics: Norman Borlaug, Milton Friedman, Barry Goldwater, Friedrich Hayek, Robert A. Heinlein, Jane Jacobs, Richard Nixon, Ron Paul, Ayn Rand, Thomas Szasz, Rose Wilder Lane
Barack Obama: The Anti Economic Growth President, by Jim Powell, 29 Feb 2012
Lists and criticizes several of Obama's policies and proposals and discusses why economic growth and progress is beneficial

"Human progress began eons before there were modern welfare states, and it has continued up to the present wherever governments weren't disrupting markets with taxation, regulation, expropriation or war. Economist Julian Simon noted that 'In the nineteenth century, the planet Earth could sustain only one billion people. Ten thousand years ago, only 4 million could keep themselves alive. Now, more than 5 billion people are living longer and more healthily than ever before, on average.'"
Related Topics: Benjamin Franklin, Bernard Mandeville, Barack Obama, Property Rights, Adam Smith, Herbert Spencer, Anne Robert Jacques Turgot
Julian L. Simon - Hero of the Day, by John C. LeGere, The Daily Objectivist, 2000

"When Paul Ehrlich, author of The Population Bomb, argued that humanity was a menace to the ecosystem, ... a demoralized country listened. ... The counter-offensive came from an obscure professor of business economics named Julian Simon ... With cheerful insouciance and a mountain of facts, Simon demonstrated that the ultimate resource is not oil or copper, it is 'people—skilled, spirited, and hopeful people who will exert their wills and imaginations for their own benefit, and so, inevitably, for the benefit of us all,' and that 'the world's problem is not too many people, but lack of political and economic freedom.'"
Julian Simon, combatant in a 200-year war, by Thomas Sowell, 12 Feb 1998
Memorial essay, pointing out that Simon's death occurred near the 200th anniversary of Thomas Malthus' Essay on the Principle of Population

"A professor of economics at the University of Maryland, Julian Simon wrote fact-filled books about population -- all of them exposing the fallacies of those who were promoting 'overpopulation' hysteria. ... With a full understanding of the opposition and smears he would encounter, Julian Simon nevertheless wrote The Economics of Population Growth, Population Matters, and -- his best-known book -- The Ultimate Resource. To him, the ultimate resource was human intelligence. We should also add, in honor of Julian Simon, the courage to use that intelligence."
Related Topic: Economics
Julian Simon, Lifesaver, by Donald J. Boudreaux, The Freeman, Apr 1998
Reflections on the passing of Julian Simon; opening quote: "The real issue is not whether one cares about nature, but whether one cares about people", The Ultimate Resource 2 (1996)

"While pessimism-pushers ... received the mainstream media's reverence, during his life Julian received mostly scorn for showing that the world is not on the brink of an environmental and population calamity. His only consolation was that truth was his constant ally. Julian's foremost contribution to humankind was his demonstration that prosperity and a healthy environment are best assured when governments respect private property and free market—because only within free markets can human creativity flourish. In his magnum opus, The Ultimate Resource 2 ... Julian showed that ours is not a world of fixed resources."
Related Topics: Economic Resources, Free Market, Transportation
Julian Simon Remembered: It's a Wonderful Life, by Stephen Moore, Cato Policy Report, Mar 1998
In memoriam by one of Simon's students, research assistant and co-author of the posthumous It's Getting Better All the Time

"I first met 'doom-slayer' Julian L. Simon at the University of Illinois in the spring of 1980—at just the time when the environmental doomsday industry had reached the height of its influence and everyone knew the earth was headed to hell in a hand basket. ... So for more than 15 years I was privileged to occupy a front-row seat from which I watched as Simon thoroughly and often single-handedly capsized the prevailing Malthusian orthodoxy. He routed nearly every prominent environmental scaremonger of our time: from the Club of Rome, to Paul Ehrlich, to Lester Brown, to Al Gore."
Related Topic: Government
The Doomslayer, by Ed Regis, Wired, Feb 1997
Lengthy essay about Simon, his research and writings, as well as critical views on his positions

"This is the litany: Our resources are running out. The air is bad, the water worse. ... There's just one problem with The Litany ... each and every last claim, is false. ... Thus saith The Doomslayer, one Julian L. Simon, a neither shy nor retiring nor particularly mild-mannered professor of business administration at a middling eastern-seaboard state university. ... These, he says, are the actual and empirical facts ... Simon first got a taste of those facts while studying the data amassed by the economic demographer Simon Kuznets (winner of the 1971 Nobel Prize in economics) and by economist Richard Easterlin, in the mid-1960s."
Related Topics: Business, Economic Resources, Transportation

Natural Resources Aren't Finite, Cato Institute Commentary, 4 Mar 1997
Discusses losses incurred by commodities traders and investment managers who believed that prices of commodities must rise because there is a "finite" stock of natural resources on Earth

"Why did the trading arm of the Japanese firm Sumitomo recently lose more than a billion dollars in its commodities trading operations? Because its copper trader believed that copper prices had to go up eventually. Why did a recent article in The Wall Street Journal report that, 'Despite Risks, Colleges Dabble in Commodities'? Because the investment managers for Harvard and other universities do not understand that the prices of commodities fall over the long term. ... I continue to stand on the ground of non-finiteness, because I have found that leaving this ground causes more bad arguments than standing on it does."
Related Topics: Economic Resources, Technology
On Keynes as a Practical Economist, The Freeman, Aug 1996
Brief discussion of the predictions made by Keynes, in his 1919 book The Economic Consequences of the Peace, about probable shortages of certain natural resources in the United States and Europe after World War I

"John Maynard Keynes's contemporaries thought that he was the cleverest mortal of the century (putting aside such immortals of physical science as Einstein). Bertrand Russell said of Keynes's intellect that it was 'the sharpest and clearest that I have ever known. When I argued with him, I felt that I took my life in my hands, and I seldom emerged without feeling something of a fool.' ... Millions of plain American farmers had a far better grasp of the agricultural reality in the 1920s than did Keynes. So much for Keynes's wisdom as an economist and a seer into the future."
Related Topics: Europe, Friedrich Hayek
The State of Humanity: Good and Getting Better, by Sheldon Richman, Julian Simon, 11 Nov 1996
Contrasts the pessimistic 1980 prediction, made in the Global 2000 Report to the President, about the probable state of the world in the year 2000 with the actual state in the mid-1990's.

"The introduction to The Resourceful Earth (edited by Julian Simon and the late Herman Kahn) revised that passage: 'If present trends continue, the world in 2000 will be less crowded (though more populated), less polluted, more stable ecologically, and less vulnerable to resource-supply disruption than the world we live in now.' ... Our message certainly is not one of complacency. The ultimate resource is people — especially skilled, spirited and hopeful young people endowed with liberty — who will exert their wills and imaginations for their own benefit and inevitably benefit the rest of us as well."
Related Topics: Economic Resources, Life
What About Immigration?, The Freeman, Jan 1986
Examines the economic impact of immigration to the United States, including actual levels of legal and illegal immigration, effect on unemployment, wages, services used, taxes paid and productivity

"Immigration is one of the most important topics of our times. The issue seems to pit ... two fundamental values against each other—lending a helping hand to strangers and ensuring the economic self-interest of family and community. Also involved are values that may not appeal to all but which are in no way irrational, such as the desire to maintain some degree of cultural or racial homogeneity in the country ... What a sad commentary on those societies that people want so much to leave that they are willing to risk their lives. This should remind us how wonderful it is that people want to come here."
Related Topics: Taxation, Unemployment, Wages

A Life Against the Grain: The Autobiography of an Unconventional Economist, 2002
Partial contents: My Mind as a Young Person - In the Fleet - Working in the Advertising Business - Research on Population Economics - The Joy of Studying Immigration - The Airline Oversales Auction System - How did My Economics Get to be What It Is?
Hoodwinking the Nation, 1999
Partial contents: The Concepts That Lead to Scares about Resources and Population Growth - Why Does the Public Not Hear Sound Environmental Thinkers - Damn Lies, Statistics, and Doomsday - Personal Knowledge versus Medis-Shaped Opinions
It's Getting Better All the Time: 100 Greatest Trends of the Last 100 Years
by Stephen Moore, Julian Simon, Cato Institute, 2000
Partial contents: Health - Diets and Nutrition - Wealth - The State of Poor Americans - The State of Children and Teens - The American Worker - Leisure, Recreation, and Entertainment - Housing - Transportation, Innovation, and Scientific Progress
The State of Humanity
by Julian Simon (editor), 1995
58 essays by various authors; contents: Life, Death, and Health - Standard of Living, Productivity, and Poverty - Natural Resources - Agriculture, Food, Land, and Water - Pollution and the Environment - Thinking about the Issues - Conclusion
The Ultimate Resource 2, 1996
Revised edition of 1981 title, 39 essays, contents: Introduction - Toward Our Beautiful Resource Future - Population Growth's Effect Upon Our Resources and Living Standard - Beyond the Data - Conclusion

The introductory paragraph uses material from the Wikipedia article "Julian Simon" as of 17 Jul 2018, which is released under the Creative Commons Attribution-Share-Alike License 3.0.