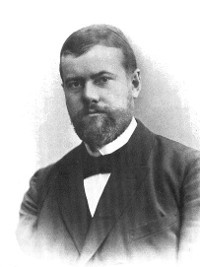 Maximilian Karl Emil "Max" Weber (21 April 1864 – 14 June 1920) was a German sociologist, philosopher, jurist and political economist. His ideas profoundly influenced social theory and social research. Weber is often cited, with Émile Durkheim and Karl Marx, as among the three founders of sociology. Weber was a key proponent of methodological antipositivism, arguing for the study of social action through interpretive (rather than purely empiricist) means, based on understanding the purpose and meaning that individuals attach to their own actions. Unlike Durkheim, he did not believe in monocausality and rather proposed that for any outcome there can be multiple causes.

Max Weber was one of the founding fathers of sociology. In his most famous book, The Protestant Ethic and the Spirit of Capitalism, he claimed that the seeds of capitalism were in the Protestant work ethic. But Weber was also an economist who saw the distinctive feature of advanced capitalism, as in his pre–World War I Germany, in the extensive division of labor and a hierarchical administration that resembled the political bureaucracy. The two features together had created a new middle class whose position depended on neither physical capital nor labor, but on their human capital.

The Authority of a Foreign Talisman: A Study of U.S. Constitutional Practice as Authority in Nineteenth Century Argentina and the Argentine Elite's Leap of Faith, by Jonathan M. Miller, American University Law Review, Jun 1997
Examines the history of Argentine law prior to adoption of the 1853 Constitution, the arguments in Alberdi's Bases and the influence of the U.S. Constitution during the remainder of the 19th century and up to 1930

A century later, Max Weber's sociology of law offers the first attempt to systematize different types of authority. Although Weber analyzes law primarily in the context of what he calls 'rational' grounds of legitimate domination, meaning government that rests 'on a belief in the legality of enacted rules and the right of those elevated to authority under such rules to issue commands,' he also describes two other types of legitimate domination-'traditional' domination and 'charismatic' domination.
Related Topics: Latin America, Argentina, Freedom of Association, United States Constitution, Freedom of the Press, Freedom of Religion
Bourgeois Virtues?, by Deirdre McCloskey, Cato Policy Report, May 2006
Offers an apologia (formal defense) of capitalism, in particular of the phrase "bourgeois virtues" as being neither a contradiction in terms nor a lie

Mueller argues for one direction of causation: 'Virtue is, on balance and all other things being equal, essentially smart business under capitalism: nice guys, in fact, tend to finish first.' Max Weber had a century earlier written to the same effect: 'Along with clarity of vision and ability to act, it is only by virtue [note the word] of very definite and highly developed ethical qualities that it has been possible for [an entrepreneur of this new type] to command the indispensable confidence of his customers and workmen.'
Related Topics: Aristotle, Business, Capitalism, Democracy, Free Market, Liberty
Knight, Frank H. (1885-1972), by Richard Boyd, The Encyclopedia of Libertarianism, 15 Aug 2008
Biographical essay

In attempting to remedy what he saw as the reductionism of neoclassical economics, Knight turned to the writings of German institutional thinkers, particularly Max Weber. Knight's translation of Weber's General Economic History (1927) was the first of Weber's major works to appear in English. ... Knight also was a major influence on the sociologist Edward Shils, who attended Knight's lectures on Max Weber while at Chicago.
Related Topics: Frank Knight, Ethics, Liberty
Political Science, by Sheldon Richman, The Goal Is Freedom, 18 May 2007
Reviews Frank Van Dun's 1986 paper titled "Economics and the Limits of Value-Free Science" and its implications for making an objective case for ethics, freedom and private property

[Van Dun's] target is the influential Max Weber, who held that, in Van Dun's words, "all value judgments are ultimately and irredeemably and necessarily irrational, merely subjective prejudices." But this "value-nihilism" (again, Van Dun's term) proves too much. For "[a]s Weber himself pointed out, it is not even permissible for a scientist to say that the search for knowledge and truth, the life of reason and decision based on knowledge, is objectively good, or that science is a worthwhile vocation — or even that it may be possible one day to discover the truth or validity of these judgments."
Related Topics: Ethics, Libertarianism, Political philosophy, Private Property, Freedom of Speech

The introductory paragraph uses material from the Wikipedia article "Max Weber" as of 25 Apr 2018, which is released under the Creative Commons Attribution-Share-Alike License 3.0.