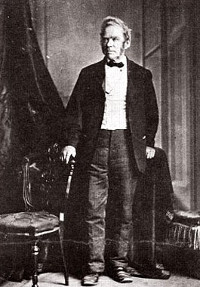 Josiah Warren (1798 – 14 April 1874) was an individualist anarchist, inventor, musician, printer and author in the United States. He is regarded by some as the first American anarchist (though he never used the term himself) and the four-page weekly paper he edited during 1833, The Peaceful Revolutionist, the first anarchist periodical published, an enterprise for which he built his own printing press, cast his own type and made his own printing plates.

In 1872, ... Tucker attended a meeting of the New England Labor Reform League (NELRL) in Boston, where he met the veteran individualists Josiah Warren and William B. Greene. Warren was an anarchist renowned for founding utopian communities that put social theories into practice ... [Tucker's] introductions to Warren and Greene had been facilitated by the individualist Ezra Heywood, who, along with his wife, Angela, published the labor-reform periodical The Word ...
Related Topics: Individualist Anarchism, Capitalism, Liberty, Self-ownership, Benjamin Tucker
Benjamin Tucker, Individualism, & Liberty: Not the Daughter but the Mother of Order, by Wendy McElroy, Literature of Liberty, 1981
Bibliographical essay covering the people and radical movements that influenced Tucker in his founding and publishing of Liberty, its major themes and contributors

Josiah Warren (1798–1874) brought together these two themes, the sovereignty of the individual and the labor theory of value. An early Owenite who advocated economic reform through experimental communities, Warren was an original participant in the New Harmony Community of Equity in Indiana (1826–1827). This experience helped to mold his philosophy. However, he became critical of the community's bureaucracy, fearing it would replace voluntary cooperation and the primacy of the individual with a system of authority. Warren insisted that the individual should remain the primary unit of society.
Related Topics: American War Between the States, Anarchism, Australia, Children, France, William Lloyd Garrison, Henry George, Germany, Government, Auberon Herbert, Labor, Libertarianism, Liberty, Nonviolent resistance, Relationships, Freedom of Religion, Russia, Self-ownership, Spain, Herbert Spencer, Lysander Spooner, Benjamin Tucker
The Life of Benjamin R. Tucker: Disclosed by Himself In the Principality of Monaco At the age of 74, by Benjamin Tucker
Transcribed by Wendy McElroy from Tucker's manuscript; covers mostly the period from his birth to his late teens

... my eyes fell on a simple old man seated two rows in front of me, whose Socratic features wore an expression of shrewdness and good humor. Suddenly Mr. Heywood, indicating this figure with a gesture, referred to the presence in the hall of 'Josiah Warren, notable for his forty years' pilgrimage through the wilderness of American transgressions.' ... a continuance of interest was commanded ... by the literature that I purchased, especially Warren's book, the full title of which was 'True Civilization: A Subject of Vital and Serious Interest to All People; but most immediately to the Men and Women of Labor and Sorrow.'
Related Topics: Atheism, Ralph Waldo Emerson
The Roots of Individualist Feminism in 19th-Century America, by Wendy McElroy
Introduction to Freedom, Feminism, and the State, a collection of 22 essays edited by McElroy

Lucifer, published and edited by Moses Harman, was a free-love paper; free love being the movement which sought to separate the state from sexual matters such as marriage, adultery, divorce, age of consent, and birth control. These issues were to be decided by the individuals involved. The libertarian Josiah Warren, to whom the origins of free love are often traced, expressed its theme: "Everyone is at liberty to dispose of his or her person, and time, and property in any manner in which his or her feelings, or judgment may dictate, without involving the persons or interests of others."
Related Topics: American War Between the States, United States Constitution, William Lloyd Garrison, Kansas, Marriage, Massachusetts, Moral Repression, Republican Party, Self-ownership, Freedom of Speech, Voting

The introductory paragraph uses material from the Wikipedia article "Josiah Warren" as of 26 Jun 2018, which is released under the Creative Commons Attribution-Share-Alike License 3.0.