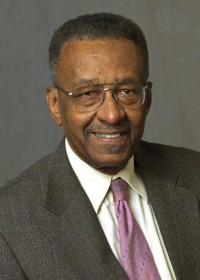 Walter Edward Williams (born 31 March 1936) is an American economist, commentator and academic. He is the John M. Olin Distinguished Professor of Economics at George Mason University, as well as a syndicated columnist and author known for his classical liberal and libertarian conservative views. His writings frequently appear on Townhall.com, WND, Jewish World Review and hundreds of newspapers throughout the United States.

"Walter Wlliams is a nationally syndicated columnist, author, teacher, speaker and social critic. His columns are renowned for their wit, clarity, and hard-hitting anti-statism. He is famous to millions of radio listeners as a popular substitute host on the Rush Limbaugh show."

George Mason University Department of Economics
some dating back to Jan 1996
Jewish World Review
since July 1998
TownHall.com
since Feb 2000
WorldNetDaily
since May 1999

Confessions of a Welfare Queen: How rich bastards like me rip off taxpayers for millions of dollars, by John Stossel, Reason, Mar 2004
Discusses the National Flood Insurance Program, subsidies to farmers and farm corporations (such as Archer Daniels Midland) and Donald Trump's attempt to use eminent domain to expand a casino in Atlantic City

"In an ABC special I made called Freeloaders, economist Walter Williams aptly noted: 'A panhandler is far more moral than corporate welfare queens ... The panhandler doesn't enlist anyone to force you to give him money. He's coming up to you and saying, "Will you help me out?" The farmers, when they want subsidies, they're not asking for a voluntary transaction. They go to a congressman and say, "Could you take his money and give it to us?" That's immoral.'"
Related Topics: Eminent Domain Protections, Farming, Free Market, Government, Institute for Justice
Individual Liberty and Limited Government: Walter E. Williams and The Spirit Of George Mason [PDF], by Michael D. White, 24 May 1993
Introduction to the 1993 Frank M. Engle Lecture, "The Legitimate Role of Government in a Free Economy", delivered by Walter Williams at The American College

"Our 1993 Frank M. Engle Lecturer is Dr. Walter E. Williams, the John M. Olin Distinguished Professor of Economics at George Mason University in Fairfax, Virginia. Dr. Williams is a native of Philadelphia and former faculty member at Temple University. He is the author of numerous scholarly articles and several books, including The State Against Blacks, which was later made into the PBS documentary 'Good Intentions.' He writes a weekly syndicated column and appears frequently on television."
Related Topics: United States Bill of Rights, George Mason
Roasting Walter Williams, by Thomas Sowell, 19 Sep 2003
Recounts how Sowell first met Williams, discovering they thought along similar lines, providing other factual and anecdotal information on Williams since that meeting

"Both these books are written in plain English, by the way, a rarity among the writings of economists. The ability to speak this rare dialect has also helped Walter during his appearances on TV programs and as an occasional fill-in host for Rush Limbaugh. Walter Williams is the only debater to leave Jesse Jackson speechless. On another occasion, he flabbergasted Ted Koppel when a woman on welfare said that she didn't have enough money to take care of all her children and Walter replied: 'Did you ever consider that you might have had too many children for the money?'"
Whoa, Walter!, by Charley Reese, 4 Sep 2006

"Walter Williams ... says, "Today's Americans are vastly different from those of my generation who fought the life-and-death struggle of World War II." Whoa, Walter, that's jive, and you know it. You were born in 1936. You were 9 years old when World War II ended. Your generation didn't fight any struggle. You've spent your adult life in academia."
Related Topic: Middle East
Williams can't duck campaign pushes, by Robert Stacy McCain, The Washington Times, 9 Feb 2007
Discusses the effort by cartoonist Bruce Tinsley, in his "Mallard Fillmore" comic strip, to recruit Williams for the 2008 Republican presidential nomination

"Conservative economist Walter E. Williams says he's flattered at being urged to seek the 2008 Republican presidential nomination — even if the draft committee is headed by a cartoon duck. The 'Mallard Fillmore' comic strip has spent the past two weeks promoting the George Mason University economics professor as a 2008 candidate — with some success, judging from Mr. Williams' e-mail in-box. ... A popular syndicated columnist who often fills in for Rush Limbaugh when the top talk-radio host is on vacation, Mr. Williams said ... he was surprised when Mr. Tinsley began a series of 'Draft Walter Williams' cartoons Jan. 29."
Related Topic: Ron Paul

"... 122 million Americans are outside of the federal income tax system ... if you have no income tax liability, how much do you care about how much Congress spends and the level of taxation? ... every American should get one additional vote for every $10,000 he pays in federal income tax."
Related Topic: Taxation
Economic Lunacy, 15 Nov 2004

"The broken window fallacy was seen in a column written by Princeton University Professor Paul Krugman after the terrorist attack on the World Trade Center ... If [he] is right, wouldn't the terrorists have done us a bigger economic favor if they had destroyed buildings in other cities?"
Related Topic: Broken Window Fallacy
Economic Lunacy, 7 Sep 2005

"Bastiat ... said ... 'the bad economist confines himself to the visible effect; the good economist takes into account both the effect that can be seen and those effects that must be foreseen.' ... economists Chan and Woodward ... can't see ... what those resources would have been used for had there not been hurricane destruction"
Related Topic: Economists
Economics 101, 7 Jun 2000
Related Topic: No Free Lunch
Economics of Prices, 31 May 2006

"Say you owned ... coffee that you purchased for $3 a pound. Each week you'd sell me a pound for $3.25. Suppose ... the world price ... [rises] to $5 a pound. ... I'm betting that you're going to charge me at least $5 a pound. Why? Because that's today's cost to replace your inventory. Historical costs do not determine prices; what economists call opportunity costs do."
Related Topic: Prices
Is there a federal deficit?, 19 Apr 2006
Discusses, from an economics standpoint, whether there is a budget deficit in the U.S. federal government and what are the effects of the shortfall between federal expenditures and revenue (taxes)

"The average taxpayer, depending on the state in which he lives, works from Jan. 1 to May 3 to pay federal, state and local taxes. That means someone else decides how four months' worth of the fruits of the average taxpayer's labor will be spent. The taxpayer is forcibly used to serve the purposes of others – whether it's farm or business handouts, food stamps or other government programs where the earnings of one American are taken and given to another."
Related Topics: Government, Inflation, Taxation
Liberty's Greatest Advocate, 4 Jul 2001
Reflections on certain Bastiat writings on the 200th anniversary of his birth

"Do our elected representatives protect property and punish plunder or do they punish property and protect plunder? It's a mixed story. Two-thirds to three-quarters of next year's $2 trillion federal budget represents legalized plunder ... This legalized plunder isn't limited to money handouts. There's plunder in the form of special privileges such as import tariffs and quotas, licenses and franchises, where government rigs the market in favor of certain sellers, particularly those making large campaign contributions."
Related Topic: Frédéric Bastiat
Minimum wage, Maximum folly, 23 Mar 2005

"The idea that minimum wage legislation is an anti-poverty tool is simply sheer nonsense. Were it an anti-poverty weapon, we might save loads of foreign aid expenditures simply by advising legislators in the world's poorest countries, such as Haiti, Bangladesh and Ethiopia, to legislate higher minimum wages."
Related Topic: Minimum Wage Laws
Minimum Wage, Maximum Folly, 18 May 1999

"The fact of business is that no Congressman or Senator owes his seat to the teenage vote, but many do owe their seats to the union vote and other interests who benefit from higher minimum wages. ... If unions can make part of the labor market less competitive through minimum wages, they can demand higher wages for their members."
Related Topic: Minimum Wage Laws
Orchestrating Energy Disaster, 23 May 2001
Related Topic: Deregulation
There's No Free Lunch, 3 Oct 2001
Related Topic: No Free Lunch

The introductory paragraph uses material from the Wikipedia article "Walter E. Williams" as of 08 Jun 2018, which is released under the Creative Commons Attribution-Share-Alike License 3.0.