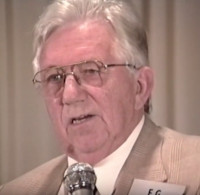 Edwin George West (27 February 1922 – 6 October 2001) was an economist and economic historian at Carleton University interested in the relationship between the state and the education sector. He applied public choice theory to state education and "he had a profound influence on both academic scholarship and education policy in Britain and abroad". The E.G. West Centre at Newcastle University is named in his honor.

Currently, West is professor emeritus at Carleton University, Ottawa, where his areas of expertise are public finance, public choice and the history of economic thought, particularly with respect to the work of Adam Smith. His book, Adam Smith and Modern Economics: From Market Behaviour to Public Choice, was published by Edward Elgar in 1990. ... Professor West, who received his doctorate in economics from London University, will have two special American editions of earlier works published in the near future by the Liberty Fund: Education and the State (1970) and Education and the Industrial Revolution (1975).
Related Topics: Banking, Central Banking, Economic Freedom, Educational Freedom, Hong Kong, India, Japan, John Stuart Mill, Minimum Wage Laws, Russia, Adam Smith, Taxation

The introductory paragraph uses material from the Wikipedia article "E. G. West" as of 3 Apr 2018, which is released under the Creative Commons Attribution-Share-Alike License 3.0.