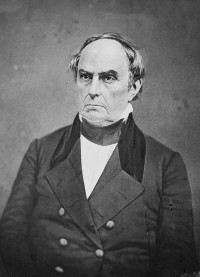 Senate Years of Service: 1827-41; 1845-1850
Party: Adams; Anti-Jacksonian; Whig
...a Representative from New Hampshire and a Representative and a Senator from Massachusetts; born in Salisbury, N.H. ... graduated from Dartmouth College, Hanover, N.H., in 1801 ... moved to Boston, Mass., in 1816; achieved national fame as counsel representing Dartmouth College before the United States Supreme Court in the Dartmouth College case 1816-1819; delegate to the Massachusetts State constitutional convention in 1820 ... appointed Secretary of State by President Millard Fillmore and served from July 22, 1850, until his death ...

Daniel Webster - Online Library of Liberty
Includes portrait, short biography and links to various of Webster's works and to a selected quotation

Daniel Webster was elected to Congress as a Federalist and served in the House of Representatives from 1813 to 1817. He was a prominent opponent of the Republican embargo and the War of 1812 and was elected to the House of Representatives from Boston, serving from 1823 to 1827, and then to the Senate in 1827. He opposed the protective tariff from 1816 to 1824 but voted for the tariff act of 1828. Webster supported Andrew Jackson in the nullification crisis, and opposed him on policy toward the Bank of the United States.

WEBSTER, Daniel (1782-1852) Bibliography
Biographical Directory of the United States Congress; over 80 books, articles and other material about Webster dating from the 1850s to the present

On Conscription [PDF], 9 Dec 1814
Condensed from speech before the U.S. House of Representatives, given in opposition to bill proposing conscription during the War of 1812, reprinted in Left and Right in 1965, during the Vietnam War

This bill indeed is less undisguised in its object, and less direct in its means, than some of the measures proposed. It is an attempt to exercise the power of forcing the free men of this country into the ranks of an army, for the general purposes of war, under color of a military service. It is a distinct system, introduced for new purposes, and not connected with any power, which the Constitution has conferred on Congress. ... With the same earnestness with which I now exhort you to forbear from these measures, I shall exhort them to exercise their unquestionable right of providing for the security of their own liberties.
Related Topics: United States Constitution, Government, Militarism, War

The introductory paragraph uses material from the Wikipedia article "Daniel Webster" as of 14 May 2018, which is released under the Creative Commons Attribution-Share-Alike License 3.0.