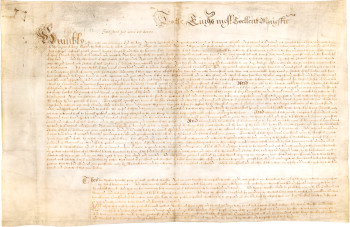 The Petition of Right is a major English constitutional document that sets out specific liberties of the subject that the king is prohibited from infringing. Passed on 7 June 1628, the Petition contains restrictions on non-Parliamentary taxation, forced billeting of soldiers, imprisonment without cause and the use of martial law. Following disputes between Parliament and King Charles I over the execution of the Thirty Years' War, Parliament refused to grant subsidies to support the war effort, leading to Charles gathering "forced loans" without Parliamentary approval and arbitrarily imprisoning those who refused to pay. Moreover, the war footing of the nation led to the forced billeting of soldiers within the homes of private citizens and the declaration of martial law over large swathes of the country.

Civil Liberty and the State: The Writ of Habeas Corpus, by Richard Ebeling, Freedom Daily, Apr 2002
Highlights of English and American history on the writ of habeas corpus, in particular the 17th century conflict between Charles I and Edward Coke

When Charles sent a message that he would respect the principles of the Magna Carta in general, Coke replied,

Did ever Parliament rely on messages?... The King's answer is very gracious; but what is the law of the realm? That is the question.... Let us put up a Petition of Right; not that I distrust the King, but that I cannot take his trust but in a Parliamentary way.

... Finally, the king gave in to a joint statement prepared by the Houses of Commons and Lords insisting that he accede to the two resolutions, and the Petition of Right was passed and read into the Statute Book.
Related Topics: Edward Coke, United States Constitution, England, Writ of Habeas Corpus, Magna Carta, Property
An Independent Judiciary, by Jim Powell, The Triumph of Liberty, 4 Jul 2000
Lengthy biographical essay of Edward Coke; first chapter of section 9, "Protecting Liberty"

[Charles I] continued to make demands, and on May 8 Coke proposed that Parliament adopt a petition of right on "1. The personal liberty of the subject. 2. His propriety in his goods. 3. Unbilletting of soldiers. And 4. Silencing of martial law in time of peace." Charles insisted on his prerogatives, but Coke remained defiant. On June 8, Charles met both Houses of Parliament ... He capitulated and accepted the petition of right as law ... Charles disregarded the Petition of Right and refused to call another Parliament for eleven years. But Coke's principles inspired John Lilburne and other English freedom fighters.
Related Topics: Standing Army, Edward Coke, Founding Fathers, Law, Occupational Licensing, Magna Carta, Protection Against Cruel and Unusual Punishments, Freedom of Religion, Right to Trial by Jury

The introductory paragraph uses material from the Wikipedia article "Petition of Right" as of 26 Nov 2017, which is released under the Creative Commons Attribution-Share-Alike License 3.0.