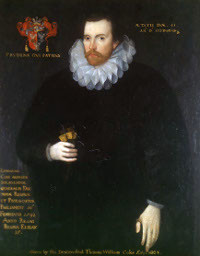 Sir Edward Coke SL (1 February 1552 – 3 September 1634) was an English barrister, judge and politician, who is considered to be the greatest jurist of the Elizabethan and Jacobean eras.

Sir Edward Coke was an English lawyer, judge, and royal advisor. Coke was a prominent Parliamentarian and author and was especially important in the creation of the early modern common law. His ideas about the ancient constitution of England, derived from both history and the common law, concluded that common law was both integral to the evolution of the law’s independence from royal power and served as a limit over administrative and official conduct. These ideas framed the understanding of the law among English colonists in North America as well as strongly influencing the modern ideal of the rule of law.
Related Topics: Law, Rights

Sir Edward Coke was an English lawyer whose defense of the supremacy of the common law against the claims of the royal prerogative had a profound influence on the development of English law and the United States Constitution. ... when Coke, summoned to a disputation on the king's power to withdraw a case from the courts, earned James I's fury by his assertions that the common law was the supreme law and that 'the king in his own person cannot adjudge any case...' In 1610 Coke again crossed the king when ... stating that the king cannot change any part of the common law nor create any offense by proclamation which was not an offense before.

Sir Edward Coke (pronounced cook) (1552-1634) was a lawyer, Member of Parliament, and judge of great renown. He is considered one of the premier champions of the common law, which he defended against the attempted encroachments of the courts of equity and the royal prerogative of the Stuarts—James I (r. 1603-1625) in particular.

Lilburne spent his spare time studying philosophy and law. In 1642, Lilburne obtained a copy of jurist Edward Coke's Institutes. Coke (1552-1634) had championed common law over arbitrary royal edicts. With common law, local judges made decisions case by case, from which general rules evolved. These tended to be applied more predictably than statutes.
Related Topics: Republic of Ireland, Thomas Jefferson, Rule of Law, John Lilburne, John Milton, Freedom of the Press, Right Against Self-Incrimination
The Alleged Liberalism of Sir Edward Coke, by Murray Rothbard, Economic Thought Before Adam Smith, 1995
From the third section, titled "The 'economic liberalism' of Sir Edward Coke" of chapter 10; argues that Coke was not a sympathizer of laissez-faire but rather objected to the king (versus the Parliament) intervening in markets

Coke himself was a moderate Anglican, and not particularly concerned with religious issues. He was also not in any sense a merchant or a spokesman for merchants; he was a country gentleman from Norfolk who successively married two heiresses, and spent most of his career as a government lawyer, successively attorney general and chief justice. ... As an MP, Coke supported many mercantilist measures. ... In general, Sir Edward Coke had no quarrel with government regulation and control of trade, or with the creation of monopolies; what he objected to was the king doing the regulating or monopolizing, rather than Parliament.
Related Topics: Free Trade, Monopoly
Barristers and Barriers: Sir Edward Coke and the Regulation of Trade [PDF], by Gary M. Anderson, Robert D. Tollison, Cato Journal, 1993
Examines Coke's impact on the regulation of the legal profession and argues that while he opposed royal grants of monopoly privileges, his efforts tended to enhance monopoly advantages of common law barristers

Historians since David Hume have honored Sir Edward Coke as a key defender of liberty against royal tyranny. A number of prominent economic historians have described Coke as having played a leading role in the fight against monopoly grants in the early 17th century. ... [Many] argue that Coke was an early advocate of laissez faire ... they maintain that Coke was principally motivated by his philosophical commitments to the dominance of the common law. But, neither Coke nor any of his fellow barristers opposed government economic regulations of the competitive process in principle.
Related Topics: Alternative Dispute Resolution, Law, Monopoly
Civil Liberty and the State: The Writ of Habeas Corpus, by Richard Ebeling, Future of Freedom, Apr 2002
Highlights of English and American history on the writ of habeas corpus, in particular the 17th century conflict between Charles I and Edward Coke

Sir Edward Coke, the great English legal philosopher of the common law, took on a leadership role in the defense of civil liberty ... During the Parliamentary debates ..., Coke spoke out against compulsory lending to the government and said in reference to those who had been arrested and imprisoned for refusing to lend money to the king, "What is this but to declare upon record that any subject committed by such absolute command may be detained in prison forever? What doth this tend to but the utter subversion of the choice, liberty, and right to every freeborn subject in this kingdom?"
Related Topics: United States Constitution, England, Writ of Habeas Corpus, Magna Carta, Petition of Right, Property
The Great Writ Then and Now, by Wendy McElroy, The Freeman, Nov 2009
Chronicles the history of the writ of habeas corpus from the Magna Carta through the American Civil War to Guantanamo Bay and "enemy combatants"

Magna Carta assumed political and legal prominence in the early seventeenth century when it was reinterpreted and used to advantage by the lawyer and parliamentarian Sir Edward Coke. Coke was a passionate advocate of common law over supreme monarchy; he famously proclaimed in Parliament, "Magna Carta is such a fellow that he will have no sovereign." In 1628 he helped to draft the Petition of Right, which became a foundational document of the English Constitution. ... American revolutionaries like Thomas Jefferson and James Madison were intimately familiar with Coke's four-volume Institutes of the Laws of England.
Related Topics: American War Between the States, George W. Bush, United States Constitution, Writ of Habeas Corpus, Jacob Hornberger, Magna Carta, Inalienable Rights, No Quartering of Soldiers
An Independent Judiciary, by Jim Powell, The Triumph of Liberty, 4 Jul 2000
Lengthy biographical essay of Edward Coke; first chapter of section 9, "Protecting Liberty"

Edward Coke was born with law in his blood on February 1, 1552 ... [He] started practicing law in 1578 ... Attorney General Coke emerged as a formidable man when he handled some sensational trials, and he soon challenged the king ... Coke objected to the king's men trying to influence a judge when neither a defendant nor defense counsel were present for cross-examination ... When the House of Lords defended prerogatives claimed by the king, Coke warned that the prerogatives had no basis in English law. Yet the king continued to make demands, and on May 8 Coke proposed that Parliament adopt a petition of right ...
Related Topics: Standing Army, Founding Fathers, Law, Occupational Licensing, Magna Carta, Petition of Right, Protection Against Cruel and Unusual Punishments, Freedom of Religion, Right to Trial by Jury
Natural Law and the American Tradition, by Davis E. Keeler, The Freeman, May 1981
Discusses the influence of Edward Coke and William Blackstone in early colonial America

Lord Coke was a product of the Seventeenth Century, which saw not only the ascendency of the doctrine of natural law as a restriction on the sovereign's relations to his subjects, but in England saw it established that there were certain fundamental common law rights which the courts would enforce even against the king. To Lord Coke, the common law limitations on royal authority became natural limitations on all authority; the common law rights of Englishmen became the natural rights of man. ... Coke seldom rested solely upon the Magna Carta or other authority but would invariably invoke 'common right and reason' to justify his position.
Related Topics: William Blackstone, United States Declaration of Independence

Sir Edward Coke is most remembered for his forceful championship of the supremacy of the common law. He defended the common law against the prerogative power of the crown and the encroachments of ecclesiastical jurisdiction. In 1628 he published the first of four volumes of Institutes, which delineated some of the basic rights of an individual in a stable legal order.
The Lion and the Throne: The Life and Times of Sir Edward Coke (1552-1634)
by Catherine Drinker Bowen, 1957
Contents: Part I: Parliament Man and Attorney General 1552-1606 - Part II: The judgeship 1607-1616 - Part III: The Parliament Man 1617-1634

The introductory paragraph uses material from the Wikipedia article "Edward Coke" as of 12 Jul 2018, which is released under the Creative Commons Attribution-Share-Alike License 3.0.