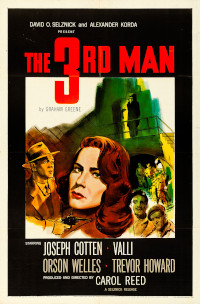 The Third Man is a 1949 British film noir directed by Carol Reed, written by Graham Greene, and starring Joseph Cotten, Alida Valli, Orson Welles and Trevor Howard. The film is set in post–World War II Vienna. It centers on Holly Martins, an American who is given a job in Vienna by his friend Harry Lime, but when Holly arrives in Vienna he gets the news that Lime is dead. Martins then meets with Lime's acquaintances in an attempt to investigate what he considers a suspicious death.

Memorializing the Horrors of War with 10 Must-See War Films, by John W. Whitehead, 27 May 2016
Comments on the events of Hiroshima and Nagasaki and on more recent wars, then suggests ten films that focus on "the nasty business of war"; ends by contrasting Obama's and Martin Luther King's Nobel Peace Prize speeches

Carol Reed's The Third Man, which deals primarily with the after-effects of the ravages of war, is a great film by anyone's standards. Set in postwar Europe, this bleak film (written by Graham Greene) sets forth the proposition that the corruption inherent in humanity means that the ranks of war are never closed. There are many fine performances in this film, including Orson Welles, Joseph Cotten and Alida Valli.
Related Topics: Dr. Strangelove, Military Industrial Complex, Paths of Glory, War, War Films

The libertarian virtue of this film is the unmasking of the State and its wars. Harry Lime, as a heart-rending visit with his victims shows, is evil for the way he uses people and spends lives for his own gain. But he is only doing what the State does on a smaller scale. ... Like the State and its apologists, he sees nobility only in conflict and makes fun of peaceful bourgeois accomplishments ...

The Third Man (1949) - ... If one of those dots stopped moving forever, 1949
The ferris wheel scene, where Harry Lime expounds about governments and the Borgias vs. the Swiss
The Third Man Trailer, 1949

The introductory paragraph uses material from the Wikipedia article "The Third Man" as of 24 Sep 2018, which is released under the Creative Commons Attribution-Share-Alike License 3.0.