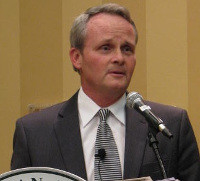 Foundation for Economic Education, President, 2008-2019
Mackinac Center for Public Policy, President, 1988-2008
Students for Liberty, Board of Advisors
Eris Society, 1994, "Michigan Free Market: Is It Real or Is It Sominex?"
Grove City College, Bachelor of Arts (economics), 1975

After serving as President for the Center's first two decades, Lawrence W. (Larry) Reed, became president emeritus of the Mackinac Center for Public Policy, a Midland-based research and educational institute on September 1, 2008 ... Reed assumed the presidency of the Foundation for Economic Education, headquartered in Irvington, New York ... He taught economics at Midland's Northwood University from 1977 to 1984 and chaired the Department of Economics from 1982 to 1984. He designed the university's unique dual major in Economics and Business Management and founded its annual, highly-acclaimed "Freedom Seminar."

Everyone agrees that in the 100 years between 1750 and 1850 there took place in Great Britain profound economic changes. It was the age of the Industrial Revolution, complete with a cascade of technical innovations, a vast increase in industrial production, a renaissance of world trade, and a rapid growth of urban populations ... Robert Hessen took note of this historiographical mischief and urged others to acknowledge the error ... Indeed, Hessen points out, the first Act in Britain that applied to factory children was passed to protect these very parish apprentices, not "free labour" children.
Related Topics: Capitalism, Children, Ludwig von Mises, United Kingdom
Prohibition Hasn't Ended Yet, The Freeman, Jul 2001
Discusses laws in 30 states that forbid purchases of wine from other states unless done through a state-licensed liquor agent

It's been nearly seven decades since the national war against alcohol during Prohibition (1920-33) came to an end with the repeal of the Eighteenth Amendment. But 30 states, including mine (Michigan), still prosecute a kind of mini-Prohibition of their own: They forbid consumers from buying wine from other states unless the products are shipped through a state-licensed liquor authority ... Legislators ... should recognize the futility of this throwback to Prohibition, strike a blow for freedom of choice and competition, and repeal these ridiculous, special-interest-serving and otherwise utterly futile laws.
Related Topics: Commerce Clause, Institute for Justice, Michigan, Prohibition
Seventy Years Since FDR: A Time To Remember John T. Flynn, 10 Mar 2003
Review of John T. Flynn's The Roosevelt Myth on the 70th anniversary of the inauguration of FDR, highlighting the defying attitudes of Henry Ford and Sewell Avery, the president of Montgomery Ward

For every thousand books written, perhaps just one comes to enjoy the appellation, "classic." That label is reserved for a book that through the force of its originality and thoroughness, shifts paradigms and serves as a timeless, indispensable source of insight. ... John T. Flynn's The Roosevelt Myth is as relevant and necessary today as it was a half-century ago. Americans who prefer their history not be twisted to serve statist ends ... should be sure to stock their libraries with this classic. No one who reads it with an open mind will ever think of Franklin Delano Roosevelt the same way again.
Related Topics: John T. Flynn, Franklin D. Roosevelt, World War II
A Tribute to the Polish People, The Freeman, Oct 2009
Larry reminisces about a visit with the Polish underground movement in November 1986

The cause of liberty saw memorable highs and unconscionable lows in 1989. Surely that year will be best remembered as the year Soviet hegemony over central Europe disintegrated, paving the way for the dissolution of the Soviet Union itself in 1991. Free people everywhere should toast the brave people of one nation in particular–Poland–for the pivotal role they played in those momentous events. ... To all those millions of Polish freedom fighters who ushered communism into the dustbin of history twenty years ago, thank you for your courage, your perseverance, your vision, and your example.
Related Topics: Communism, Milton Friedman, Poland, Ronald Reagan

Larry Reed Shares Why He Fights for Liberty & the Future Direction of FEE, by Pete Eyre, The Motorhome Diaries, 22 Jul 2009
Larry discusses how he became involved in the liberty movement, and the history, role and future of FEE

In coming years, I suspect that FEE will reassert its long-standing position as a kind of ideological mothership of the broader freedom movement.
Related Topic: Foundation for Economic Education

The introductory paragraph uses material from the Wikipedia article "Lawrence Reed" as of 18 Dec 2017, which is released under the Creative Commons Attribution-Share-Alike License 3.0.