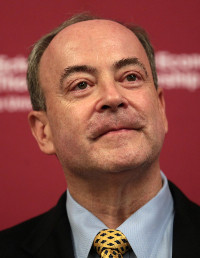 Clint Bolick (born 26 December 1957) is an Associate Justice of the Arizona Supreme Court. Previously, he served as Vice President of Litigation at the Goldwater Institute, where he litigated against governments and government employees on behalf of citizens. He co-founded the Institute for Justice, where he was the Vice President and Director of Litigation from 1991 until 2004. He led two cases that went before the Supreme Court of the United States. He has also defended state-based school choice programs in the Supreme Courts of Wisconsin and Ohio.

A legal pioneer in a number of areas, Bolick is perhaps best known for his leadership in defending state-based school choice programs. He has argued and won significant cases in both state and federal courts, winning school choice victories in the Supreme Courts of Wisconsin, Ohio, and Arizona ... Bolick has also set landmark precedents defending freedom of enterprise and private property rights and challenging corporate subsidies and racial classifications. Before joining the Goldwater Institute in 2007, Bolick was cofounder of the Institute for Justice and former president of the Alliance for School Choice.
Laissez Faire Books: Clint Bolick
Short biographical and bibliographical profile, followed by "Clint Bolick's Favorite Titles" (commentary on his five favorite books)

Bolick is co-founder, vice president and litigation director of the Institute for Justice, Washington, D.C. This is a public interest law firm that helps defend individual liberty against government regulation. Among other things, Bolick has successfully defended America's first tuition voucher program (in Milwaukee) and defeated barriers to entry in various professions. He has written ... Transformation: The Promise and Politics of Empowerment (1998), and Voucher Wars (2003). Bolick is co-author of The Age Lobby: Mortgaging America's Future (1990). He received his law degree from the University of California at Davis.
Related Topics: United States Constitution, Richard Epstein, Milton Friedman, Ayn Rand, Alexis de Tocqueville

Clint Bolick - Hero of the Day, The Daily Objectivist, 2000
Describes Bolick's unusual biographical blurb website at the Institute for Justice as well as his struggles with the educational establishment in Milwaukee (and elsewhere) over school vouchers

Whereas most bio blurbs merely rattle off a resume, IJ's promo of its VP, litigation director and co-founder stipulates that Clint Bolick possesses "the dreams of Don Quixote and the political savvy of a Boston pol. Combine those traits in a personality as animated as Clint's role model, Snoopy, and you have the Institute for Justice's litigation director. Clint applies his broad vision in defending rights that have been wronged with sophisticated, provocative arguments both in the courts and in the court of public opinion ... In Clint's wake, ... ordinary citizens regain a measure of freedom."
Related Topics: Educational Freedom, Wisconsin

Leviathan: The Growth of Local Government and the Erosion of Liberty, 2004
Partial contents: The Curious Evolution of Federalism - Freedom of Commerce and Enterprise - Private Property Rights - The Right to Be Left Alone - Racial Discrimination - The Government School System - Fighting Big Government At The Local Level
Related Topic: Limited Government
Transformation: The Promise and Politics of Empowerment, 1998
Contents: The Challenge of Empowerment - Grim Realities - Blacks and Whites on Common Ground - Economic Liberty - Community Renewal - Freedom from Crime - Empowerment, Politics, and Freedom
Voucher Wars: Waging the Legal Battle over School Choice
by Clint Bolick, Cato Institute, 2003
Contents: Introduction - Laying the Groundwork - Polly - False Starts - And Then There Were Five - Valley Forge - One in the Bank - A Blizzard of Decisions - Battles Within and Without - The Road to the Supremes - D-Day - The Road Ahead - Lessons
Related Topic: Educational Freedom

The introductory paragraph uses material from the Wikipedia article "Clint Bolick" as of 24 May 2018, which is released under the Creative Commons Attribution-Share-Alike License 3.0.