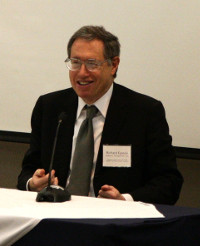 Richard Allen Epstein (born 17 April 1943) is an American legal scholar best known for his writings and studies on classical liberalism, libertarianism, torts, contracts and a wide variety of topics in law and economics. Epstein is currently the Laurence A. Tisch Professor of Law and director of the Classical Liberal Institute at New York University, the Peter and Kirsten Bedford Senior Fellow at the Hoover Institution, and the James Parker Hall Distinguished Service Professor of Law emeritus and a senior lecturer at the University of Chicago.

Epstein, Richard A. (1943- ), by Aaron Steelman, The Encyclopedia of Libertarianism, 15 Aug 2008
Biographical and bibliographical essay

Richard A. Epstein, a law professor and legal theorist, teaches at the University of Chicago Law School and is a senior fellow at the Hoover Institution at Stanford University. He is one of the leading legal scholars in the United States and a prominent libertarian author. Epstein's work on eminent domain brought him fame when Senator Joseph Biden held up a copy of Epstein's book Takings during the 1991 confirmation hearings of Clarence Thomas ... Epstein also has challenged established wisdom on employment discrimination laws, arguing that government intervention in employment contracts is unnecessary and even undesirable.
Related Topic: Libertarianism

Epstein (b. 1943) is one of today's most important legal thinkers for liberty. ... Epstein has written books which are having a significant influence among lawyers and are just beginning to get wider recognition. His first big book was Takings (1985), about the Fifth Amendment, which everybody knows says individuals can't be forced to testify against themselves. Most people had forgotten that the Fifth Amendment also says that when government takes private property, it must pay just compensation. ... The Supreme Court has taken a few tentative steps to apply Epstein's ideas.

Epstein is among the few authors who have described a comprehensive vision for a free society. He did it in two important books. The first, Simple Rules for a Complex World (1995), began by rebutting the conventional view that government must get bigger as society becomes more complex. ... Epstein went on to identify six legal principles which provide a legal framework for a free society. ... Principles for a Free Society: Reconciling Individual Liberty with the Common Good (1998) mounted a sturdy answer to all those intellectuals who claimed that laissez faire promotes greed, favors the rich and grinds under the poor and helpless.
Laissez Faire Books: Clint Bolick
Short biographical and bibliographical profile, followed by "Clint Bolick's Favorite Titles" (commentary on his five favorite books)

If [Ayn] Rand were alive, Richard Epstein would be her favorite law professor. Epstein is the most brilliant and prolific legal thinker today. Thankfully, he's also libertarian. Simple Rules for a Complex World is perhaps his most generally accessible work, illustrating how the basic rules that spring from human nature are still the best today, and that regulations designed to account for the complexity of our modern world are often self-defeating. Such crisp insights rarely emanate from American academia, which makes Epstein's works a rare treasure.
Related Topics: Clint Bolick, United States Constitution, Milton Friedman, Ayn Rand, Alexis de Tocqueville
Richard A. Epstein | Cato Institute
Adjunct scholar profile page, includes photograph and links to recent writings and events

Richard A. Epstein, the Laurence A. Tisch Professor of Law at NYU Law School, is an expert on numerous areas of the law, including property, torts, land use, civil procedure, contract law, workers’ compensation, and Roman law. He is the author of Takings: Private Property and Eminent Domain, Mortal Peril: Our Inalienable Right to Health Care, Skepticism and Freedom: A Modern Case for Classical Liberalism, and Simple Rules for a Complex World. He is also ... a senior lecturer at the University of Chicago where he was on the regular faculty from 1973 to 2010.
Richard A. Epstein | Hoover Institution
Senior Fellow profile page; includes photograph, biographical summary, areas of expertise, awards and recent commentary

A devastating amicus curiae brief has been submitted by three Cato Institute legal scholars and University of Chicago law professor Richard Epstein, a long-time critic of eminent domain whose book Takings was first published in 1985. In that brief, they demonstrate that the likelihood of any net benefit to New London is extremely small ... The Cato/Epstein brief hits the bull's eye in observing that eminent-domain cases like this one "result in a systematic unfairness to the individuals who are forced to sacrifice their property to some fuzzy vision of the public good."
Related Topics: Cato Institute, Eminent Domain Protections, Institute for Justice, Taxation
A Foreign Policy by and for Knaves, by Sheldon Richman, The Goal Is Freedom, 10 Oct 2014
Further thoughts on Richman's "Does Freedom Require Empire" (5 Sep 2014) prompted by Daniel McCarthy's counterpoint article as well as David Hume's and Leonard Read's writings

In responding to Richard Epstein's "faulty case for intervention," economist David R. Henderson writes: "The simple fact is that when a government thousands of miles away decides to intervene, it must figure out which faction to support and has little assurance that it will support the right one. Indeed, it has little assurance that there is a right one ... whatever else libertarian non-interventionists believe, few of us have what Professor Epstein calls an 'illusion of certainty.' It is the exact opposite ... There are many "monsters to destroy," to use John Quincy Adams's famous phrase ..."
Related Topics: David Hume, Imperialism, Personal Responsibility, Leonard Read
Law, Property Rights, and Air Pollution [PDF], by Murray N. Rothbard, Cato Journal, 1982
Examines the principles of tort law, how to determine what is just property and how to deal with invasions of property such as air pollution

From various illuminating discussions of Professor Epstein, it seems evident that there are three contrasting theories of tort liability interwoven in our legal structure ... In a brilliant analysis of causation in the law, Professor Epstein has demonstrated that his own theory of strict tort liability is intimately connected to a direct, strict, commonsense view of "cause." ... The result, as Epstein trenchantly points out, is to vitiate the concept of cause altogether and to set the courts free to decide cases arbitrarily and in accordance with their own views of social policy.
Related Topics: Randy Barnett, Cancer, Ethics, Law, Personal Responsibility, Property, Property Rights, Freedom of Speech
On the Origins of the Modern Libertarian Legal Movement [PDF], by Roger Pilon, Chapman Law Review, 2013
Historical survey of libertarian influences on constitutional and other areas of law, from the mid-1970s to recent decisions

Nozick had erected his argument on the assumption that people had rights ... a project that I and others were only too willing to take on ... But the lawyers also were at work at their end of the project, and none more productive or insightful than the man who arrived across the Midway a year after I got to Chicago, Richard Epstein. No stranger to philosophy—his undergraduate major at Columbia, my own alma mater—Epstein was at the time developing his theory of strict liability in torts, which dovetailed nicely with the Lockean understanding of rights, even as it contrasted with his colleague Richard Posner's negligence approach to torts.
Related Topics: Randy Barnett, Cato Institute, Friedrich Hayek, Institute for Humane Studies, Libertarianism, Robert Nozick, Enumerated Powers, Rights, Rights retained by the people

Life of Liberty: Robert Nozick, R.I.P., National Review Online, 24 Jan 2002
Memorial tribute, comparing Nozick to Hayek and discussing some of the arguments he made in Anarchy, State and Utopia

The bulletin on the Harvard University website reported Wednesday today the death at age 63 of Robert Nozick. The release goes on to write what everyone who knew Nozick would confirm. As teacher, friend, and colleague in no particular order, he was a restless intellectual capable of enlivening every discussion with a bewildering blitz of questions that always left you one step behind ... Those of us who knew him will miss him. Everyone on all sides of the political spectrum will benefit, under a principle of justice in intellectual transmission, from his spirited intellectual legacy in the service of liberty.
Related Topics: Friedrich Hayek, Robert Nozick, Self-ownership, The State

Richard A. Epstein, the James Parker Hall Distinguished Service Professor of Law at the University of Chicago, is one of the most provocative, controversial, and influential legal theorists in the country. His three best-known books ... are powerful contributions to the theory of limited state powers ... Epstein's work is characterized by a relentless and rigorous use of reason ... "When I'm confident I'm right, I want people to disagree with me out of hand. Otherwise, I run the risk of a kind of complacency which can lead to the loss of a cutting edge. I'm perfectly used to living in a world in which most people disagree."
Related Topics: Eminent Domain Protections, Government, Libertarianism, Right Against Unreasonable Searches and Seizures, Taxation

The introductory paragraph uses material from the Wikipedia article "Richard Epstein" as of 9 May 2018, which is released under the Creative Commons Attribution-Share-Alike License 3.0.