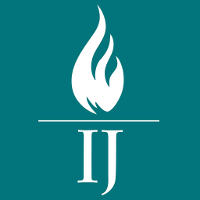 The Institute for Justice (IJ) is a non-profit libertarian public interest law firm in the United States. It has litigated five cases considered by the United States Supreme Court dealing with topics that included eminent domain, interstate commerce, public financing for elections, school vouchers and tax credits for private school tuition. The organization was founded in 1991. As of June 2016, it employed a staff of 95 (including 39 attorneys) in Arlington, Virginia and five regional offices across the United States. Its 2016 budget was $20 million.

Advocates for Self-Government - Libertarian Education: William Mellor - Libertarian
Includes picture and biographical profile, as well as a profile of the Institute for Justice

The Institute for Justice is the nation's premier libertarian public interest law firm. Their litigants are in courts across the country preserving freedom of opportunity and challenging government's control over individuals' lives. They sue governments when they stand in the way of entrepreneurs who seek to earn an honest living free from arbitrary and oppressive government interference. They litigate on behalf of individuals whose private property rights are threatened by government excesses. They represent parents who seek to choose the education that best meets their children's needs.
Related Topic: Chip Mellor

Ducey has just signed into law a bill that should seriously restrict the ability of law enforcement officers ... to abuse the process of civil asset forfeiture as a way of generating revenue ... The property-rights-protecting lawyers of the Institute for Justice praised the passage of the law as "incremental but important reforms." They've previously blasted Arizona's asset forfeiture laws and are suing the state over the way the system works. That lawsuit is going to continue because they're challenging the complex bureaucratic process that makes it harder for average citizens to resist having their stuff taken.
Related Topics: Arizona, Right Against Unreasonable Searches and Seizures
Confessions of a Welfare Queen: How rich bastards like me rip off taxpayers for millions of dollars, by John Stossel, Reason, Mar 2004
Discusses the National Flood Insurance Program, subsidies to farmers and farm corporations (such as Archer Daniels Midland) and Donald Trump's attempt to use eminent domain to expand a casino in Atlantic City

[New Jersey]'s Casino Reinvestment Development Authority filed a lawsuit in 1994 to "acquire" Coking's property. It told Coking she must vacate her home within 90 days or the sheriff would forcibly remove her ... But Vera Coking was lucky enough to get media attention—and to have a public-interest law firm, the Institute for Justice, take her case to court. In 1998 a judge finally ruled against Trump and the government, finding that taking the property would benefit Trump, not the public. Vera Coking got to keep her home. She still lives there, surrounded by Trump's hotel.
Related Topics: Eminent Domain Protections, Farming, Free Market, Government, Walter E. Williams
Eminent-Domain Chutzpah, by Sheldon Richman, 30 Oct 2006
Discusses a case in Riviera Beach, Florida where a developer was threatening to sue the city council for reneging on a supposed deal to use eminent domain on an area for private redevelopment

The state's standards for blight "are so vague they can mean anything," says Dana Berliner, an attorney with the Institute for Justice [IJ], the pro-property-rights public-interest law firm that represents some of the Riviera Beach homeowners ... "Across America," says Bert Gall, a senior attorney with [IJ], "local governments are using the power of eminent domain to seize private homes, businesses, farms, and houses of worship in order to transfer those properties to other private owners ... More often than not, governments justify these private-to-private transfers by making bogus 'blight' declarations ..."
Related Topics: Eminent Domain Protections, Florida
An End to Eminent Domain Abuse?, by George Leef, Freedom Daily, Apr 2005
Published just two months before the unfortunate Kelo v. City of New London U.S. Supreme Court decision, expresses hope that the court would rectify the 1954 Berman v. Parker ruling

Consider, for example, a distressing case that arose in Lakewood, Ohio. In that Cleveland suburb, city officials decided that they would rather have a new condominium and retail shopping development in place of a quiet old residential neighborhood ... The Lakewood case ... had an unexpectedly happy ending for defenders of property rights. The homeowners managed to fight back successfully. With expert legal and media advice from the Institute for Justice, they were able to cause so much adverse publicity on the proposed seizure that the developer backed off and eventually the designation "blighted" was removed.
Related Topics: Cato Institute, Eminent Domain Protections, Richard Epstein, Taxation
Extortion in Port Chester, by Sheldon Richman, 5 Jan 2007
Relates the case of the Village of Port Chester, New York which granted exclusive rights to a development area and then overrode the rights of Bart Didden whose property laid partly in that area

Didden went to federal court to stop the abuse, but the case was dismissed at the district and appellate levels because, the courts said, he filed too late. The Institute for Justice (IJ) tried to get the case before the U.S. Supreme Court ... Before the Court refused the case, IJ lawyer Dana Berliner had said that a victory for the Village "would mean that every redevelopment area in the country would be a Constitution-free zone. Any taking, no matter how private, would be OK as long as it was in those areas." Afterwards she added, "This abuse will only grow worse until the courts do their job and set some limits ..."
Related Topics: New York, Property Rights
The Fight for Free Speech in the Courts, by Trevor Burrus, Aaron Ross Powell, Paul Sherman, Free Thoughts, 18 Mar 2016
Burrus and Powell discuss with Paul Sherman, a senior attorney with the Institute for Justice, about freedom of speech issues, particularly political speech, and occupational licensing

So SpeechNow.org versus FEC was the case that gave rise to what are popularly known as super PACs. The Institute for Justice co-litigated the case with a group called the Center for Competitive Politics and basically what the case was about was this anomaly that had existed in the campaign finance laws since the 1970s ... I am totally on your side and I think that when – and this is something that the Institute for Justice argues is that when the government wants to restrict people's liberty, no matter what domain it's restricting in, the burden should be on the government, to justify why it is doing that.
Related Topics: Occupational Licensing, Freedom of Speech
Institute for Justice Publishes New Edition of Policing for Profit, by Adam Bates, 11 Nov 2015
Describes civil asset forfeiture, which has been exacerbated by the Drug War, and the new edition of the Institute's report on forfeiture practices in the various states

Yesterday, the Institute for Justice, which has long been a leader in the fight against the abusive practice of civil asset forfeiture, released a new edition of its important 2010 study Policing for Profit ... Thanks to the work of organizations like IJ, journalist exposés of numerous egregious abuses, and legislators committed to the rule of law, several states have reformed their forfeiture laws ... The report also includes updates to IJ's state-by-state assessments of forfeiture laws, with 35 states and the federal government earning grades of D+ or worse. IJ also released an excellent video to summarize their findings ...
Related Topic: Right Against Unreasonable Searches and Seizures
Prohibition Hasn't Ended Yet, by Lawrence Reed, The Freeman, Jul 2001
Discusses laws in 30 states that forbid purchases of wine from other states unless done through a state-licensed liquor agent

According to Deborah Simpson of the Institute for Justice (IJ), a Washington, D.C.-based legal advocacy group with a track record of getting special-interest legislation thrown off the books:

Laws in most of the 30 "prohibition" states even forbid tourists who visit wineries to ship a bottle or a case of wine home to themselves. Seven states classify such shipments as a felony. In some states, like Maryland, a consumer may not even carry wine back home from a visit across the Potomac to Virginia's wine country ..."

... IJ is litigating a challenge to a similar [to Michigan] state law in New York.
Related Topics: Commerce Clause, Michigan, Prohibition
We Shouldn't Have to Ask the State's Permission to Work, by Robert Fellner, 13 Mar 2017
Discusses occupational licensing laws, focusing on the onerous requirements imposed by the state of Nevada

Under Mellor's leadership IJ pioneered a new approach to strategic public interest litigation that combines courtroom advocacy with award-winning media relations, activism and strategic research to secure constitutional protection for individual rights. He grew IJ from a five-person startup into the National Law Firm for Liberty with a staff of nearly 100, including over 40 attorneys ... IJ is headquartered in Arlington, Virginia, and has offices in Arizona, Florida, Illinois, Minnesota, Texas and Washington state. While Mellor was president, IJ litigated five U.S. Supreme Court cases, winning all but one ...
Related Topic: Chip Mellor

The introductory paragraph uses material from the Wikipedia article "Institute for Justice" as of 26 May 2018, which is released under the Creative Commons Attribution-Share-Alike License 3.0.