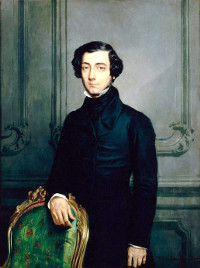 Alexis Charles Henri Clérel, Viscount de Tocqueville (29 July 1805 – 16 April 1859) was a French diplomat, political scientist and historian. He is best known for his works Democracy in America (appearing in two volumes: 1835 and 1840) and The Old Regime and the Revolution (1856). In both he analyzed the improved living standards and social conditions of individuals, as well as their relationship to the market and state in Western societies. Democracy in America was published after Tocqueville's travels in the United States and is today considered an early work of sociology and political science.

Alexis de Tocqueville was one of the foremost scholars of the French Revolution and of the early American republic ... Tocqueville is best remembered for his work as a political theorist. His observations on monarchical and representative government, commerce, and individual liberty make him perhaps the most influential of all modern social commentators. Tocqueville emphasized that healthy societies develop naturally from the free pursuit of legitimate ends; he mistrusted both aristocracy and centralized government, and he stressed the limits of any government's ability to enact social change.
Related Topics: France, Government, Socialism, United States

For the reader who wants to understand the underpinnings of he American experiment, Democracy in America by Alexis de Tocqueville — the greatest achievement by a Frenchman since Bordeaux wines — and The Federalist Papers ... are essential readings. Tocqueville described the attributes that make America unique and great in a way that was insightful nearly 200 years ago and remains so today. The Federalist Papers explains what the Constitution is all about ... I consult both far more than modern texts on law, whenever I need to point the right direction on the constitutional compass.
Related Topics: Clint Bolick, United States Constitution, Richard Epstein, Milton Friedman, Ayn Rand

On August 8, 1761, Turgot was appointed an intendant (chief administrator) for ... a region in central France later known as Limoges. As the nineteenth-century historian and thinker Alexis de Tocqueville explained, "The intendant was in possession of the whole reality of Government. All the powers which the Council of State itself possessed were accumulated in his hands. Like the Council he was at once administrator and judge. He corresponded with all the Ministers, and in the province was the sole agent of all the measures of the Government."
Related Topics: John Adams, Bureaucracy, France, Free Trade, Gold Standard, Government, Labor, Money, François Quesnay, Freedom of Religion, Joseph Schumpeter, Slavery, Adam Smith, Freedom of Speech, Taxation, Anne Robert Jacques Turgot
Subjugating Ourselves, by Sheldon Richman, The Goal Is Freedom, 7 May 2010
Examines key passages from La Boetie's Discourse on Voluntary Servitude and criticizes newspaper editorial writers (with a recent example) for preaching to the people to acquiesce and submit to government

As I discussed recently, Alexis de Tocqueville thought democracies were prone to despotism, albeit a milder kind, but despotism nevertheless. As he wrote in Democracy in America, people living in democracies "combine the principle of centralization and that of popular sovereignty this gives them a respite: they console themselves for being in tutelage by the reflection that they have chosen their own guardians. Every man allows himself to be put in leading-strings, because he sees that it is not a person or a class of persons, but the people at large who hold the end of his chain."
Related Topics: Democracy, Government, Étienne de La Boétie, Discourse on Voluntary Servitude
War Is Peace and Other Things the Government Wants You to Believe [PDF], by Sheldon Richman, Jun 2008
Transcript of speech given at The Future of Freedom Foundation's June 2008 conference, “Restoring the Republic: Foreign Policy & Civil Liberties”, including audience questions

We were an unruly, rambunctious, individualist people. And that didn't mean we didn't like other people. It wasn't the "rugged individualism." Because if you read Tocqueville in his great book on Democracy in America, he talked about how Americans formed associations to accomplish things at the drop of a hat. Anything that one individual or maybe his family couldn't accomplish on their own and then had some general benefits to the community, people set up an association, some kind of club or some kind of organization to accomplish this. So it wasn't that Americans in those days were unsocial, or hermits ...
Related Topics: American Revolutionary War, Standing Army, Thirteen Colonies, United States Constitution, England, Government, Jeffrey Rogers Hummel, James Madison, The Matrix, Military Industrial Complex, George Orwell, Freedom of the Press, Television Shows, Vietnam War, War
What It Means to Be a Libertarian [PDF], by Randolph J. May, Cato Journal, 1997
Review of Charles Murray's book What It Means to Be a Libertarian (1997), contrasting it with Tocqueville's writings in Democracy in America (1835-1840)

Although only 25 years old when [Tocqueville] arrived in May 1831 for his 9-month visit to America and only 30 when he published the first part of his great work, Tocqueville was more than just an astute observer of the American scene. He was, of course, a political philosopher of the first rank ... He predicted that in modern states, including democracies, there almost certainly would be a dangerous tendency toward centralization of power that would threaten individual freedom. In Tocqueville's view, only mediating institutions such as private associations, possibly could moderate such tendency.
Related Topics: Democracy, Limited Government, Libertarianism, Moral Liberty, Charles Murray, Personal Responsibility

The introductory paragraph uses material from the Wikipedia article "Alexis de Tocqueville" as of 7 Aug 2018, which is released under the Creative Commons Attribution-Share-Alike License 3.0.