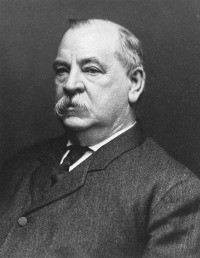 Stephen Grover Cleveland (18 March 1837 – 24 June 1908) was an American politician and lawyer who was the 22nd and 24th president of the United States, the only president in American history to serve two non-consecutive terms in office (1885–89 and 1893–97). He won the popular vote for three presidential elections – in 1884, 1888 and 1892 – and was one of two Democrats (with Woodrow Wilson) to be elected president during the era of Republican political domination dating from 1861 to 1933.

Grover Cleveland - Hero of the Day, by H. L. Mencken, The American Mercury, Jan 1933
Excerpted from Mencken's review of Grover Cleveland: a Study in Courage by Allan Nevins

We have had more brilliant Presidents than Cleveland, and one or two who were considerably more profound, but we have never had one, at least since Washington, whose fundamental character was solider and more admirable. ... He got on in politics, not by knuckling to politicians, but by scorning and defying them, and when he found himself opposed in what he conceived to be sound and honest courses, not only by politicans but by the sovereign people, he treated them to a massive dose of the same medicine. No more self-sufficient man is recorded in modern history.
Martin Van Buren: The Greatest American President [PDF], by Jeffrey Rogers Hummel, The Independent Review, 1999
Discusses the Van Buren presidency and why he should be considered "the greatest president in American history"

Because I am holding Van Buren up to a libertarian yardstick, perhaps it would be more appropriate to compare him with other nonactivist chief executives, whom mainstream historians tend to dismiss. Grover Cleveland, a later Democratic president who similarly confronted a major economic depression, is in my opinion the strongest contender for superior accolades, but his signing of the Interstate Commerce Act, his use of troops during the Pullman strike, and his involvement in the Venezuelan boundary dispute demonstrate a weaker commitment to free markets, civil liberties, and nonintervention.
Related Topics: Banking, Andrew Jackson, Martin Van Buren, War
No More Great Presidents, by Robert Higgs, The Free Market, Mar 1997
Discusses the results of a 1996 poll of historians asking them to rank U.S. presidents, focusing on those ranked Great, Near Great and Failure, and offers his own ranking

Not since the presidency of Grover Cleveland has any president achieved greatness by this standard [acting in accordance with the oath of office] ... Grover Cleveland, though far from perfect, may have been the best. He kept the country at peace. He respected the Constitution, acknowledging that the national government has only a limited mission to perform and shaping his policies accordingly. He fought to lower tariffs; preserved the gold standard in its time of crisis; and restored order forcibly when hoodlums disturbed the peace on a wide front during the great railroad strike of 1894.
Related Topics: United States Constitution, Thomas Jefferson, Abraham Lincoln, Richard Nixon, United States Presidents, Franklin D. Roosevelt, War, George Washington, Woodrow Wilson

The introductory paragraph uses material from the Wikipedia article "Grover Cleveland" as of 17 May 2018, which is released under the Creative Commons Attribution-Share-Alike License 3.0.