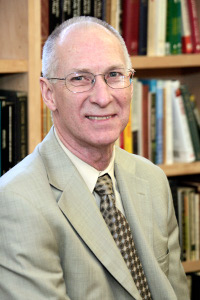 Robert Higgs (born 1 February 1944) is an American economic historian and economist combining material from Public Choice, the New institutional economics and the Austrian school of economics; and describes himself as a libertarian anarchist in political and legal theory and public policy. His writings in economics and economic history have most often focused on the causes, means and effects of government power and growth.

If Robert Higgs had written only one book, the magisterial Crisis and Leviathan, his place would be forever secure in the libertarian firmament. ... In an interview with ... Paul Craig Roberts (... 2003) Higgs elaborated on the theme of the book. 'In countless ways, the warfare state has proved inimical to the preservation of liberty,' he said. 'War brings higher taxes, greater government debt, increased government intrusion in markets, more pervasive government surveillance, manipulation, and control of the public. Going to war is the perfect recipe for expanding the size, scope, and power of the federal government.'
The Independent Institute
Includes photo, profile and links to selected books, articles, audio and video

How Star Wars Can Lead America Off the Dark Path, by Dan Sanchez, 4 May 2017
Examines the first two Star Wars trilogies, drawing parallels to 20th and 21st century U.S. and world history, and draws lessons from the films that could help the United States from "giving in to the dark side"

"It is with great reluctance that I have agreed to this calling. I love democracy! I love the Republic! Once this crisis has abated, I will lay down the powers you have given me."

... The emergency-propelled rise of the Sith also fits with Robert Higgs's broader insight that crisis is the health of Leviathan ... As Higgs detailed, the expansions of state size and power that occur during a war or other emergency are generally scaled back after the crisis passes, but never all the way down to the pre-crisis level. Thus, the power of the state ratchets up with every war.
Related Topics: Friedrich Hayek, Non-aggression Principle, Star Wars, The State, Terrorism, United States, War
An Interview With David Theroux, by David J. Theroux, Strike The Root, 2 Sep 2003
Topics discussed include: the Independent Institute, Theroux's life before founding it, possible connection to Thoreau, the Vietnam War, his heroes and influencers, activism, September 11 and book recommendations

Our quarterly journal, The Independent Review, is edited by the distinguished economist and historian, Robert Higgs, Senior Fellow in Political Economy at The Independent Institute ... I would strongly suggest that your readers read Crisis and Leviathan, by Robert Higgs, in order to understand the nature of government power and what is going on now. Higgs authoritatively documents how and why "War is the health of the state." If you have not read this book and/or articles based on it, you cannot really understand liberty and be effective in combating statism.
Related Topics: Attacks of 11 September 2001, F. A. Harper, Friedrich Hayek, Independent Institute, Libertarianism, Threats To Liberty, Henry David Thoreau, Vietnam War
Libertarian moment or movement?, by Robert J. Cihak, Michael A. Glueck, 24 Jan 2003
Two months before the 2003 Iraq invasion, presents the views of Robert Higgs and David Theroux as to whether the libertarian movement can have "a major role to play in post-9/11 America"

Robert Higgs, a political economist who taught at several universities and who now edits the Independent Review, says "There's no libertarian moment now. Times such as the present are most difficult because crisis conditions always make the general public more submissive to authority than usual ..." Higgs spent decades documenting this process of "crisis opportunism." His 1987 classic, "Crisis and Leviathan: Critical Episodes in the Growth of American Government," lays out what most of us know intuitively. Government grows via what he calls the "ratchet effect" ...: periods of relative stasis followed by spasms of activity.
Related Topics: Government, Libertarianism, David J. Theroux
Machiavelli and U.S. Politics, Part 4: War, by Lawrence M. Ludlow, 22 Aug 2005
Part of a six-segment series examining The Prince vis-à-vis contemporary U.S. politics; this article covers Machiavelli's simple advice on war and contrasts it with that of James Madison and Robert Higgs in Crisis and Leviathan

In his book Crisis and Leviathan, Robert Higgs showed how wars and economic crises help to expand the power of government and diminish individual liberties. In one example, he showed how the Wilson administration overcame the opposition of Americans to involvement in World War I by hiding its true costs. Instead of relying on free-market purchases to acquire needed resources (and reveal all costs), the government resorted to command-and-control measures and propaganda to head off opposition ... In one example, Higgs outlined an argument used during World War II to justify centralized economic controls ...
Related Topics: George W. Bush, Compulsory Education, James Madison, Freedom of the Press, Prices, Terrorism, Travel, War
The Myth of War Prosperity, Part 1, by Anthony Gregory, Future of Freedom, Dec 2006
Introduction to the review of Depression, War, and Cold War: Studies in Political Economy (2006) by Robert Higgs

Thank goodness for Robert Higgs, a historian of political economy and senior fellow at the Independent Institute ... His recent collection of academic work, Depression, War, and Cold War: Studies in Political Economy, somewhat of a sequel to his academic masterpiece of 20 years ago, Crisis and Leviathan, fills the gap in empirical evidence where we have previously had primarily theory to guide us. He thoroughly examines the political economy of the United States from the Great Depression to the end of the Cold War ... In his area of focus, he has almost surely delved further than any economist before him.
Related Topics: Broken Window Fallacy, Government, War, World War II
A scholar's scholar retires, by Donald J. Boudreaux, TribLIVE.com, 21 Jul 2015
Discusses Higgs' retirement, highlighting his books Competition and Coercion and Crisis and Leviathan as well as his identification of "regime uncertainty"

Bob is one of our greatest living scholars. Specializing in economic history, Bob's first major work is his 1976 book, "Competition and Coercion." In it, Bob documents the many ways that economic competition—including people's ability to move from place to place—enabled blacks to improve their economic situation after the Civil War. These improvements came despite the bigotry that then reigned in the South—and despite the activities of government ... Bob's most famous book is his 1987 study, "Crisis and Leviathan." ... Another of Bob's key contributions is his identification of the role of "regime uncertainty."
Related Topics: Government, Franklin D. Roosevelt, The State

Atrocities in the 'Good War': A Tract for Today, 19 Jun 2006
Introduces excerpt from Edgar L. Jones' article "One War is Enough", Atlantic Monthly Feb 1946, as "valuable lessons" for those pondering the atrocities committed in the Iraq War

Even Americans who detest war and recognize that nearly every war is the product of mendacious, power-hungry political leaders generally make an exception for World War II, the so-called Good War. They believe that the Americans fought for an entirely good and proper cause, that they fought only after having been attacked without provocation, that their enemies were vile monsters ... Some of the actions he described in that article may come as a shock to many readers today; they're not the sort of actions John Wayne was taking in all those postwar movies about World War II. Yet, over the years, many ... have confirmed them.
Related Topics: Iraq War, War, World War II
No More Great Presidents, The Free Market, Mar 1997
Discusses the results of a 1996 poll of historians asking them to rank U.S. presidents, focusing on those ranked Great, Near Great and Failure, and offers his own ranking

My idea of a great president is one who acts in accordance with his oath of office to "preserve, protect, and defend the Constitution of the United States." Not since the presidency of Grover Cleveland has any president achieved greatness by this standard. Worse, the most admired have been those who failed most miserably ... American liberty will never be reestablished so long as elites and masses alike look to the president to perform supernatural feats and therefore tolerate his virtually unlimited exercise of power. Until we can restore limited, constitutional government in this country, God save us from great presidents.
Related Topics: Grover Cleveland, United States Constitution, Thomas Jefferson, Abraham Lincoln, Richard Nixon, United States Presidents, Franklin D. Roosevelt, War, George Washington, Woodrow Wilson
Peace and Pacifism, The Encyclopedia of Libertarianism, 15 Aug 2008
Reviews what prominent classical liberals and libertarians had to say on the subject of peace and war, as well as the history of United States wars from the War of 1812 to the 2003 invasion of Iraq and the efforts of those who opposed them

Although relatively few libertarians are pacifists, libertarians tend to be substantially less bellicose than the average citizen. Modern libertarianism has deep roots in classical liberalism, an ideology that looks at war as a reactionary undertaking at odds with the social progress that springs, in large part, from the unhampered movement of goods, capital, and labor across national borders and from international scientific and cultural cooperation. ... Of the relatively few libertarians who also were pacifists, perhaps the most notable was the great Russian writer Leo Tolstoy.
Related Topics: American War Between the States, Libertarianism, Ludwig von Mises, Murray Rothbard, Adam Smith, Freedom of Speech, Lysander Spooner, William Graham Sumner, Vietnam War, War, World War I, World War II
The President Seems Out of Touch With Events on the Ground in Iraq, 31 May 2006
Contrasts a George W. Bush speech given at West Point with nearly concurrent news reports about the Haditha massacre

On May 27, President George W. Bush delivered a speech at the graduation ceremonies of the U.S. Military Academy at West Point, New York. He spoke about the military actions that U.S. forces are currently conducting in the Middle East and elsewhere. ... In a more fundamental sense, however, every person the U.S. forces have killed in Iraq is the victim of a murder, because the U.S. forces had no just grounds for invading and occupying the country in the first place—this war is a textbook case of unprovoked aggression—and the Iraqis and their friends have a just right of self-defense against these violent foreign invaders.
Related Topics: George W. Bush, Haditha Massacre, Iraq War
A Viper Lived in Johnny's House, or A Child's First Verse in Political Philosophy, 9 Oct 2006
An allegorical poem about vipers that people keep in their houses

A viper lived in Johnny's house, so
all in the family understood
that they must watch their steps although
the snake had not struck – they knew it could.

One day Johnny ventured to query
why they kept a serpent at home;
he asked his father, who seemed leery
of responding: 'Go and ask your mom.'
...
The viper, they now realized, had
been evil all right, but unneeded,
and his absence made everyone glad.
Johnny's bold stroke entirely succeeded.
Related Topic: The State

Faculty Spotlight Interview: Robert Higgs, 2 Dec 2010
Questions Higgs about free time and hobbies, the Austrian school and the Mises Institute, his greatest inspiration, his book Crisis and Leviathan, his work and "words of wisdom" for the next generation of scholars

Q: Who is your greatest inspiration?
A: Early in my training as an economist, I was inspired by Simon Kuznets and Douglass C. North. Soon afterward, I took considerable inspiration from Gary Becker, Milton Friedman, George Stigler, Ronald Coase, and Armen Alchian and from economic historians such as Nathan Rosenberg, Robert Fogel, and Stanley Engerman, among others. Later still, Schumpeter, Hayek, Mises, Rothbard, and James Buchanan exerted greater influence on my thinking. In retrospect, I regard Mises as the giant among these figures.
Related Topic: Austrian Economics

War and the Growth of Government, Mises University, 20 Jul 2015
Includes a six minute introduction where Lew Rockwell presents the 2015 Murray N. Rothbard Medal of Freedom to Higgs; discusses, with many examples, how wars and militarism influenced the growth of government
Related Topic: War

The introductory paragraph uses material from the Wikipedia article "Robert Higgs" as of 18 Apr 2018, which is released under the Creative Commons Attribution-Share-Alike License 3.0.