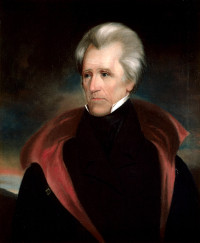 Andrew Jackson (15 March 1767 – 8 June 1845) was an American soldier and statesman who served as the seventh president of the United States from 1829 to 1837. Before being elected to the presidency, Jackson gained fame as a general in the United States Army and served in both houses of Congress. As president, Jackson sought to advance the rights of the "common man" against a "corrupt aristocracy" and to preserve the Union.

Jackson, an ardent Jeffersonian and Old Republican, was ... dedicated to a new Democratic Party that would restore original Jeffersonian Republican principles of laissez-faire and ultra-minimal government. Jackson followed Jefferson in managing, for the second and presumably the last time in American history, to repay the national debt ... Jackson, a wealthy cotton planter and merchant in Nashville, had been energized by corruption in the Monroe administration and by the bank credit collapse in the Panic of 1819. He had served in the House of Representatives and twice in the US Senate.
Related Topics: John Adams, Bureaucracy, Founding Fathers, Government, Limited Government, Ulysses S. Grant, Thomas Jefferson, Andrew Johnson, Richard Nixon, Parkinson's Law, Pennsylvania, Political Parties, Spoils System, Martin Van Buren, Voting, George Washington
Martin Van Buren: The Greatest American President [PDF], by Jeffrey Rogers Hummel, The Independent Review, 1999
Discusses the Van Buren presidency and why he should be considered "the greatest president in American history"

In the midst of Old Hickory's second term ... the president's hot temper almost provoked conflict with France over spoliation claims arising out of depredations on American commerce during the Napoleonic Wars. ... The hero of New Orleans had looked on with pleasure as American settlers in the Mexican province of Texas declared independence in 1836 ... Although the Little Magician helped to delay formal U.S. recognition of Texas independence until he had won the 1836 presidential election, the retiring Jackson menacingly pressed American claims for monetary damages against the Mexican government.
Related Topics: Banking, Grover Cleveland, Martin Van Buren, War
The Post Office as a Violation of Constitutional Rights, by Wendy McElroy, The Freeman, May 2001
Prompted by the announcement of the U.S. Postal Service eBillPay service (now discontinued), surveys the history of mail service vis-à-vis civil rights, from colonial days to the present

In Andrew Jackson’s first annual message to Congress ... (1829), he declared of the Post Office: '... this Department is chiefly important as affording the means of diffusing knowledge ... Through its agency we have secured to ourselves the full enjoyment of the blessings of a free press.' By 1835, however, Jackson's address to Congress struck a different note concerning the post office and freedom of the press. ... Some Southern politicians and postmasters called for a ban of seditious literature—namely, antislavery literature—from the mails. Jackson recommended that Congress pass a law to allow the prohibition.
Related Topics: United States Constitution, Marriage, Monopoly, Freedom of the Press, Moral Repression, Right Against Unreasonable Searches and Seizures, Freedom of Speech, Lysander Spooner, Benjamin Tucker, George Washington
States' Rights vs. Monetary Monopoly, by Thomas DiLorenzo, 9 May 2003
Recounts the story of how various states and Andrew Jackson maneuvered against the second Bank of the United States (BUS) eventually causing it not to be re-chartered

Americans once utilized ... states' rights traditions of nullification and interposition to assist President Andrew Jackson in his campaign to veto the re-chartering of the Second Bank of the United States (BUS) in 1832. Jackson essentially ended central banking in America until it was revived thirty years later by the Lincoln administration. ... Andrew Jackson essentially said 'thank you for your opinion' and then thumbed his nose at the Court when it ruled that the BUS was constitutional. ... Andrew Jackson is usually given credit for (temporarily) ending central banking in America in the nineteenth century.
Related Topics: Ohio, United States, Woodrow Wilson

The introductory paragraph uses material from the Wikipedia article "Andrew Jackson" as of 21 May 2018, which is released under the Creative Commons Attribution-Share-Alike License 3.0.