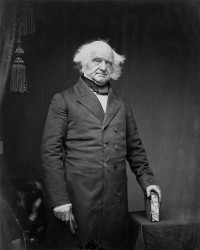 Martin Van Buren (5 December 1782 – 24 July 1862) was an American statesman who served as the eighth President of the United States from 1837 to 1841. A founder of the Democratic Party, he served as the ninth Governor of New York, the tenth Secretary of State, and the eighth Vice President. Van Buren won the 1836 presidential election based on the popularity of outgoing President Andrew Jackson and the organizational strength of the Democratic Party. He lost his 1840 re-election bid to Whig Party nominee William Henry Harrison due in part to the poor economic conditions of the Panic of 1837. Later in his life, Van Buren emerged as an important anti-slavery leader, and he led the Free Soil ticket in the 1848 presidential election.

[Martin] Van Buren, the brilliant political tactician who had been inspired by a weekend with Jefferson at Monticello in May 1824 to spend his life forming a new political party — later to be the Democratic Party — dedicated to taking back America for the old cause, for the libertarian Old Republican ideals of 1776 and 1798 ... Van Buren, his successor and an ardent Jacksonian, had little reason to remove Jacksonian officials. In his last two years in office, he removed 364 postmasters, amounting to about three percent of 12,000, to tighten the officialdom a bit for the coming election campaign.
Related Topics: John Adams, Bureaucracy, Founding Fathers, Government, Limited Government, Ulysses S. Grant, Andrew Jackson, Thomas Jefferson, Andrew Johnson, Richard Nixon, Parkinson's Law, Pennsylvania, Political Parties, Spoils System, Voting, George Washington
Martin Van Buren: The Greatest American President [PDF], by Jeffrey Rogers Hummel, The Independent Review, 1999
Discusses the Van Buren presidency and why he should be considered "the greatest president in American history"

Born of humble Dutch ancestry in December 1782 in the small, upstate New York village of Kinderhook, Van Buren gained admittance to the bar in 1803 without benefit of higher education. ... Van Buren succeeded to the presidency as Old Hickory's heir apparent on March 4, 1837, but this triumphant fulfillment of a lustrous career would prove short-lived. ... a close examination of Van Buren's four years in office reveals that historians have grossly underrated his many remarkable accomplishments in the face of heavy odds. Those accomplishments, in my opinion, rank [him] as the greatest president in American history.
Related Topics: Banking, Grover Cleveland, Andrew Jackson, War
Martin Van Buren: The American Gladstone, by Jeffrey Rogers Hummel, Reassessing the Presidency, 2001
Revised version of the 1999 essay "Martin Van Buren: The Greatest American President", now a chapter in Reassessing the Presidency: The Rise of the Executive State and the Decline of Freedom (2001)

On top of his sincere desire for friendly relations with all foreign powers, Van Buren correctly foresaw that territorial expansion might split Democratic ranks. He therefore deftly rebuffed Texas overtures, and Secretary of State John Forsyth of Georgia announced on August 25, 1837, formal rejection of the offer of annexation ... President Van Buren also could have had a war over Canada ... The president responded to the crisis by issuing two strong proclamations of neutrality, by calling out the militias of New York and Vermont to enforce the proclamations, and by sending General Winfield Scott on a mediatory mission.
Related Topics: Canada, Democratic Party, Thomas Jefferson

The introductory paragraph uses material from the Wikipedia article "Martin Van Buren" as of 26 May 2018, which is released under the Creative Commons Attribution-Share-Alike License 3.0.