Sixteenth President of the United States 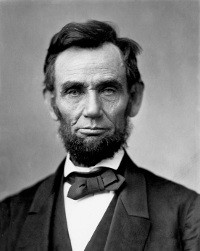 Abraham Lincoln (12 February 1809 – 15 April 1865) was an American statesman and lawyer who served as the 16th President of the United States from March 1861 until his assassination in April 1865. Lincoln led the United States through its War Between the States—its bloodiest war and perhaps its greatest moral, constitutional and political crisis. In doing so, he preserved the Union, abolished slavery, strengthened the federal government and modernized the economy.

Democracy Versus Liberty, by James Bovard, The Freeman, Aug 2006
Discusses the dangers of equating liberty with "self-government" as majority rule

"Abraham Lincoln was by far the most avid champion of democracy among nineteenth-century presidents—and the president with the greatest visible contempt for the Constitution and the Bill of Rights. He swayed people to view national unity as the ultimate test of the essence of freedom. That Lincoln suspended habeas corpus, jailed 20,000 people without charges, forcibly closed hundreds of newspapers that criticized him, and sent in federal troops to shut down state legislatures was irrelevant because he proclaimed 'that this nation shall have a new birth of freedom ...'"
Related Topics: United States Bill of Rights, George W. Bush, Bill Clinton, Democracy, Government, Liberty, Richard Nixon, Ronald Reagan, Franklin D. Roosevelt, Woodrow Wilson
Emergencies: The Breeding Ground of Tyranny, by William L. Anderson, Future of Freedom, Nov 2006
Examines the long history of "emergency powers" claimed by U.S. Presidents, including recent examples such as sanctions stemming from the International Economic Powers Act and the so-called War on Terror

"Although other presidents have engaged in conduct that arguably could be termed an abuse of power, no one truly claimed 'emergency' powers until Abraham Lincoln, who in 1861 suspended habeas corpus, ordered the arrest of thousands of people, and held others without trial. ... he established a number of precedents that demonstrated that if a president wishes to cross the line of legality, there is little to stop him from doing so. ... From the blockade against Southern ports to the war effort itself, Lincoln assumed powers of the presidency that his critics said were not appropriated by the Constitution."
Related Topics: American War Between the States, Jimmy Carter, Government, Law, Franklin D. Roosevelt, Terrorism, George Washington, Woodrow Wilson
Honoring Jefferson, by Joseph Sobran, 1 Jul 2004
Argues the 2004 cover of Time magazine, featuring Jefferson, as well as numerous articles in it, merely pay "lip service (to his genius) while missing the essence of it"

"One of Jefferson's recent biographers remarks that this argument was 'dangerously close' to an argument for the states' right to secede from the Union. ... The new president, Abraham Lincoln, who claimed to be a disciple of Jefferson, had to ignore much of Jefferson's thought in order to justify suppressing secession as 'rebellion.' He incessantly cited the truth that all men are created equal, but he evaded the part about the consent of the governed and established military dictatorships in the conquered South, while effectively criminalizing Jefferson's views on secession in the North."
Related Topics: Thomas Jefferson, John Locke
How Lincoln Gave Us Kwanzaa, by Joseph Sobran, The Reactionary Utopian, 7 Dec 2006
While planning for his holidays, Sobran discusses a couple of books about the Gettysburg Address

"According to Lincoln, the Declaration 'brought forth a new nation.' That is plainly not true. The Declaration says nothing about a 'nation'; it speaks only of 13 'Free and Independent States.' ... But Lincoln’s worshippers, bewitched by his eloquence, ... overlook not only his lapses in logic but his gross violations of the Constitution: usurpations of power, suspension of habeas corpus, arbitrary arrests of dissenters and even elected officials, crackdown on the free press, the Emancipation Proclamation (Lincoln himself doubted his authority to issue it but finally yielded to Republican pressure), and so on. "
How Much Do You Know About Liberty? (a quiz), The Freeman, Jun 1996
A 20-question quiz (with answers) on various topics related to liberty in the history of the United States

"How many slaves were liberated by Lincoln's Emancipation Proclamation? ... The Emancipation Proclamation didn't free a single slave. President Lincoln issued it on September 22, 1862, and it applied only to slaves in the rebel South—then beyond Union control. The aim of this war measure was to help stir insurrection in the South. The Emancipation Proclamation didn't apply to the North or loyal border states, so slavery continued there."
Related Topics: United States Bill of Rights, Bureaucracy, Compulsory Education, Entrepreneurship, Farming, Federal Reserve System, Free Trade, John Hancock, Warren G. Harding, Labor, Liberty, Monopoly, Prohibition, Taxation, Right to Trial by Jury, War
Lincoln's Presidential Warrant to Arrest Chief Justice Roger B. Taney: 'A Great Crime' or a Fabrication?, by Charles Adams, 5 Jan 2004
Examines the evidence that Lincoln signed a warrant to arrest Supreme Court Chief Justice Roger Taney

"It does seem too preposterous to be true, probably because of all the grave errors and wrongs allegedly committed by Lincoln's administration, this would rank at the top of the list. ... Lincoln ... accepted the Machiavellian doctrine that the end justified the means, when the end was to preserve the Union, and was to be achieved regardless of the Constitution and rulings of the Supreme Court. Lincoln expressed that policy to a Chicago clergyman: 'As commander in chief of the army and navy, in time of war, I suppose I have a right to take any measure which may best subdue the enemy.' "
Related Topic: Writ of Habeas Corpus
Lincoln-Worship Overlays the Corporatist Agenda, by Kevin Carson, Future of Freedom, Mar 2014
Review of Rich Lowry's Lincoln Unbound: How an Ambitious Young Railsplitter Saved the American Dream — and How We Can Do It Again (2013)

"... Lincoln's vision of the society he wanted to build implied an aversion to the society it would replace. In many ways his father, Thomas Lincoln, symbolized everything he wanted to eradicate from American society. ... Lincoln was a direct descendant of the modernizing Puritans of the 17th century, who banned the large number of saints' days on which peasants previously rested and celebrated, and imposed the Calvinist Sabbath on what had been a day of games and enjoyment. ... the economy that Lincoln built compelled the average person to work harder than necessary to achieve a given level of consumption."
Related Topic: Corporatism
No More Great Presidents, by Robert Higgs, The Free Market, Mar 1997
Discusses the results of a 1996 poll of historians asking them to rank U.S. presidents, focusing on those ranked Great, Near Great and Failure, and offers his own ranking

"It does not matter how ill-conceived the war may be. Lincoln achieved his presidential immortality by quite unnecessarily plunging America into its greatest bloodbath--ostensibly to maintain the boundaries of an existing federal union, as if those boundaries possessed some sacred status. ... What weight does Grant's Credit Mobilier scandal have in comparison to Lincoln's 620,000 dead in the Civil War? ... Were I to rank the presidents ... Lincoln, Wilson, FDR, Truman, and Lyndon Johnson belong at the bottom, for their statist economic policies as well as their supremely catastrophic war policies."
Related Topics: Grover Cleveland, United States Constitution, Thomas Jefferson, Richard Nixon, United States Presidents, Franklin D. Roosevelt, War, George Washington, Woodrow Wilson
Taking the gloss off of the Great Emancipator, by Jeffrey Rogers Hummel, Chicago Tribune, 12 Feb 2009
Examines Lincoln's attitude toward the abolition of slavery as well as the effects of his war on the growth of government

"Abraham Lincoln is justly celebrated as the Great Emancipator. ... unfortunately, Lincoln did almost as much to repudiate as to reaffirm the radical principles of the Declaration of Independence. To begin with, the 16th president's determination to hold the Union together with military force was an explicit rejection of the revolutionary right of self-determination. ... Moreover, Lincoln elevated the suppression of Southern independence above any concern for blacks. ... Fortunate for the slaves that Lincoln ultimately concluded that freeing them offered the most military and political advantages."
Related Topic: American War Between the States
The Federal War on Gold, Part 2, by Jacob Hornberger, Future of Freedom, Sep 2006
Continues with the brief monetary history of the United States, discussing Abraham Lincoln's war loans and legal tender law, and the Supreme Court cases of Hepburn v. Griswold and Knox v. Lee

"In 1862, Congress granted Lincoln's request to issue $150 million in Treasury notes to finance the war effort during the War Between the States. ... What did 'legal tender' mean? It meant paper money. And it meant that for the first time since the founding of the nation, Americans would be required to accept the federal government's paper money as a medium of exchange. Why was that important to Abraham Lincoln? Like so many other government officials in history, Lincoln was resorting to the printing press — inflation — to finance his war expenditures."
Related Topics: American War Between the States, Money, Enumerated Powers
The Latest Defamation of Jefferson, by Thomas DiLorenzo, 31 Mar 2006
Criticizes a conference titled "Mr. Jefferson Goes to the Middle East" and implying that George W. Bush is somehow Jeffersonian, by contrasting Jefferson and Lincoln's (and by extension Bush's) policies and actions

"Lincoln was the anti-Jefferson. ... Lincoln waged the bloodiest war in American history to destroy the Jeffersonian states' rights doctrine. ... Lincoln's overriding purpose in his war was to destroy the secessionist and states' rights principles of the Declaration (while using slick rhetoric designed to pretend that he revered the document). ... Lincoln eviscerated constitutional liberty by illegally suspending habeas corpus, shutting down the opposition press, imprisoning thousands of political opponents, confiscating firearms, and many other atrocities."
Related Topics: Standing Armies, George W. Bush, Foreign Entanglements, Thomas Jefferson
Warring as Lying Throughout American History, by James Bovard, Future of Freedom, Feb 2008
Recounts how U.S. Presidents and their administrations since James Polk have lied about wars, from start to finish

"In 1846, James K. Polk took Americans to war after falsely proclaiming that the Mexican army had crossed the U.S. border and attacked a U.S. army outpost — 'shedding the blood of our citizens on our own soil.' Though Polk refused to provide any details of where the attack occurred, the accusation swayed enough members of Congress to declare war against Mexico. Congressman Abraham Lincoln vigorously attacked Polk for his deceits. But Lincoln may have studied Polk's methods, since they helped him whip up war fever 15 years later."
Related Topics: Bill Clinton, Gulf War, Nicaragua, Ronald Reagan, Franklin D. Roosevelt, Terrorism, Vietnam War, War, Woodrow Wilson, World War II

The Real Lincoln: A New Look at Abraham Lincoln, His Agenda, and an Unnecessary War
by Thomas DiLorenzo, Walter E. Williams (Foreword), 2002
Partial contents: Lincoln's Opposition to Racial Equality - Why Not Peaceful Emancipation? - Lincoln's Real Agenda - The Myth of Secession as "Treason" - Was Lincoln a Dictator? - Waging War on Civilians - Reconstructing America - The Great Centralizer
Related Topic: American War Between the States

The introductory paragraph uses material from the Wikipedia article "Abraham Lincoln" as of 27 May 2018, which is released under the Creative Commons Attribution-Share-Alike License 3.0.