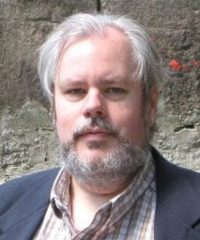 Roderick Tracy Long (born 4 February 1964) is an American professor of philosophy at Auburn University and libertarian blogger. He also serves as an editor of the Journal of Ayn Rand Studies, director and president of the Molinari Institute, and a Senior Fellow at the Center for a Stateless Society.

"Roderick T. Long is Professor of Philosophy at Auburn University, President of the Molinari Institute and Molinari Society, and a Senior Scholar of the Ludwig von Mises Institute. He received his philosophical training at Harvard (A.B. 1985) and Cornell (Ph.D. 1992) and has taught at the University of North Carolina at Chapel Hill and the University of Michigan. Among his books are, Reason and Value: Aristotle versus Rand (2000) and Wittgenstein, Austrian Economics, and the Logic of Action (forthcoming from Routledge) ..."

Libertarianism: The Moral and the Practical, by Sheldon Richman, Future of Freedom, May 2014
Explores whether libertarian policies ought to be based on moral or practical bases, with insigths from Aristotle, Adam Smith, Tibor Machan, Roderick Long and others

"That seems like a promising approach, but as Roderick Long points out, there's a problem: 'It has often been claimed that indirect utilitarianism is unstable, and must collapse either into direct utilitarianism on the one hand or into "rules fetishism" on the other.' ... Long writes, 'Most people are unlikely to find the deontological case for a given course of action compelling so long as they believe it would have terrible consequences; likewise, they are equally unlikely to find the consequentialist case compelling so long as they believe that the action violates human dignity, or equality, or liberty.'"
Related Topics: Aristotle, Ethics, Libertarianism, Tibor Machan, Adam Smith
One Moral Standard for All, by Sheldon Richman, The Goal Is Freedom, 15 Nov 2013
Postulates that most nonlibertarians agree that initiation of force is wrong, but they have to be shown that the same moral standard should hold for private individuals and government personnel

"[Eudaimonism,] Roderick Long writes, "means that virtues like prudence and benevolence play a role in determining the content of justice, but also — via a process of mutual adjustment — that justice plays a role in determining the content of virtues like prudence and benevolence." ... the libertarian principle ... establishes the most fundamental equality of all persons ... what Long calls equality of authority ... Long traces out a key implication of this idea: "Lockean equality involves not merely equality before legislators, judges, and police, but, far more crucially, equality with legislators, judges, and police.""
Related Topics: Government, Libertarianism, John Locke, Non-aggression Principle

Ancient Greece's Legacy for Liberty: Personal Freedom in Athens, 24 Sep 2015
Discusses the political system of ancient Athens and the personal liberties it afforded its citizens, resident aliens and slaves

"What was the Athenian political system, and how favorable or unfavorable was it to personal liberty? We call Athens a democracy; they called themselves one. ... But Athens was never a pure majoritarian system. ... In addition to its legal structure, Athenian democracy had an ideology that was, at least in principle, broadly favorable to liberty. ... Athenian commitment to being free to live as one pleases may have had its limits, but the idea was there, and it was implemented to an impressive extent."
Related Topics: Benjamin Constant, Democracy, Individual Liberty, Freedom of Speech
Ayn Rand, Stanford Encyclopedia of Philosophy, 8 Jun 2010
Major sections: Introduction - Ethics - Social-Political Philosophy - Aesthetics - Bibliography; last substantive revision 19 Sep 2016

"Ayn Rand (1905–1982) was a novelist-philosopher who outlined a comprehensive philosophy, including an epistemology and a theory of art, in her novels and essays. ... The Fountainhead brought Rand international fame, and Atlas Shrugged (1957) sealed this fame. By 1958, Rand's novels, increasingly philosophical, had won her ideas a sufficiently devoted following for her to form, in association with psychologist Nathaniel Branden (with whom she later broke), an official 'Objectivist' philosophical movement, complete with journals and lecture courses."
Related Topic: Ayn Rand
Emerson, Ralph Waldo (1803-1882), The Encyclopedia of Libertarianism, 15 Aug 2008
Biographical essay

"Ralph Waldo Emerson, a Massachusetts native, was one of the founders of Transcendentalism, a philosophical, literary, and cultural movement that stressed spiritual oneness with nature, reliance on inner experience, and rejection of social conformity. ... he favored 'free trade with all the world without toll or custom-houses' and was skeptical of the practicability of top-down, governmentally imposed solutions to social problems. Small wonder that individualist anarchists ... who sought to achieve socialist ends by free-market means, found Emerson a congenial spirit."
Related Topics: Ralph Waldo Emerson, American War Between the States, Government
Ethics Study Guide: Aristotle
Part of study guide to Prof. Long's introductory ethics course; includes biographical details, comments on Aristotle's ethical and political writings, short introductions to Rethoric and Nichomachean Ethics and study questions

"Aristotle believes that most of his fellow Greeks are mistaken about the nature of the human good, identifying it with wealth or power rather than with virtuous activity. ... Aristotle's theories have been seen as a mere transcription of existing mores only because modern scholars have mistakenly read Aristotle's outlook back into the mores that he is in fact criticizing. ... But a careful reading of his works shows that Aristotle was keenly aware of, and bitterly opposed to, the centralizing political trends of his day."
Related Topics: Aristotle, Dialectics, Ethics
Libertarian Anarchism: Responses to Ten Objections, 6 Aug 2004
Transcript of talk given at the 2004 Mises University. First makes the case for anarchism and then responds to objections others have raised against it

"Government Is Not a Coercive Monopoly ... Hobbes: Government Is Necessary for Cooperation ... Locke: Three 'Inconveniences' of Anarchy ... Ayn Rand: Private Protection Agencies Will Battle ... Robert Bidinotto: No Final Arbiter of Disputes ... Property Law Cannot Emerge from the Market ... Organized Crime Will Take Over ... The Rich Will Rule ... Robert Bidinotto: The Masses Will Demand Bad Laws ... Robert Nozick and Tyler Cowen: Private Protection Agencies Will Become a de facto Government"
Related Topic: Anarchism
Liberty in the Ancient World, The Encyclopedia of Libertarianism, 15 Aug 2008
Surveys the ancient civilizations in Sumeria, Hebrew Palestine, China, Greece and the Roman Republic and Empire, and their thoughts and practices about liberty

"Posterity's debt to the great civilizations of antiquity is enormous, but this legacy can hardly be regarded as consistently libertarian. ... Athenian society had many libertarian aspects. Its economic and intellectual freedom attracted merchants and philosophers from all over the Greek world. ... Cicero saw Roman law as an embodiment of the universal Natural Law of the Stoics and described the state's proper function as defense of property. ... it can be argued that the Christian emphasis on the sacred value of the individual soul laid the foundation for the development of theories of individual rights."
Related Topics: China, Benjamin Constant, Greece, India, Liberty
Robert Nozick, Philosopher of Liberty, The Freeman, Sep 2002
Focuses mainly on Nozick's contributions in Anarchy, State, and Utopia, with brief reference to his later works and his death earlier in 2002

"As a child in his native Brooklyn, so the tale goes, young Nozick had been in the habit of asking street-corner preachers and soapbox orators, concerning whatever point of view they had been confidently expounding, 'How do you know that?' One presumes that his question met with a chilly reception; if so, he would have been well prepared for the reaction to Anarchy, State, and Utopia ..., which was often greeted with incredulity and outrage."
Related Topics: Anarcho-Capitalism, Libertarianism, Robert Nozick, Society, Taxation
The Justice and Prudence of War: Toward A Libertarian Analysis, Mises Daily, 20 Sep 2006
Examines the ethics of war from a libertarian perspective, considering both deontological and consequentialist claims

"The morality of warfare is an issue that has long divided libertarians. ... A libertarian analysis of war must take into account not only the actual conduct of warfare but also the means of supplying the war machine. Under libertarian equality, funding a military through taxation is ruled out, as is manning it with slave labor. Conscription is obviously incompatible with libertarian principles; but even ordinary military contracts violate the inalienable right to quit one's job at will."
Related Topics: Government, Libertarianism, Ludwig von Mises, Non-aggression Principle, War
The Myth of 19th-Century Laissez-Faire: Who Benefits Today?, 10 Jun 2013
Responds to questions posed by Michael Lind and E. J. Dionne Jr. regarding lack of actual libertarian countries or the late 19th century supposedly small government utopia

"Libertarianism is great for ordinary people, but not for the power elites that control countries and determine what policies they implement, and who don't welcome seeing their privileged status subjected to free-market competition. And ordinary people don't agitate for libertarian policies because most of them are not familiar with the full case for libertarianism's benefits, in large part because the education system is controlled by the aforementioned elites."
Related Topics: Libertarianism, Benjamin Tucker

Are You an Anarchist?, The Lew Rockwell Show, 14 Nov 2008
Long explains what is anarchism and describes his intellectual influences
Related Topic: Anarchism

The introductory paragraph uses material from the Wikipedia article "Roderick T. Long" as of 22 Jan 2018, which is released under the Creative Commons Attribution-Share-Alike License 3.0.