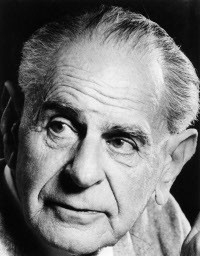 Sir Karl Raimund Popper CH FBA FRS (28 July 1902 – 17 September 1994) was an Austrian-British philosopher and professor. He is generally regarded as one of the 20th century's greatest philosophers of science.

Karl Popper, an eminent philosopher and social theorist, was born in Vienna, but subsequently became a British subject. When young, Popper was intellectually precocious and had a keen interest in science, psychology, and, subsequently, philosophy ... Popper also is well known for his writings on social philosophy. His books Open Society and Its Enemies and The Poverty of Historicism, both written during the Second World War, were powerful attacks on Plato, Marx, and their arguments in favor of historical inevitability as enemies of an open society.
Related Topics: Epistemology, F. A. Hayek, Society

The life and times of F.A. Hayek, who explained why political liberty is impossible without economic liberty, by Jim Powell, 2000
Lengthy biographical essay, with extensive quotes; alternate version of "The Worst on Top" chapter of The Triumph of Liberty (2000)

Internationally-acclaimed philosopher Karl R. Popper confided to Hayek, "I think that I have learned more from you than from any other living thinker ..." ... Hayek had ... Popper speak at a seminar, and Popper expanded it into his most controversial book, The Open Society and Its Enemies (1945), a passionate attack on Plato and Karl Marx; Hayek helped find a publisher and persuaded colleagues at the London School of Economics to give Popper a teaching position—rescuing him from a hostile academic environment in New Zealand. Through[out] ... Hayek's life, Popper remained his closest friend.
Related Topics: Capitalism, Democracy, Milton Friedman, Government, F. A. Hayek, Frank Knight, Law, Rule of Law, Liberty, Carl Menger, Ludwig von Mises, Money, Mont Pelerin Society, Nobel Prize, George Orwell, Socialism, Thomas Sowell, Vienna
The Spirit of Humility [PDF], by Stanley Kober, Cato Journal, 1997
Discusses the recognition of the limits on human knowledge, which the author claims leads to the title spirit as evidenced in "the American experiment" and its possible lessons for European unification

That spirit [of humility] is also the spirit of modern science, but it was not always this way. In the Novum Organum, written in 1620, Francis Bacon defined empirical inquiry as an effort 'to seek, not pretty and probable conjectures, but certain and demonstrable knowledge.' ... Modern science takes a different view. In the words of Karl Popper (1969: 115), 'Scientific theories ... are genuine conjectures—highly informative guesses about the world which although not verifiable (i.e., capable of being shown to be true) can be submitted to severe critical tests.'
Related Topics: John Adams, United States Declaration of Independence, Adam Ferguson, Benjamin Franklin, Limited Government, Lebanon, Freedom of Speech, Taxation, George Washington

An Interview with Robert Nozick, by Robert Nozick, Julian Sanchez, 26 Jul 2001
Topics discussed include: ethics, science and philosophy, Karl Popper and the scientific method, Ayn Rand and epistemology, consciousness, relativism and the academic left and Nozick himself

JS: Many libertarians know Karl Popper for his book The Open Society and Its Enemies, and you discuss some of Popper's ideas about scientific method in Invariances.
RN: The book contains ... a new argument against his anti-inductivism. Popper is famous for saying that induction can't be justified, that the only inferences that data support are to deductive consequences of the data ...
Popper's anti-inductive conclusions were always held to be counterintuitive, even ridiculous, but he swallowed them, and so did his followers. Now I'm saying something stronger than has been said thus far, namely, that their view is incoherent.
Related Topics: Evolution, Libertarianism, Philosophy, Ayn Rand

The introductory paragraph uses material from the Wikipedia article "Karl Popper" as of 5 Aug 2018, which is released under the Creative Commons Attribution-Share-Alike License 3.0.