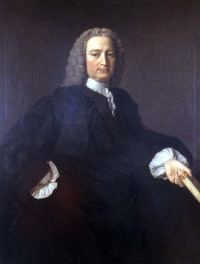 Francis Hutcheson (8 August 1694 – 8 August 1746) was an Irish philosopher born in Ulster to a family of Scottish Presbyterians who became known as one of the founding fathers of the Scottish Enlightenment. He is remembered for his book A System of Moral Philosophy.

Francis Hutcheson was an eighteenth-century Scottish philosopher whose meticulous writings and activities influenced life in Scotland, Great Britain, Europe, and even the newly formed North American colonies. For historians and political scientists, the emphasis has been on his theories of liberalism and political rights; for philosophers and psychologists, Hutcheson's importance comes from his theories of human nature, which include an account of an innate care and concern for others and of the internal senses (including the moral sense).
Hutcheson, Francis (1694-1746), by George H. Smith, The Encyclopedia of Libertarianism, 15 Aug 2008
Biographical essay

Francis Hutcheson is considered a major figure in the Scottish Enlightenment. Born in Ireland, he spent the last 17 years of his life as a professor of moral philosophy at the University of Glasgow. Through his books and teaching at Glasgow, he exerted considerable influence on Adam Smith, David Hume, and other 18th-century moral philosophers. ... In contrast to these enforceable rights to life, property, contract, and personal liberty—like John Locke, Hutcheson maintains that 'each man is the original proprietor of his own liberty.' Hutcheson also categorized some rights as imperfect.

Hutcheson's two primary works are the Inquiry into the Original of our Ideas of Beauty and Virtue (1725) and An Essay on the Nature and Conduct of the Passions and Affections, with Illustrations of the Moral Sense (1728). The remainder of his corpus includes: Synopsis Metaphysicae, Ontologiam et Phneumatologiam Complectens (1744), Philosophiae Moralis Institutio Compendiaria (1743), Reflections upon Laughter and Remarks Upon the Fable of the Bees (1750), and A System of Moral Philosophy - published posthomously by his son in 1755.

Francis Hutcheson (1694-1746) was educated at the University of Glasgow, where he assumed the chair of Moral Philosophy in 1729.

Adam Smith—"I had almost forgot that I was the author of the inquiry concerning The Wealth of Nations", by Jim Powell, The Freeman, Mar 1995
Biographical essay

Glasgow University was famed for its teaching, in part because professors were compensated directly by student fees. They had an incentive to perform well. Smith studied with moral philosopher Francis Hutcheson, a forceful character who broke with tradition and delivered his lectures in English instead of Latin. Hutcheson expressed a passion for reason, liberty, and free speech, inspiring Smith ... To be sure, Smith was his own man, disagreeing with Hutcheson on some key issues. Hutcheson, for example, believed that self-love was a bad thing and that only well-intended actions were virtuous.
Related Topics: France, Government, David Hume, Bernard Mandeville, Adam Smith
Economic Ideas: Francis Hutcheson and a System of Natural Liberty, by Richard Ebeling, William Holden, 21 Nov 2016
Discusses the main themes in Hutcheson's System of Moral Philosophy

... Francis Hutcheson ... took up his position at the University of Glasgow in 1730, and held it until his death in 1746 during a visit to his native country. ... His major and most influential work, A System of Moral Philosophy (1737), laid out many of the themes that later Scottish thinkers would pick up in one form or another. Though religious in his beliefs, Hutcheson argued that it is man's human reason and his experiential understanding that could guide us in comprehending the reality of the world in which we live, and judging best the institutions that would further mankind's condition.
Related Topics: Property Rights, Scotland, Adam Smith
Francis Hutcheson: teacher of Adam Smith, by Murray N. Rothbard, Economic Thought Before Adam Smith, 1995
Excerpted from chapter 15, section 15.2; discusses Hutcheson's life, the main economic themes in his writings and his criticism of Mandeville

Hutcheson brought to Scottish philosophy a solid belief in natural rights and in the beneficence of nature. ... Francis Hutcheson was a stimulating and dynamic lecturer, who introduced the style of pacing up and down in front of his class. ... Hutcheson perceptively defines 'use' highly subjectively, not simply as a good which naturally yields pleasure, but as 'any tendency to give any satisfaction, by prevailing custom or fancy.' ... The division of labour is a key to the preservation of human life, and Hutcheson shows the enormous advantages of specialization, skill, and exchange over the puny productivity of an isolated Crusoe.
Related Topics: Broken Window Fallacy, Bernard Mandeville, Money, Adam Smith
Self-Interest and Social Order in Classical Liberalism: Bernard Mandeville v. Francis Hutcheson, by George H. Smith, 23 Jan 2015
Discusses the views of Hobbes and Mandeville regarding society and the need for government and the critiques of the latter made by Hutcheson and Adam Smith

Hutcheson (in Remarks [Upon The Fable of the Bees]) replied by invoking opportunity costs ... Consider the drunkard who neglects his family to buy liquor, or the dandy who buys expensive clothes that he cannot reasonably afford. According to Mandeville, such excesses benefit society because someone must produce the liquor and clothes needed to satisfy those vices. But, as Hutcheson pointed out, if the drunkard had spent his money on food and clothes for his family instead of on liquor, that alternative would also have created employment. The same reasoning applies to the dandy and his expensive clothes ...
Related Topics: Bernard Mandeville, Adam Smith
Student at Glasgow College, by John Rae, Life of Adam Smith, 1895
Chapter II of Life of Adam Smith, covering the years 1737 to 1740, and delving mostly on Smith's Moral Philosophy professor, Francis Hutcheson

Hutcheson was exactly the stamp of man fitted to stir and mould the thought of the young. He was, in the first place, one of the most impressive lecturers that ever spoke from an academic chair. Dugald Stewart, who knew many of his pupils, states that every one of them told of the extraordinary impression his lectures used to make on their hearers. He was the first professor in Glasgow to give up lecturing in Latin and speak to his audience in their own tongue, and he spoke without notes and with the greatest freedom and animation. Nor was it only his eloquence, but his ideas themselves were rousing.
Related Topic: Adam Smith

Giants of the Scottish Enlightenment Part One: Francis Hutcheson, by James Stacey Taylor, 7 Dec 2011
Discusses the philosophical views of Francis Hutcheson, in particular the argument that human beings, in addition to the five traditionally recognized senses, have a public sense, a sense of honor and a moral sense

And one of the giants of the Scottish Enlightenment is Francis Hutcheson. Hutcheson was not himself Scots, he was Irish. But, he moved to Scotland as soon as he possibly could, which is a hallmark of his obvious genius. Hutcheson was fantastic. Hutcheson is the Scottish Enlightenment equivalent of a blue touch paper on a firework. You light it and it starts burning, burning and then suddenly the whole thing just explodes, because Hutcheson has a tremendous influence on many of his contemporaries. In particular, he has influence on Adam Smith and David Hume.
Related Topics: Ethics, Philosophy

The introductory paragraph uses material from the Wikipedia article "Francis Hutcheson (philosopher)" as of 10 Jul 2018, which is released under the Creative Commons Attribution-Share-Alike License 3.0.