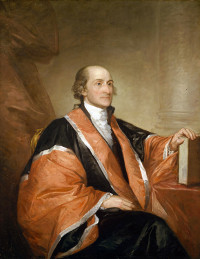 John Jay (12 December 1745 – 17 May 1829) was an American statesman, patriot, diplomat, one of the Founding Fathers of the United States, negotiator and signatory of the Treaty of Paris of 1783, second Governor of New York and the first Chief Justice of the United States (1789-1795). He directed U.S. foreign policy for much of the 1780s and was an important leader of the Federalist Party after the ratification of the United States Constitution in 1788.

JOHN JAY was born on December 12, 1745, in New York, New York, and grew up in Rye, New York. ... Jay favored a stronger union and contributed five essays to The Federalist Papers in support of the new Constitution. President George Washington nominated Jay the first Chief Justice of the United States on September 24, 1789. The Senate confirmed the appointment on September 26, 1789. In April 1794, Jay negotiated a treaty with Great Britain, which became known as the Jay Treaty. After serving as Chief Justice for five years, Jay resigned from the Supreme Court on June 29, 1795, and became Governor of New York.

Of all the Founding Fathers, no other filled as many high offices as John Jay. He served as President of the Continental Congress, Minister to Spain during the Revolution, Chief Justice of New York, Governor of New York, member of the New York provincial Congress, special envoy to Great Britain, Secretary of Foreign Affairs under the Articles of Confederation and was appointed first Chief Justice of the United States Supreme Court by President George Washington. ... Historians may often minimize John Jay's accomplishments, but they were invaluable to a struggling, infant nation.
Related Topics: United States Constitution, New York
John Jay - Online Library of Liberty
Includes portrait, short biography and links to various of Jay's works and links to selected quotations

The Papers of John Jay is an image database and indexing tool comprising some 13,000 documents (more than 30,000 page images) scanned chiefly from photocopies of original documents. Most of the source material was assembled by Columbia University's John Jay publication project staff during the 1960s and 1970s under the direction of the late Professor Richard B. Morris. These photocopies were originally intended to be used as source texts for documents to be included in a planned four-volume letterpress series entitled The Selected Unpublished Papers of John Jay, of which only two volumes were published.

Biographies ... New York Politics in Jay's Lifetime ... Foreign Affairs During the Revolution and Confederation Period ... Jay, the Constitution, and 'The Federalist' ... The Early Supreme Court ... National Politics in the Federalist Era ... The Jay Treaty ... The Jay Family and Social Reform: Religion and Slavery ... Miscellany

Empire or Liberty: The Antifederalists and Foreign Policy, 1787-1788 [PDF], by Jonathan Marshall, The Journal of Libertarian Studies, 1980
Describes the arguments regarding foreign policy made during the period of ratification of the United States Constitution by the Federalists and the counterarguments, "largely ignored" by historians, from the Antifederalists

John Jay, who had as much foreign experience as any framer of the Constitution, was no less an expansionist. Indeed, his case for 'the best possible state of defense' under a strong central government rested on the assumption of an expanding empire. The European powers, he observed, were jealous of their status and would try to hem in the United States, to prevent it from reaching its full commercial and territorial potential. ... Only a united America could work its will on the continent. This was an argument not for national security, but rather for national destiny.
Related Topics: American War Between the States, Standing Army, Foreign Entanglements, Benjamin Franklin, Greece, Patrick Henry, Imperialism, James Madison, George Mason, Massachusetts, Taxation, United States, War
John Adams, by John Fiske, The Presidents of the United States, 1789-1914, 1914
Biographical sketch; includes picture of Adams (painting by Gilbert Stuart), photograph of houses where he was born; facsimile of a letter with his signature, and a section on his wife Abigail

The designs of the French government were first suspected by John Jay, soon after his arrival in Paris. He found that Vergennes was sending a secret emissary ... that the right of the United States to the Mississippi valley was to be denied; and he got hold of a despatch from Marbois ... to Vergennes, opposing the American claim to the Newfoundland fisheries. As soon as Jay learned these facts he proceeded ... to take steps toward a separate negotiation between Great Britain and the United States. When Adams arrived in Paris, October 26, he coincided with Jay's views, and the two together overruled Franklin.
Related Topics: John Adams, United States Declaration of Independence, Thomas Jefferson, Freedom of Speech, George Washington

NUMBER II. Concerning Dangers from foreign Force and Influence, The Federalist, 31 Oct 1787
Drawing a parallel with the wisdom of the Congress of 1774, that led to the Independence Declaration, recommends approval of a Union under a single national government rather than being "split into a number of unsocial, jealous, and alien sovereignties"

WHEN the people of America reflect that they are now called upon to decide a question, which, in its consequences, must prove one of the most important that ever engaged their attention, the propriety of their taking a very comprehensive, as well as a very serious, view of it, will be evident. Nothing is more certain than the indispensable necessity of government ... I sincerely wish that it may be as clearly foreseen by every good citizen, that whenever the dissolution of the Union arrives, America will have reason to exclaim, in the words of the poet: "FAREWELL! A LONG FAREWELL TO ALL MY GREATNESS."
Related Topics: Government, United States
Federalist No. 3: The Same Subject Continued: Concerning Dangers from Foreign Force and Influence
Argues for the Constitution and a single national government, since it would be more efficient, its decisions would be "more wise, systematical, and judicious", have "wisdom and prudence" and attain peace "more perfectly and punctually"

Among the many objects to which a wise and free people find it necessary to direct their attention, that of providing for their SAFETY seems to be the first. ... Let us therefore proceed to examine whether the people are not right in their opinion that a cordial Union, under an efficient national government, affords them the best security that can be devised against HOSTILITIES from abroad. ... the administration, the political counsels, and the judicial decisions of the national government will be more wise, systematical, and judicious than those of individual States ... as well as more SAFE with respect to us.
Related Topic: War
Federalist No. 4: The Same Subject Continued: Concerning Dangers from Foreign Force and Influence
Considers the potential of invasion on Great Britain's constituent countries (if they had separate armies and fleets) and the United States if divided into 13 states or three or four confederacies, arguing for the advantages of centralization

MY LAST paper assigned several reasons why the safety of the people would be best secured by union against the danger it may be exposed to by JUST causes of war given to other nations; and those reasons show that such causes would not only be more rarely given, but would also be more easily accommodated, by a national government than either by the State governments or the proposed little confederacies. ... How liable would she become not only to their contempt but to their outrage, and how soon would dear-bought experience proclaim that when a people or family so divide, it never fails to be against themselves.
Related Topics: United Kingdom, War
Federalist No. 5: The Same Subject Continued: Concerning Dangers from Foreign Force and Influence
Ironically argues that separate confederacies, specifically Northern and Southern, may result in conflict between them since one could be at war with a foreign nation with which the other wants to be at peace

QUEEN ANNE, in her letter of the 1st July, 1706, to the Scotch Parliament, makes some observations on the importance of the UNION then forming between England and Scotland, which merit our attention. ... How many conquests did the Romans and others make in the characters of allies, and what innovations did they under the same character introduce into the governments of those whom they pretended to protect. Let candid men judge, then, whether the division of America into any given number of independent sovereignties would tend to secure us against the hostilities and improper interference of foreign nations.
Related Topics: American War Between the States, United Kingdom
Federalist No. 64: The Powers of the Senate
Discusses the appropriateness of the Constitutional clause (Article II, Section 2) conferring power on the President to make treaties "with the advice and consent" of two thirds of the Senators

As the select assemblies for choosing the President, as well as the State legislatures who appoint the senators, will in general be composed of the most enlightened and respectable citizens, there is reason to presume that their attention and their votes will be directed to those men only who have become the most distinguished by their abilities and virtue, and in whom the people perceive just grounds for confidence. ... As to corruption, the case is not supposable. ... who can think it probable that the President and two thirds of the Senate will ever be capable of such unworthy conduct.
Related Topic: United States Constitution

The introductory paragraph uses material from the Wikipedia article "John Jay" as of 2 May 2018, which is released under the Creative Commons Attribution-Share-Alike License 3.0.