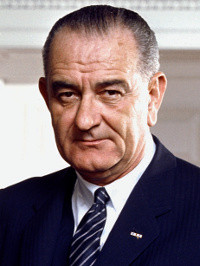 The American Heritage of "Isolationism", by Gregory Bresiger, Freedom Daily, May 2006
Criticizes the use of the word "isolationist" by the media, "internationalists" and other foreign intervention promoters, looking at the heritage of noninterventionism as exemplified by Washington's Farewell Address

Lyndon Johnson in particular incurs Kauffman's wrathful prose. LBJ was "the homicidal Texan in the White House." On Johnson's radio ads imploring Americans to support the troops in Vietnam: "That Americans might best 'support our troops' by reuniting them with their families seems never to occur to those who would choke the country with their yellow ribbons." And on the connection between Johnson's war on poverty and Vietnam: "Johnson declared war on poverty, which he apparently intended to win by killing as many poor boys as possible in Vietnam."
Related Topics: George W. Bush, Bill Kauffman, Abraham Lincoln, The State, Vietnam War, War, George Washington, World War II
Do Elections Guarantee Freedom?, by James Bovard, Freedom Daily, Nov 2007
Discusses whether democratic elections achieve the purported objective of "will of the people" controlling the government

President Lyndon Johnson declared in 1965 that the vote is the most powerful instrument ever devised by man for breaking down injustice and destroying the terrible walls which imprison men because they are different from other men ... During the election campaign the prior year, Johnson had promised, "We are not about to send American boys 9,000 or 10,000 miles away to do what Asian boys ought to be doing to protect themselves." The fact that parents could vote for or against Johnson did nothing to stop him from betraying his promise and sending their sons to die.
Related Topics: George W. Bush, Bill Clinton, United States Constitution, Government, Ronald Reagan, Voting
Ellsberg's Lessons for Our Time, by James Bovard, Freedom Daily, May 2008
Reviews Daniel Ellsberg's Secrets: A Memoir of Vietnam and the Pentagon Papers and how its commentary applies to the then current conflict in Iraq

Ellsberg ... started work in August 1964 on the day the Gulf of Tonkin crisis ignited. ... Within hours ... the ship's commander had wired Washington that the reports of an attack on his ship may have been wildly exaggerated ... But it didn't matter, because this was just the pretext that Lyndon Johnson was looking for. Johnson and Defense Secretary Robert McNamara raced to proclaim that the attack was unprovoked. ... the United States had orchestrated an attack by South Vietnamese commandos on North Vietnamese territory before the alleged conflict began. But Johnson lied and commenced bombing, and Congress rushed to cheer him on.
Related Topics: George W. Bush, Iraq War, Richard Nixon, Vietnam War, War
The Ethics of Voting: Part Three [PDF], by George H. Smith, The Voluntaryist, Apr 1983
Examines, among other things, whether a libertarian can be employed by or hold office in a State entity

In a war crimes trial, President Johnson would not be as liable for a particular murder as the person who physically committed the act. But Johnson shares some liability for a vast number of similar acts. His degree of liability for a particular murder may be less, but his range of liability is far greater ... when we say that President Johnson was "more resonsible" for murders than individual bomber pilots, we mean: (1) [he], utilizing the power of his office, made fundamental decisions that set the State apparatus in motion. (2) [he] was responsible, to whatever degree, for a broader range of casualties ...
Related Topics: Government, Politicians
The Urge to 'Surge', by Justin Raimondo, 15 Dec 2006
Discusses reactions to the Iraq Study Group suggestion supporting "a short-term redeployment or surge of American combat forces to stabilize Baghdad"

If that happens, then George W. Bush will complete his metamorphosis into another Texan in the White House who had to deal with an unpopular war: Lyndon Baines Johnson. We'll have "jobs programs" – and, no doubt, "poverty pimps" (remember them?) ... The "angry young men" of 1960s urban America were neither appeased nor bought off ... President Johnson, you'll remember, launched his War on Poverty in tandem with escalating the Vietnam War, and the political rhetoric and objectives of these losing campaigns were remarkably similar. Both were pacification programs, and they failed in Vietnam, as well as in South Central Los Angeles.
Related Topics: George W. Bush, Imperialism

The introductory paragraph uses material from the Wikipedia article "Lyndon B. Johnson" as of 26 May 2018, which is released under the Creative Commons Attribution-Share-Alike License 3.0.