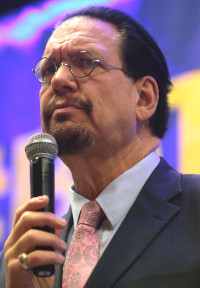 Penn Fraser Jillette (born 5 March 1955) is an American magician, juggler, comedian, musician, inventor, actor, filmmaker, television personality and best-selling author known for his work with fellow magician Teller as half of the team Penn & Teller. The duo have been featured in numerous stage and television shows such as Penn & Teller: Fool Us, and Penn & Teller: Bullshit, and are currently headlining in Las Vegas at The Rio. Jillette serves as the act's orator and raconteur.

As befitting his "loud" status, Jillette talks about his political beliefs at the drop of a rabbit-filled hat. In an interview with the Boston Phoenix (July 2-8, 2004), he said, "Well, I'm a real total-freedom nut, a libertarian, and I'm one of those crazy optimists. Let people do what they want and everything will be okay." On the FilmForce.IGN.com Web site, Jillette said, "I'm a hardcore libertarian. I want everything legal." (October 13, 2003) And in the Cato Institute's Regulation Magazine, he described himself as "a Libertarian, pro-freedom, governs-least-governs-best, free market advocate." (Summer 2001)
Related Topic: Freedom of Speech

Clint Eastwood announces: I'm a "libertarian", Libertarian Party News, 18 Feb 1997
Libertarian Party press release based on Eastwood's response to a Playboy interview question: "How would you characterize yourself politically?"

Libertarian Party member Penn Jillette ... stopped by party headquarters in Washington, DC, for a visit on October 31st. Jillette, the taller and more vocal half of the magical comedy team of Penn & Teller, was in town to promote their new book, How to Play in Traffic, and to perform at the Patriot Center in Virginia. "Penn & Teller's book is a real hoot to read," said Crickenberger. "And, surprisingly for a magic book, there's quite a lot of libertarian rhetoric. Along with a generally irreverent attitude toward government, they call for private road ownership, privatizing NASA, and stopping terrorism with freedom."
Penn Jillette: The magician-comedian-writer's secrets revealed!, by Bryan Curtis, Slate, 4 Feb 2006
Profile of Jillette as a thinker, recounting how his 2005 documentary The Aristocrats came about and his attempts at deconstructing comedy as well as magic

Penn Jillette's place in show business is less as a magician or comedian than as a thinker. A very deep thinker ... Jillette would make for an odd academic. Standing 6 foot 6 inches, wearing his hair in a ponytail, he looks like a man who spends a great deal of his time in a bowling alley ... Yet his snarling stage persona, which is like a sideshow hustler crossed with an insult comic, hides a surprisingly inquisitive mind ... Jillette has made a career out of pulling back the curtain. In his Showtime series Bullshit!, which he hosts with Teller, he investigates everyday scams like heavenly signs appearing in cheese sandwiches ...

Reason: Recently ... you lectured Attorney General Janet Reno on the difference between real blood and stage blood. What ... moved you to comment ... in such a public way?
Penn: ... As far as I'm concerned, we did not move into politics; Janet Reno moved into art. One of the things that Teller and I are obsessed with, one of the reasons that we're in magic, is the difference between fantasy and reality. That is the subject that, if you have a brain in your head, is always dealt with in magic ... So we have always harped on the distinction between reality and illusion, and it really isn't a political issue.
Related Topics: Films, Republican Party, Television Shows

The introductory paragraph uses material from the Wikipedia article "Penn Jillette" as of 16 Jun 2018, which is released under the Creative Commons Attribution-Share-Alike License 3.0.