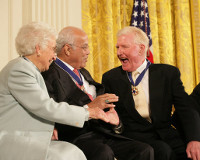 Paul Bede Johnson CBE (born 2 November 1928) is an English journalist, popular historian, speechwriter and author. While associated with the political left in his early career, he is now a conservative popular historian.

At a time when mainstream intellectuals have downplayed the horrors of socialist, communist and welfare state tyrants, British historian Paul Johnson (b. 1928) dramatically exposed their evil ways. ... His most beloved work is Modern Times (1983), the incredibly dramatic story of 20th century tyranny. Until this book came out, it was still fashionable to condemn 'right-wing' totalitarians like the Nazis while ignoring, denying or belittling the barbarism of 'left-wing' totalitarians like Lenin, Stalin, Mao and Pol Pot. Johnson showed they all came from the same totalitarian slime.

Capitalism and the Intellectuals [PDF], by Robert Nisbet, Regulation, Dec 1977
Review of Paul Johnson's The Enemies of Society (1977)

This is the mystery explored by Paul Johnson in his important new book, The Enemies of Society (Atheneum, 1977). Mr. Johnson, a journalist and former editor of the influential English weekly, The New Statesman, is the author of several historical works, including his recent and widely praised A History of Christianity. In his current book, the 'Society' of the title is Western society-more specifically, the liberal democratic, middle class, capitalist society which from the first has had such trouble defending itself against its 'Enemies.' Just who those 'Enemies' are I shall come to later on. They do Mr. Johnson honor.
Related Topics: Capitalism, Prohibition, Joseph Schumpeter, The State
The life and times of Murray N. Rothbard, who showed why private individuals can do just about everything that needs to be done, by Jim Powell
Lengthy biographical essay

Rothbard influenced historian Paul Johnson's interpretation of the Great Depression, presented in his international bestseller Modern Times (1983) and he called the book "an intellectual tour de force, in that it consists, from start to finish, of a sustained thesis, presented with relentless logic, abundant illustration, and great eloquence. I know of few books which bring the world of economic history so vividly to life, and which contain so many cogent lessons, still valid in our own day. It is also a rich mine of interesting and arcane knowledge ... It has stood the test of time, even with panache ..."
Related Topics: American Revolutionary War, analysis, Walter Block, Compulsory Education, John T. Flynn, Foundation for Economic Education, Milton Friedman, Government, F. A. Harper, Karl Hess, Human Action, Manny Klausner, Libertarianism, Man, Economy, and State, Mises Institute, Ludwig von Mises, Money, Monopoly, Property Rights, Ayn Rand, Lew Rockwell, Murray Rothbard, Mark Skousen, The State, Taxation, Vietnam War
Paul Johnson - Hero of the Day, The Daily Objectivist, 2000

British historian Paul Johnson is one of those wizards of the typewriter who can put together very fat books fairly quickly. Plus, they're fun to read and at least 92 percent accurate in fact and analysis. ... Johnson never converted to the word processor. He types up the main part of his manuscript on one machine, and the footnotes on another. ... he used to be a raving left-winger who saw the light and now tells the story of mankind with passion and verve from a staunchly pro-freedom perspective. He doesn't insinuate his opinions in the guise of pseudo-detached pseudo-objectivity. He throws his spirit wholesale into the tale.

Historian Paul Johnson on American Liberty, The Freeman, Jun 1996
Topics discussed include religious freedom, abolishing slavery, the impact of immigration, the Founding Fathers, the U.S. Constitution, individualism, reining in government and the prospects for liberty in America

For friends of freedom, Paul Johnson is perhaps today’s most beloved historian. He tells a dramatic story with moral passion. He gives readers tremendous pleasure as he celebrates liberty and denounces tyranny. ... For decades, history has been the province of academics, but Johnson came up through journalism. Born in Barton, Lancashire, Johnson was educated at Stonyhurst, England's oldest Catholic boarding school, and at Magdalen College, Oxford. ... Johnson has quite a presence. He's 6 feet 1 inch tall, has a ruddy complexion, and a mane of champagne hair. He speaks with a commanding voice.
Related Topics: American War Between the States, United States Constitution, Economic Freedom, Entrepreneurship, Founding Fathers, France, Freedom of Religion, United States

A History of Christianity, 1976
Contents: The Rise and Rescue of the Jesus Sect - From Martyrs to Inquisitors - Mitred Lords and Crowned Ikons - The Total Society and its Enemies - The Third Force - Faith, Reason and Unreason - Almost-Chosen Peoples - The Nadir of Triumphalism
A History of the American People, 1997
Contents: Colonial America, 1580-1750 - Revolutionary America, 1750-1815 - Democratic, 1815-1850 - Civil War, 1850-1870 - Industrial, 1870-1912 - Melting-Pot, 1912-1929 - Superpower America, 1929-1960 - Problem-Solving, Problem-Creating America, 1960-1997
Related Topic: United States
A History of the Jews, 1987
Contents: Prologue - Part one: Israelites - Part Two: Judaism - Part Three: Cathedocracy - Part Four: Ghetto - Part Five: Emancipation - Part Six Holocaust - Part Seven: Zion - Epilogue
Modern Times: The World from the Twenties to the Nineties, 1983
Partial contents: A Relativist World - The First Despotic Utopias - An Infernal Theocracy, a Celestial Chaos - The High Noon of Aggression - Superpower and Genocide - America's Suicide Attempt - The Collectivist Seventies - The Recovery of Freedom
Napoleon, May 2002
Contents: The Corsican background - Revolutionary, General, Consul, Emperor - The Master of the Battlefield - The Flawed and Fragile Empire - The Graveyards of Europe - Elba and Waterloo - The Long Good-bye
Related Topic: France
The Renaissance: A Short History, 2000
Contents: Historical and Economic Background - The Renaissance in Literature and Scholarship - Anatomy of Renaissance Sculpture - Buildings of the Renaissance - Apostolic Successions of Renaissance Painting - The Spread and Decline of the Renaissance

The introductory paragraph uses material from the Wikipedia article "Paul Johnson (writer)" as of 17 May 2018, which is released under the Creative Commons Attribution-Share-Alike License 3.0.